What’s in a name?

In the summer, discussions on the name had led to a decision to drop references to Universal given potential anti-trust wranglings that CBS had pointed out. Hence the names USI and the Universal Musical Instrument Interface (UMII, pronounced you-me) proposed by the Japanese were discarded in favour of MIDI (Musical Instrument Digital Interface) suggested by Smith. 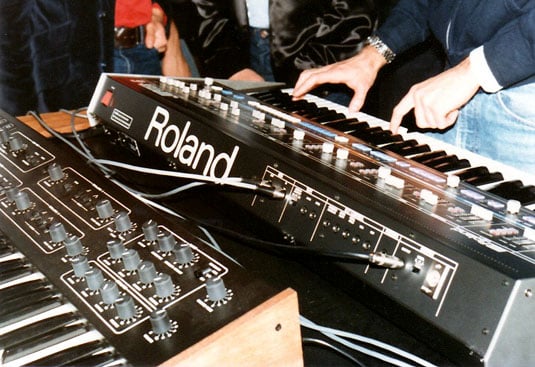 By October 1982, the draft version of the MIDI spec had been drawn up and the Sequential Prophet 600 began shipping with the on-board interface in December that year.

It might not have been an official standard back then, but it brought attention to the interface. The highlight was the January 1983 NAMM Show where the first display of two connected MIDI devices was successfully demonstrated. 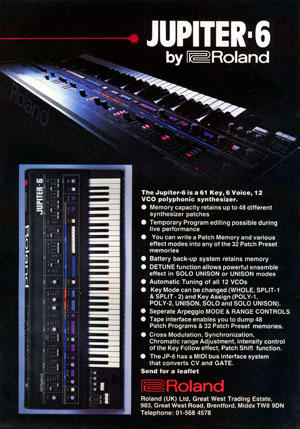 Still a fair few knobs and sliders on the JP-6 but that would change
as digital tech featured more on synths, minimising physical controls
Click for a larger image

Here, Roland was keen to show it off on its Jupiter-6 (JP-6) and all went well with it hooked up to a Sequential Prophet 600. However, a few did raise the odd eyebrow as the Sequential Prophet 600 sent out its arpeggiator note data, whereas the Roland JP-6 did not. Apparently, the Roland synth had the correct implementation but with the spec still not yet set in stone, a few grey areas remained. Roland’s JX-3P synth would follow in March and a real synthesis game changer, Yamaha’s DX7, appeared in June.

The DX7 was a case in point for getting the spec finalised, as Yamaha had misinterpreted the meaning of mono mode. The idea was a single voice per channel (which could mean different sounds on each channel, thus becoming multitimbral) but Yamaha presumed it to mean a polyphonic synth turned into a monophonic one. There were other issues too regarding velocity sensitivity, the DX7 only went up to 100 and didn’t use the maximum range up to 127. 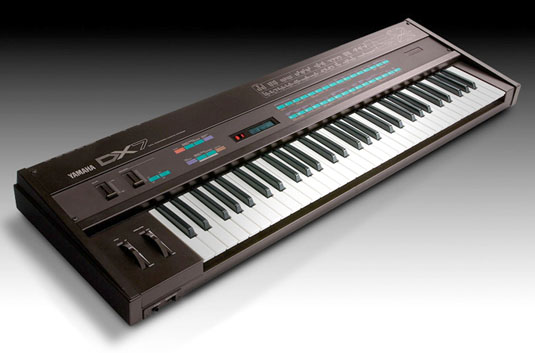 With MIDI essentially open to all, the potential for chaos was becoming evident and so the way the specification could be utilised was tightened up. Meanwhile, the companies involved in MIDI instrument-making were having to deal with the vested interests of some – who were trying to take the credit for all of it – while others, who hadn’t backed MIDI, lambasted the spec from the sidelines.

Another issue for Smith and Sequential was how to get new features accepted without showing your hand on why you’d want them. For instance, the mono mode that Yamaha didn’t understand was to be used to deliver a multitimbral instrument and Sequential had the Six-Trak in the works to do just that. To Sequential this was an obvious evolution, which it certainly became, and it wanted to steal a march on the Japanese.

During the summer of 1983, the Japanese MIDI Standards Committee (JMSC) was established to ensure best practice for MIDI implementation and suchlike. Not long after, the official MIDI 1.0 specification was published in August 1983. The indifference of US instrument manufacturers showed itself for a time, as there was no representative trade body. The US-based International MIDI Association (IMA) had materialised in late 1983 but was essentially a users’ group. The was no shortage of opinions in the IMA, but held no sway with the actual instrument makers.

Finally, in June 1984, the MIDI Manufacturers Association (MMA) came into being with audio engineering legend Tom Oberheim at the helm. Information on all things MIDI can be found on the MMA site, with many useful extracts. However, the complete up-to-date MIDI spec is not free and is only available in printed form. It can be purchased here.

What MIDI did was to simplify the physical communication between musical devices whilst simultaneously expanding the capabilities of electronic instruments in astonishing ways.

In essence, MIDI is just a communications protocol and what made it so alluring to musicians is that gear equipped with the interface could talk to each other. Instead of having stands full of keyboards like a 1970s progressive rock band, you could have one master keyboard that could be hooked up to a rack of tone modules – keyboardless synthesisers. More to the point, the keyboard itself didn’t have to have its own synthesiser either, it could function as a controller and rely on those in the rack to produce the sounds.

Why would you want a dumb keyboard? Well, you could buy one with nice weighted keys that give a piano-like touch – Yamaha’s KX-88 was a popular choice – and keep it for years. You’d only replace the synths in the rack as new models became available which were either cheaper as they were sans keyboard or more powerful with better polyphony and more audio outputs. For session musicians, having the latest synth sounds has always been an important aspect when it comes to being hired and, ideally, they’d want a performance keyboard with a few choice tone modules.

In MIDI land, if a device had a human interface that you could strike to produce note data, then it was potentially a controller. So you could have quirky situations where a drum machine would play notes on a synthesiser. Indeed, as MIDI drum machines were primitive note recorders, you could use them for more than just beatbox tasks. Each drum sound had its own MIDI note value and with some aforethought, you could program basslines and the like on them. Roland’s classic TR-909 drum machine even had a separate MIDI track for this purpose and I spent many a day sequencing this way.

The typical drawback was the short note duration from a drum machine which could be remedied slightly at the synth end by tweaking the release time. You could, of course, play actual drum machine rhythm patterns into synths, but you’d soon wish you hadn’t as you’d discover them to be repetitive and most likely atonal with dubious musical merits.

Simple MIDI device chain: red cable SY22 MIDI Out to TX7 MIDI In, yellow cable TX7 MIDI Thru to MKS-50 MIDI In
Other cables are audio and power – a Fostex 250 4-track is to the right
Click for a larger image

Using MIDI you could connect the keyboard to work as a controller on the drum machine and access these sounds like it was another rack module. Complete drum kits equipped with MIDI were an alternative that appeared where drum sounds were triggered from pads. While some would complain that the pads didn't feel the same as drums' skins, pads allowed different drum modules or sampled kits to be used and could capture performances that would sound more expressive and realistic. They were ideal for practice too: MIDI drum kits are more popular than ever.

Next page: All you ever want to know about MIDI but were afraid to ask
Page: