So what did the musician or programmer actually have to grapple with? From the outside it doesn’t look like much. The 180˚ five-pin DIN plugs used on the cable had only three pins connected – ground (pin 2) and a balanced pair of lines (pin 4 and 5) carrying data at +5V. On the devices you’d encounter DIN sockets with one or more of the three MIDI interface types: In, Out and Thru. 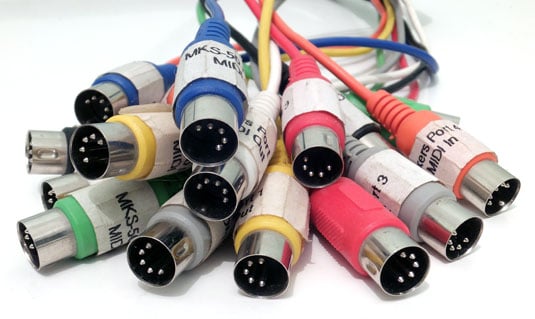 A dumb MIDI controller rarely had a MIDI In as there would be no point, there was no sound module within it to play. That said, Yamaha's KX88 did have one, but that was just to hook up an alternative controller – such as a KX5 strap-on keyboard – that could then communicate with the same gear as this master keyboard, handy for stage rigs.

For controllers, there’s only one MIDI interface that really matters and that’s MIDI Out, as this communicates all the note and performance data you are playing to the receiving MIDI gear.

So, quite simply, from MIDI Out you connect to the MIDI In of another device which would either be something with a sound module within it or a sequencer. The latter would, of course, relay this data to another MIDI sound source. 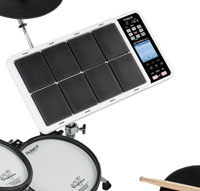 Part of the MIDI furniture: Roland's Octapad
Click for a larger image

A simple set-up would be MIDI drum pads – such as Roland’s enduring Octapad – that could be played with drumsticks connected to a drum machine to use those sounds. Unlike today’s Roland SPD-30, the original Pad-8 Octapad model didn’t have internal sounds.

MIDI Thru would not be found in isolation as it would appear either alongside In and Out on a decent keyboard or tone module, or just together with MIDI In on a unit such as a MIDI-controlled effects device. MIDI Thru simply enables the incoming data on the MIDI In port to be relayed unfettered to other MIDI gear, thus facilitating the daisychaining of multiple devices.

As a musician, you’d ideally want to see all three types on most gear for several reasons. A synth module with both MIDI In and Out suggests that it can perform data dumps. Referred to as System Exclusive (SysEx) data – ie, MIDI data that can be understood only by the particular make and model of MIDI device that created it – in its most basic form it would allow archiving of the different sound patch settings within the device. So if you’d spent a month working on dreamy synth pads or punchy piano sounds, you could save the lot with a SysEx dump.

Now this would be easy to do with a computer sequencer recording this information, but early MIDI gear sometimes featured back-up to a solid state cartridge or compact cassette. Cartridge slots were quite common although rather pricey with both ROM and RAM versions (later replaced by floppy drives) sold to offer users more sounds. I remember the pages of Keyboard magazine would be stuffed full of ads for synth cartridges for musicians and producers who preferred to spend time playing their instruments rather than programming them. 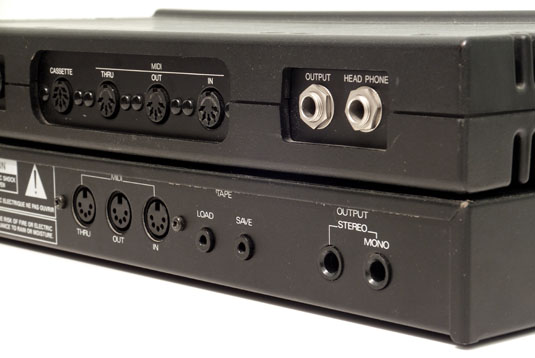 Tape backups were the cheaper option though and would also be available for drum patterns (the TR-909 supported this feature) and hardware sequencers such as Ensoniq’s ESQ-1. Having these sequence backups was a boon given the memory constraints of early MIDI gear. That said, saving and loading could take a while and you could never be sure of the reliability of a cassette tape backup.

System Exclusive data could contain anything from drum patterns and music sequences to sound data, which on the whole, is just a range of parameter data settings. So for synths this would be along the lines of LFO frequency and waveform choices along with envelope parameters and a whole lot more.

And the word was MIDI

MIDI data is delivered in 10-bit bytes – topped and tailed with a start and stop bit, respectively. The remaining eight bits are used to convey the information using a status byte (for instance Note On, channel 11) and two data bytes such as Note Value 44 (G#3) and Velocity 64. Unlike the Data bytes, the Status byte is split into two nibbles to accommodate two distinct messages. So the first nibble could flag up that it’s Note or Aftertouch data and the second nibble will identify the MIDI channel.

MIDI data: nibbles and bytes in a Note On message

Typically three bytes make up the MIDI word but some Control change message functions only have two. One byte would take 320µs to be transmitted, so three would accrue close to a 1ms delay, not enough to notice. Yet cumulatively, latency could become a problem with heavy data loads across multiple MIDI channels. Also, some MIDI gear could be slow to respond – introducing their own delays of a few milliseconds.

An opto-isolator is featured within the MIDI interface, as a means to avoid ground loops, and a UART (Universal Asynchronous Receiver/Transmitter) handles the communication. The interfacing is uni-directional; you need separate cables for MIDI In and MIDI Out and these should not be longer the 15m. The MMA outlines the hardware specification with a circuit diagram here.