While most MIDI synths would allow tweaking from the front panel, the trend had been to reduce the use of knobs from the analogue days with buttons and the occasional data entry slider being the prevalent modus operandi. With MIDI synths having digital control, a knob effectively required an expensive A/D converter and was to be avoided in favour of countless clicks.

There was another way though, which was to use Editor/Librarian software. These applications knew where and how to tickle your synths’ SysEx settings and, in doing so, could deliver on-screen editing of the parameters you’d been squinting at on a two-line LCD screen. To make it work, you’d connect up both MIDI In and Out to the computer to enable handshaking of the parameter tweaks from software to device and vice-versa.

So if you saw MIDI Out on a synth, you not only had a pretty good chance of backing up sounds with a data dump over MIDI, it was also likely you’d get to tweak it on-screen too, making new sound creation a less tedious affair. In part two we’ll look more closely at software applications, but for now, let’s stick with the early days out-of-the-box MIDI experience.

The all-important MIDI note messages, besides having pitch values spanning over 10 octaves – a maximum of 128 notes – can each have loudness values when played, a function described as Velocity, with a range from 0~127. One of the cost saving efforts of cheaper MIDI keyboards was to have a fixed sensitivity for Note data. So no matter how hard you strike the keys, it still sounds at the same level. Those keyboards with no Velocity sensitivity will have a value fixed middle value of 64 and these keyboards still exist on some budget and low end portable gear. So watch out for that in the spec, especially if you’re wondering why that portable USB MIDI keyboard looks like a bargain.

For dynamic expression, you need a keyboard that is Velocity sensitive. When played, each note generated will have its own velocity value which synths can be programmed to respond to, with different filter and envelope settings active for certain velocity level thresholds. For instance, rather a slow attack envelope and muted low pass filtering for a soft touch that generates low velocity values, opening up to brighter sound with a faster attack at higher velocity levels when playing more energetically.

So individual note messages not only describe the pitch but also how hard the note was played. Lest we forget that for every Note On message, there should be a corresponding Note Off message. This determines the duration of the played notes and if Note Off messages aren’t detected (perhaps the MIDI cable is unplugged), then you’ll get stuck notes – droning. To be on the safe side, Active Sensing was introduced to monitor hanging notes and to issue an All Notes Off message when detected. 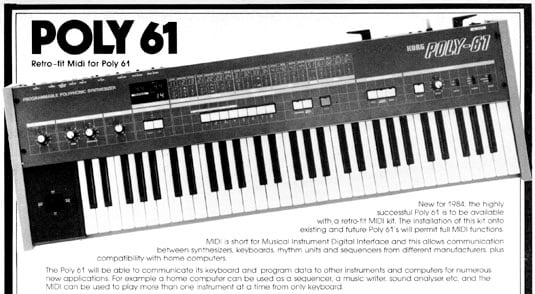 Afterthought, but no Aftertouch: the Korg Poly 61 was offered with a MIDI retrofit
Click for a larger image

Aftertouch is another feature that can change the response of a sound following striking the note. Sometimes referred to as "pressure", you’d just keep your fingers on the keys and press harder. Aftertouch messages are generated to produce effects such as vibrato or slight envelope changes – it can be assigned to numerous parameters.

Incidentally, two types of Aftertouch exist: Key or Polyphonic Pressure (individual depressed keys make changes) and Channel Pressure (the whole output channel responds to changes). As to which type is transmitted or recognised, it depends on the MIDI gear. Many early sound modules didn’t support Aftertouch at all and cheaper keyboards, then and now, certainly wouldn’t have it implemented.

Being a somewhat esoteric form of expression control, more often than not, Aftertouch data was either disabled from the MIDI controller or filtered out as a matter of course within a sequencer, especially if drum programming from a keyboard, as the drum sounds wouldn’t normally respond to these messages. With early sequencers being pushed for memory, you’d be looking for ways to keep things clean and it’s still good practice today.

Another issue was that daisy-chained MIDI gear operating over numerous channels might suffer log jams or timing problems with overzealous use of Aftertouch. Noticing it on a MIDI Implementation Chart can often be viewed more as a warning than as an enhancement.

In this respect, it’s important to keep in mind that, although the MIDI protocol offers a wide variety of message types, not all MIDI gear can respond to them and this is what the MIDI Implementation Chart will reveal.

For instance, MIDI’s Pitch Bend function seems fairly self-explanatory, but you’d probably find that it is not supported on a drum machine and that, depending on the synth, the range may well vary. An octave or two is the norm although you can limit the range to just a few semitones from performance parameters, if preferred.

Now there is one way of finding out what your MIDI gear can do without having to make a guess based on the ports on the back panel. Every device comes with a MIDI Implementation Chart which flags up its capabilities. On this you’ll also see various MIDI modes and MIDI message information – what’s supported, what isn’t.

While it can look a bit daunting at first, it’s extremely useful to get familiar with it, as it’s a shortcut to finding out what you can do with it. On more sophisticated equipment you might get this as a separate booklet that contained the full SysEx spec too, which could be handy if you were planning on digging deep.

A glance at the three charts above reveals the capabilities of these three different types of MIDI gear. All three receive MIDI notes but only the Yamaha DX7s synth and Roland TR-909 drum machine can transmit them. The Lexicon LXP-1 effects processor can respond to notes to manipulate effects, and likewise responds to Aftertouch, Pitch Bend and Program changes. The Roland ignores these last three commands.

The Yamaha DX7s accommodates Aftertouch send and receive. However, this synth doesn't recognise any clocking information that the TR-909 drum machine can send and receive. The LXP-1 effects unit will respond to clock information as a way of calculating echo effect timing to match the tempo of a sequence or drum pattern – you'll find more on this in Part Two. The only message type the LXP-1 effects unit can transmit is SysEx data (exclusive to the device itself).