SysEx aside, what has been described so far are Channel messages. With 16 channels available over a single MIDI cable you could daisy-chain multiple MIDI devices with each set to a different channel. Then from the master keyboard, you could change the transmitting channel to talk to a specific device. With a sequencer, you could have multiple tracks playing on different channels to get the whole rig going at the same time.

To make this possible, MIDI has different four channel modes to make those channel assignments stick and to prevent everything playing at once, unless desired.

Mode 1, Omni On Poly would mean a MIDI device would respond to polyphonic playing (chords, etc) on any channel, with Mode 3 Omni Off Poly enabling the same but on just one specific channel. By contrast, Mode 2 Omni On Mono receives on all MIDI channels yet plays just a single voice, which isn’t that useful really. With Mode 4, Omni Off Mono playing will be monophonic (one note at a time) on one specific channel when used Yamaha stylee. These days, however, specific controller messages allow this mode to be recognised as a multitimbral mode, scrapping the monophonic aspect and providing access to different voices on different channels.

A primitive example of this multivoice approach was Casio's early cheap-and-cheerful MIDI synth, the CZ-101/1000, which could be set to Solo mode and have four different voices playing monophonically – which was a neat way of creating a brass ensemble or fattening up basslines with multiple patches.

This early multitimbral mode was what Smith had introduced with the Sequential Six-Trak. The emergence of multitimbral synths (see below) has seen this mode effectively devoted to polyphonic playing of different voices on specific MIDI channels. According to Smith, the Yamaha version of Omni Off Mono mode was really only added to accommodate the 250,000 DX7 synthesisers that had been sold. 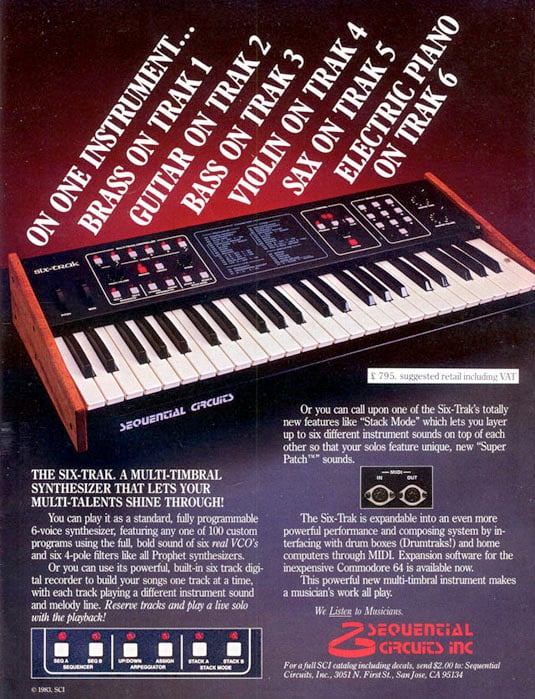 When you actually do it, connecting MIDI instruments is a lot simpler than it sounds. Just getting these ground rules established highlights the meticulous detail MIDI’s creators had to grapple with as they envisaged how these devices would interact and the performance characteristics that would need to be realised.

Before we get onto Control Change messages, there’s another neat trick that MIDI delivers to make even small systems more flexible: Program Changes. In short, this is changing your synth sounds by remote control. A master keyboard would typically have some kind of data entry on it, so you could tap in 22 and the rack synth you’re hooked up to would leap to patch 22.

Now if you add Program Change messages on a sequencer at specific points in the song, you can get sounds on synths to change automatically during the course of playback, so you’re not stuck with the same sound and could switch from say, electric piano in the verse to strings in the chorus.

The trick with Program Changes was to initiate them fractionally ahead of the oncoming verse or chorus to avoid glitching, so that the swapover didn’t happen on the beat, when there would most likely be a heavy throughput of data.

The arrival of multitimbral synth modules (the type that can simultaneously replay a number of different synth sounds accessible over different MIDI channels) made the need to get more from less with Program Changes fairly redundant.

However, these messages were still useful for configuring setups, especially when loading up different songs. Also, with the arrival of General MIDI in 1991, Program Changes were used to help standardise a palette of instruments. This meant that tapping in patch 22 would always bring up a Harmonica sound, unless you were on Channel 10, which on GM synths was reserved for drums.

Control Change messages are where the real fun starts, allowing a certain level of finesse in MIDI performance and mixing. It’s here where you’ll find a raft of different applications for functions such as Modulation wheel and Foot Controller – typically assigned as a sustain pedal, which no self-respecting keyboard player would be without.

Useful mixing functions are available too, such as Volume, Pan and Effects controls. With 128 slots to fill, there’s still plenty of scope for expansion although General MIDI made a substantial landgrab here. General Purpose Controllers are available for the user to assign to any available function, and are frequently applied to parameters that Aftertouch would access.

While some control changes, such as Foot Pedal, are merely on/off states, having only 128 values on slider controls could hamper smooth transitions for some functions. A way around this was to use two controllers in tandem – a pairing of coarse (MSB) and fine (LSB) controls that in combination deliver a 14-bit resolution, a range from 0 to 16,384. However, not all devices would be capable of utilising this resolution, so if the was the case when receiving Breath controller data (control number 2 MSB) and (control number 34 LSB), then only the coarse MSB value would be recognised.

The dawn of desktop music-making

The MIDI specification has a whole raft of features dedicated to synchronisation for sequencers and desktop music-making. At the time, digital recording was in its infancy – limited to sampling maybe a second or two.

And whereas today we take for granted the background processing that allows tempo changes to be made on audio files without altering the pitch, this wasn’t the case in the early 1980s. Utilising tempo changes when MIDI sequencing was not only useful for expression and experimentation, it also enabled tricky parts to be played in at slower speeds, as required, only to be speeded up again when completed.

Many people were tempted to move from simply playing different MIDI modules using a controller to using a sequencer – and with good reason. One other major advantage MIDI sequencing had over multitrack tape recording was that you didn’t need to rewind to get to the beginning of the song. You could start a sequence from anywhere and cycle (loop) around phrases too. This wasn’t just a useful tool; as a creative experience, it was nothing short of amazing. ®

Coming up in Part Two: The practical applications of the hardware and software that was developed to take advantage of these features; different instrument controllers; how MIDI continues to evolve; and finding unique applications that have nothing to do with music (as well as plenty that do). ®