Samsung's cooking 3D NAND flash chips. WHAT did you say the specs were?

Samsung has launched its first 3D V-NAND SSD but hasn't yet released any real performance data, bringing its new product's status into question.

3D V-NAND, announced on 7 August, stacks layers of NAND vertically to increase the capacity available in a set footprint. It is a way of getting over the progressively shorter working life and slower performance as NAND lithography reduces from 29-20nm-class cells (2X) to 1X (19nm-10nm) and even beyond that of existing 2D or planar NAND cells.

A canned statement from ES Jung, exec veep at Samsung Electronics' semiconductor R&D centre, said: "By applying our 3D V-NAND - which has overcome the formidable hurdle of scaling beyond the 10-nanometer (nm) class, Samsung is providing its global customers with high density and exceptional reliability, as well as an over 20 per cent performance increase and an over 40 per cent improvement in power consumption."

The 2.5” form factor V-NAND product comes in 480GB and 960GB versions, with the latter having a "more than 20 per cent increase in sequential and random write speeds" and a 35,000 program/erase cycle capacity. It uses 64 dies of MLC flash, each offering 128Gbits of capacity, and has a 6Gbit/s SATA controller. The 3D cell array has 24 layers.

Samsung has not revealed the IOPS or bandwidth numbers for the new chip. We asked if it could tell us how its 960GB SM843T SSD compares in performance and endurance to a 960GB V-NAND SSD.

The SM843T uses 24nm Toggle-mode MLC NAND, and we have the following performance and endurance numbers on file:

A Samsung V-NAND video says V-NAND has twice the write speed of previous 20nm-class MLC flash and 10 times the endurance. Also V-NAND has half the power-consumption.

Does this mean V-NAND performance is twice that of the SM843T; that sequential writes are 740MB/sec; or does it manage 30,000 4k random write IOPS? Also that its endurance is 110 full drive writes a day and 34PB written over its life time? 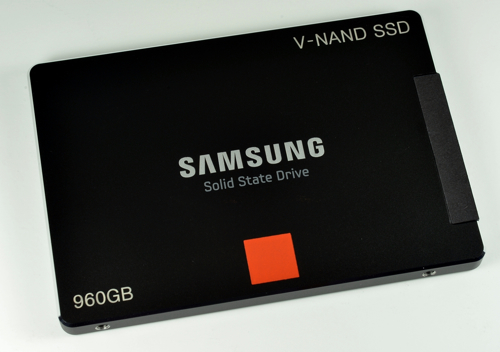 "Regarding direct comparison of 3D V-Nand based SSD, I need to check more details with Samsung Korea and as soon as its spec is worked out, I’ll let you know."

Jim Handy of Objective Analysis said: "The benefit of V-NAND over standard NAND comes from its use of a charge trap instead of a floating gate. Spansion – the only company to ever successfully mass produce charge trap flash – makes similar claims about the write speed, energy use, and endurance of their products, although all they ship today is NOR flash."

"I will be watching Samsung carefully. Although they imply that they are about to ramp V-NAND very soon, I fully expect for them to encounter some very important stumbling blocks. This is an extremely different technology using many processes that have never been put into production before, and others with which Samsung has no production experience."

On Samsung's website there is no data sheet for the 3D V-NAND SSD and no part number. There is no availability or pricing information available either. Good luck ordering it. ®