SPB In 2011, The Reg's Special Projects Bureau followed the World Solar Challenge through the dead heart of Australia.

This year, we'll do it again. 2013's World Solar Challenge hits the road on October 6th and The Register's Vulture South team will hit the road too, tracking the racers from the top end through the never-never and beyond.

We're hatching our plans and so are the team, which are keenly showing off their designs before their babies get packed into crates and shipped to Australia for the 3,000 kilometre desert epic.

Since the organisers of the challenge tell us that there are 48 teams entered for the Darwin to Adelaide sun-powered drive, there probably won't be time to cover everybody, but The Register will do our best to make use of the time between now and the race start on October 6.

While the field will still sport a large number of drivers shoehorned into aerodynamic tabletops, other builders have their eye on the new “cruiser” class that tries to replicate the family sedan experience. That's the class that the University of New South Wales (UNSW eVe) is targeting.

With more than $AU20,000 support via a Pozible campaign, eVe is a step along an ultimate goal of building a solar vehicle that would pass street registration in Australia. Even so, the two-seater still bears the marks of the need for efficiency: as well as being more aerodynamic than most sedans (which are generally bricks with engines), it's got the extremely skinny wheels needed to minimise road drag.

One rival of the UNSW team is Solar Team Eindhoven, which is also contesting the cruiser class with what it says is the “world's first solar family car”. Its four-seater, dubbed Stella, is designed to have a battery range of 600 km, and the team claims its panels generate enough electricity to make the vehicle energy-positive, able to return power to the grid.

Stella's design goal – apart from winning the cruiser class in the challenge – is to be able to take a family from The Netherlands to France in one day. As well as having four seats, the team has included a trunk in the design.

Stanford's Luminos, which will have its official unveiling on Friday July 12, is also a four-wheeler, and is US street-legal, but the single-seater won't be in the cruiser class. Its makers claim the vehicle produces less drag than a cyclist. 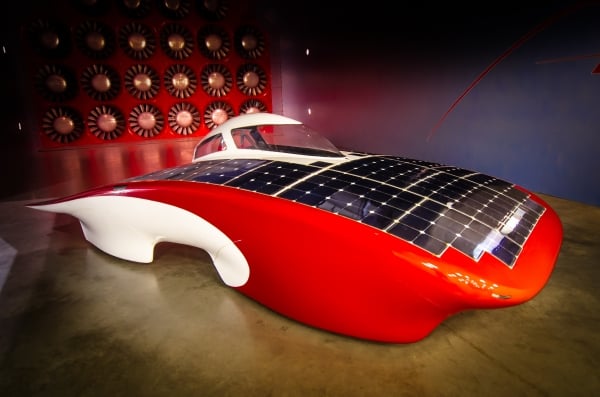 The $US1.4 million four-wheeler, at 170 kg (375 pounds), is carrying a fair amount of weight, but the Stanford team hopes their high-efficiency (97 percent) electric motors will make up for some of that heft.

Cambridge University's Resolution is a lightweight teardrop that will accommodate any driver at all, so long as they're no taller than 5'3” (160 cm).

There is, however, one non-traditional approach the Cambridge team is following: movable solar panels. Instead of covering the whole car with panels – which means when the sun is low to the horizon, a significant number of panels are in shadow – the 120 kg Resolution has mounted its panels on a tracking plate.

Cambridge reckons its follow-the-sun panels will yield 20 percent more power than if it used static panels.

With any luck, the 2013 Solar Challenge won't suffer the dramas - bushfires, vehicle fires and cloudy weather - that left only seven contestants able to finish the 2011 race. ®

ROTM The man who gave us our first Robotic Overlords

Roundup Including: Yes, that nightmare smart toilet that photographs you mid... er, process