Near misses and lucky escapes for a multi-billion-dollar baby

Anniversary Edgar – or Ted – Codd is one of the most influential figures in computing. Born 90 years today*, Codd – who passed away in 2003 – was the man who first conceived of the relational model for database management. 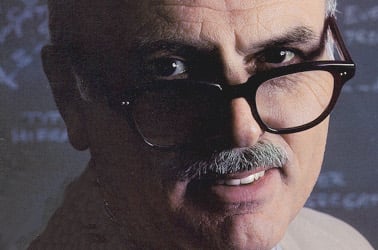 Relational databases are today ubiquitous – on your PC, in your smartphone, in your bank’s ATMs, inside airline reservation systems – so it’s easy to be blasé about his contribution, but Codd worked in a different world.

You needed to be a programming nerd or rocket scientist with a theoretical background to build even a functioning database.

Codd’s contribution was revolutionary: first, it separated the data from the computing and from the application, and second, it described a framework for storing and retrieving data using simple rows and tables.

It was a model everybody could buy into – and they did.

Codd’s idea was to databases as the GUI from Xerox Parc was to PCs; relational brought databases to the masses. Decades later, analyst IDC pegs the worth of the global relational database market at about $28bn – and it's growing at 7.6 per cent a year. Some of the biggest and most profitable names on the computing scene – Oracle, IBM and Microsoft – are currently working on relational database management systems.

It’s easy to view success through the present. This happens especially in technology, where fakers look down the lens of the past to pronounce the inevitable brilliance of somebody’s achievements today.

But there was nothing inevitable about relational. In fact, this is one technology that was born as it lives today – on the cusp of uncertainty.

It does seem fitting that somebody like Codd should have invented a process for simplifying databases. An Oxford-educated mathematician, Codd was no academic theoretician or government stuffed shirt of the type who were building many of the room-sized computers at the time.

Codd was an outsider. Born in Poole, Dorset, in 1923, Codd served in the Royal Air Force (Coastal Command) and moved to the United States after World War II. Once there, despite his obvious talents in numbers and flying, he worked as a sales clerk at US retailer Macy’s before going on to teach mathematics at the University of Tennessee – not exactly an Ivy League destination.

His career in computing didn’t begin until he was 26, in 1949, when Codd joined IBM as a programming mathematician. At Big Blue, He worked on the Selective Sequence Electronic Calculator and then IBM’s card-programmed electronic calculator.

Relational happened next, right? Wrong. Personally offended by US senator Joseph McCarthy’s Cold-War Communist-baiting, Codd abandoned IBM and the US entirely in 1953 and went to work across the border in Canada. He only rejoined IBM after running into an ex-colleague four years later.

Having transferred to IBM Research facility in San Jose, California, Codd was on track to work on databases. In 1970, Codd published the paper that changed history, A Relational Model of Data for Large Shared Data Banks (PDF). In a paper which famously opened: "Future users of large data banks must be protected from having to know how the data is organised in the machine", he proposed substituting the hierarchical or navigational structures used to build databases with tables of rows and columns.

It was simple and sensational. But IBM wouldn't bite.

At the time, databases fell in to two camps: IBM's IMS (Information Management System) used a hierarchical system of associating related types under a top-level identifier. So, if you were a bank, for example, this identifier might be a person’s name with all related data – address, children, other accounts, and address – hanging off, underneath. CODASYL was the second approach, and used a navigational database model which allowed you to define your database’s schema and its language.

The problems were clear: neither scaled. Data was hardwired into either a top-down or a language or schema silo chosen by the database builder.

There were no cross-industry standards for query, never mind for third-party tools, and data portability was near impossible unless both data stores shared the same database structure. In order to query data, you required routines written by humans to very specific functions.

If you were working with databases, you also needed to know different languages and structures and were pretty much married to the individual or company that had built your database.

Rows and tables were simple. They were agnostic about type and everybody understood the principle.

The final piece of the relational puzzle slotted into place a year or two later, when IBMers Donald Chamberlin and Raymond Boyce followed up with SEQUEL (Structured English Query Language), which later became SQL, giving physical form to the relational theory.

As far as IBM was concerned, however, relational was DOA. The mainframe giant was too heavily invested in IMS and wasn’t about to cannibalise the business. It wasn’t until a decade later, when IBM released SQL/DS and DB2 in 1981 and 1983, that Codd’s employer got into the relational game. By 1985, Codd had outlined his 12 rules for defining a fully relational database.