Pic Archaeologists have discovered that ancient Egyptians fashioned their bling from rocks from outer space, not from iron ore. 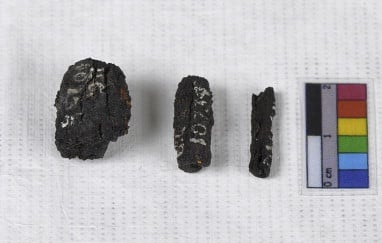 Just bead it, bead it ... Three of the nine ancient beads from Gerzeh, Egypt

We're told beads kept at UCL's Petrie Museum in London predate the emergence of iron smelting by two millennia: the jewellery was made from pieces of meteorite, hammered into thin sheets and then rolled into tubes. The nine beads, which are at least 5,000 years old, were then strung together into a necklace along with gold and gemstones, reflecting the high value of the material in ancient times.

"The shape of the beads was obtained by smithing and rolling, most likely involving multiple cycles of hammering, and not by the traditional stone-working techniques such as carving or drilling which were used for the other beads found in the same tomb," said Professor Thilo Rehren, lead author of a paper on the find.

"This is very different technology from the usual stone bead drilling, and shows quite an advanced understanding of how the metal smiths worked this rather difficult material."

Because they started metal working with meteorite iron, smiths had nearly two millennia of experience by the time iron smelting started in the mid-second millennium BC, we're told. That knowledge was essential for coming up with smelting in the first place and the production of iron from iron ore, allowing the Iron Age to start and the metal to replace copper and bronze.

The beads were found in a pre-dynastic cemetery near the village of el-Gerzeh in Lower Egypt around 1911 and were completely corroded when discovered. A team of boffins had to use X-ray techniques to figure out if they were meteoric or magnetite, which can be mistaken for corroded iron due to its similar properties.

Shooting beams of neutrons and gamma-rays at the beads showed their unique texture and also revealed the high concentration of nickel, cobalt, phosphorus and germanium characteristic of meteoric iron.

The full paper, 5,000-years-old Egyptian iron beads made from hammered meteoritic iron, was published in the Journal of Archaeological Science and is available online from today. ®