Is your 27-incher's display distorted? White? Blue? Black? Your fix is free 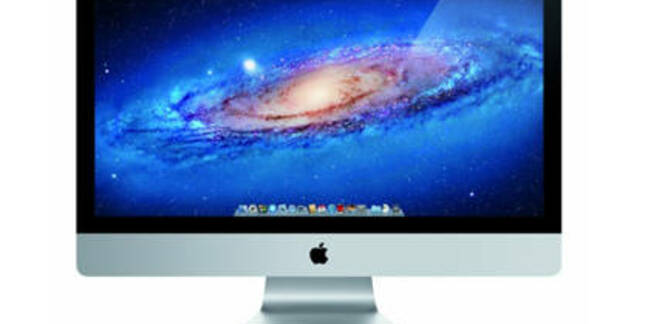 Apple has admitted to world+dog that some of the 27-inch iMacs that it sold between May 2011 and October 2012 have a suspect graphics card, and that if you own one of the affected models, it'll replace the possibly wonky card for free.

The 27-inch iMacs sold during that period were equipped with either an AMD Radeon HD 6770M or Radeon HD 6970M, but it's only the latter card that's problematic, possibly "causing the computer's display to appear distorted, white or blue with vertical lines, or to turn black," according to Apple.

By the way, this is not the first time that Apple has had trouble with the displays of its 27-inch iMac. In 2010, the big boy was known to suffer from flickering and a yellow tint.

If you happen to be unlucky enough to own an iMac that may have one of the troublesome Radeon HD 6970M cards, Apple suggests three different ways you can have it "evaluated": you can make an appointment at an Apple retail store's Genius Bar, track down an Apple Authorized Service Provider, or get in touch with Apple Technical Support for info on local service providers.

If you've already replaced a malfunctioning Radeon HD 6970M in your big ol' Apple all-in-one, contact Apple to request a refund. And if you're the procrastinating type, know that Apple has granted you three years from date of sale to get around to having your 27-inch iMac checked out.

If you do decide to haul your iMac down to the local Genius Bar or service provider, it may be a good idea to ask a friend for help: at 30.5 pounds and 20.4-by-25.6-by-8.15 inches, a 27-inch iMac is not something you may want to carry very far by yourself, should you be among the daintier of fanbois. Or fangrlz. ®