Astronomers using the immense and astonishingly perceptive Atacama Large Millimeter/submillimeter Array (ALMA) have captured a stunning image of the miracle of birth – starbirth, that is. 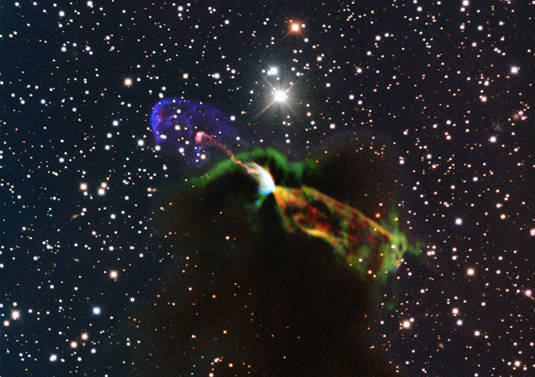 Starbirth – a violent affair – results in the stellar babe ejecting materials at exceptionally high velocities of as much as one million kilometers per hour. In the case of the object viewed by Héctor Arce of Yale University and his international team, the birth is taking place about 1,400 light years away in the southern constellation of Vela.

When the ejecta smash into the starbirth's surrounding gas, it glows, creating what's known as a Herbig-Haro object. Arce's study of this particular object, HH 46/44, revealed two jets of materials, one aimed at Earth and another aimed away.

The team's observations were carried out by ALMA from December 28, 2011 to January 25, 2012, while the telescope was still under construction (it went fully online in March of this year), but the intensive data analysis and imaging was not completed until recently. The image of HH 46/44 was published along with a press release from the European Southern Observatory (ESO) on Tuesday, and the findings are described in a paper to be published in the Astrophysical Journal snappingly entitled "ALMA Observations of the HH 46/47 Molecular Outflow". 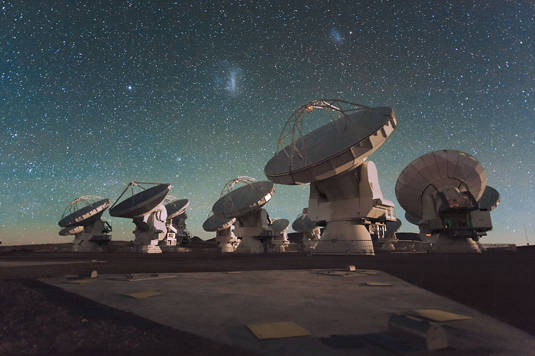 ALMA by night, under the Magellanic Clouds (click to enlarge)

The 66 radio telescopes that comprise ALMA are located at the Llano de Chajnantor Observatory in the Chilean Andes, perched at 16,500 feet in the ridiculously arid Atacama Desert. How arid is ridiculously arid? Well, there are some stretches of the desert where not even a single drop of rain has ever been recorded. This aridity is key not only to precise visible-light observations, since water vapor distorts imaging, but also to ALMA's submillimeter operation, seeing as how water vapor absorbs and attenuates such radiation.

ALMA produced its first images – of the collision of two galaxies – in October 2011. Now that it is fully operational, expect to be gifted with more images as mind-boggling as the one above – as well as some ground-breaking science, of course – in years to come. ®