Pushing into Global 2000 accounts – with a vengeance

There are few things in the world more difficult than starting up a new systems business. Cisco did it four years ago, and now it looks Nutanix might make it out of the starting gate, as well.

The company is beginning to get traction in very large enterprises and taking down big deals, and it continues to add new features to the distributed SAN that is has created at the heart of its eponymous virtual server appliances, which are clustered together to scale up compute, memory, and storage capacity.

IT shops are in pain, says Howard Ting, vice president of marketing at the company, and they want a better answer when it comes to managing pools of compute and storage than using a mix of different operating-system and disk-array features. They also, as it turns out, want the functionality of a storage area network without having to pay for a SAN.

The key bit of software in the Nutanix Operating System (which is not really an operating system, despite its name) is something called the Nutanix Distributed File System. This used to be called the Scale-Out Converged Storage virtual disk controller, or SOCS for short, when Nutanix launched in late 2011, just in case you are confused.

NDFS is a bit of homegrown software that runs on a few of the cores on each node in a Nutanix cluster, and it takes the capacity of Fusion-IO PCI flash cards (only available in some of the models), of Intel SATA SSDs, and of Seagate disk drives and creates a virtual storage pool that all of the virtual machines running atop a server hypervisor in the cluster can access.

Basically, it turns server nodes into a virtual SAN so companies don't need to buy a real one, and it supports both block and file I/O access to data on that virtual SAN. This distributed file system runs on all of the various appliances that Nutanix sells, which come in various storage and compute capacities.

Back in June, Nutanix added the NX-1050 entry appliance and the NX-6000 high-end appliance to chase SMB and large enterprise customers, respectively, and fleshing out the line which had the existing NX-2000 and NX-3000 machines.

With the Nutanix OS 3.5 update launched on Tuesday, this key software is getting updated with a new management interface and also de-duplication features that can radically cut down on the amount of storage needed for virtual machines, and also boost the performance of those virtual machines.

The new management interface is called Prism, and it consists of a user interface coded in HTML5 so it can be used on any and all devices out there in the hands and on the desktops of administrators. 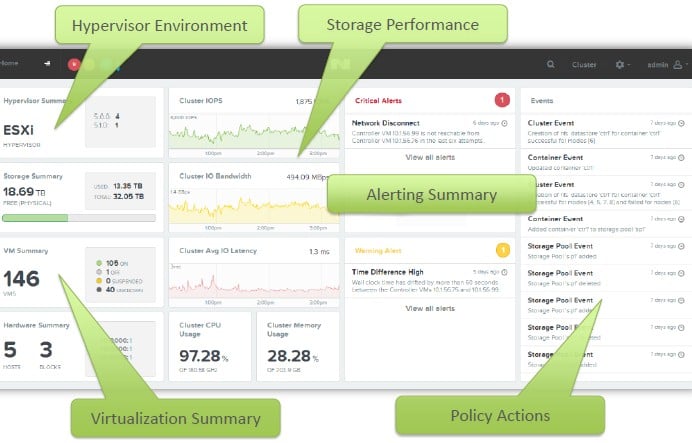 The Prism interface is "consumer-grade," says Ting, and this should be an insult to the ears of many IT shops, but in 2013, when consumer appliances and software are often better than the commercial-grade stuff, it isn't.

With the Prism management tool, Nutanix is also for the first time opening up its system, storage, networking, and virtualization APIs so that other management tools (OpenStack is the initial biggie, but so are legacy management frameworks used by large enterprises) can hook into the Nutanix appliances and babysit them.

The de-duplication function that is now part of Nutanix OS 3.5 is called the Elastic Deduplication Engine, and it is a bit of homegrown code that will eventually be able to remove duplicate chunks of data from main memory, flash, and disk. At the moment, explains Ting, it can remove copies of data stores in memory and flash, and a subsequent release due before the end of the calendar year will extend this de-duplication function down to disk drives in the system.

The addition of a de-duping function to NDFS is meant to drive up the VM density on the NX appliances, and as a side effect, it also drives up performance on the VMs.

Here's how it works. On any collection of VMs running on a particular appliance node, there is a lot of duplicated code. For instance, they might all be running Windows. If you have those Windows instances share a chunk of data stored in main memory or flash memory in the server, that means you can get more data diversity into that main memory and flash, and hence, a larger per cent of the workload is running in memory or flash and therefore can be moved into the processor quicker, thus boosting performance.

Obviously, the more similar the workloads on the VMs, the more of an effect the de-duplication will have on increasing the number of VMs an appliance can hold and on boosting their oomph.

Ting says that the amount of hot data stored in main memory and flash can be increased by as much as a factor of ten, and the goal with the extension of this de-duplication when it is spread across those Seagate disks later this year will be to get a similar decrease in used capacity and therefore increase the effective capacity of disk storage.

Incidentally, this de-duplication function in Nutanix OS 3.5 is in addition to and works in conjunction with the Snappy data-compression feature that already cut down capacity requirements with the 3.0 release of Nutanix OS in December 2012. Snappy, which is sometimes called Zippy, was developed by Google for its MapReduce and BigTable systems.

With the 3.5 release, Nutanix is also previewing support for Microsoft's Hyper-V 3.0 server virtualization hypervisor atop its appliances. Earlier Hyper-V releases are not being supported, says Ting, and given how much better the Hyper-V associated with Windows Server 2012 is compared to its predecessors, that is no surprise. Full support for Hyper-V will be available in a matter of months.

Nutanix already supports VMware's ESXi 5.0 and 5.1 hypervisors, as well as Red Hat's Enterprise Virtualization 3.0 and 3.1 variants of the KVM hypervisor. Ting says that the company will be able to support the next release of ESXi, which VMware is widely expected to launch at VMworld next week, shortly after it comes to market.

Customers who have Nutanix appliances and who have paid for support contracts will get the Nutanix OS updates for free.

Chasing large accounts – and catching them

Nutanix has just finished its seventh quarter of peddling its NX series of server-storage appliances, and in the fiscal fourth quarter just ended in July, business was booming, Ting told The Reg. He was not at liberty to provide a precise figure, but said that the company was on track to double revenues in the current fiscal 2014 year ending next July.

Back in June, Nutanix said that it had exited its third fiscal quarter ended in April at a $80m annualized run rate and had sold some 3,000 of its appliances to several hundred customers. In the fourth quarter, says Ting, the company pushed nearly 1,500 machines, and sales were 40 per cent above an already aggressive sales plan. The launching of smaller and larger appliances during the quarter no doubt helped.

"We are having a hockey stick moment," says Ting. And again, the question is when one of the tier-one server makers will make Nutanix an offer it cannot refuse.

Perhaps more importantly, large enterprises are starting to place orders for the NX appliances. (He did not give a customer count.) Ting says that up until now, the company had a few dozen very large enterprises (Global 2000 class), but that this part of the business is growing fast. About 65 per cent of the company's business is coming from companies with 1,000 or more employees, and 20 per cent of these are coming from organizations with over 10,000 employees.

"These companies are more risk-averse, and they have longer purchasing cycles," he explains. "There is also more intense competitive pressure from EMC, NetApp, and others selling converged systems. They are not giving up their deals without a fight and deep discounting."

In one case, Nutanix had a line on some business at a US-based, publicly traded big pharma company, and EMC wanted to push its own VSPEX reference architectures built on Cisco UCS modular servers and EMC storage. At one point, EMC chairman Joe Tucci was flown in to try to save the seven-figure deal, but Nutanix prevailed, according to Ting. ®