Donatelli gets a 'special assignment' to find new tech 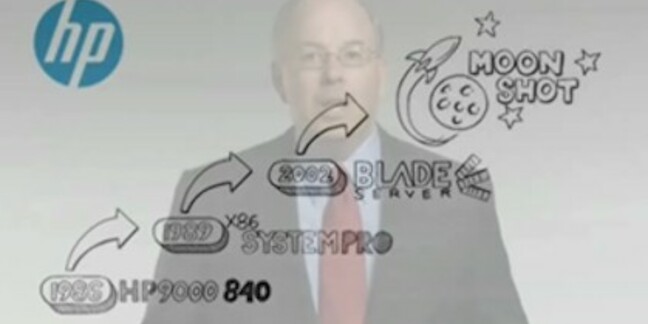 Hewlett-Packard has had IBM envy for years now, and CEO Meg Whitman is following in the footsteps of Big Blue once again by putting a seasoned software executive in charge of hardware.

Concurrent with the announcement of its financial results for the third quarter of its fiscal 2013, HP announced that Dave Donatelli, who came to HP in 2009 from EMC to run its storage business and was elevated through several reorganizations to be put in charge of the entire Enterprise Group by Whitman, would be given another role at the company.

The Enterprise Group combines servers, storage, software, and networking into a single behemoth that represents about a quarter of the company's revenues and that is supposed to be a profit engine like printer ink. That was the idea when HP bought Compaq more than a decade ago, anyway.

Donatelli will be replaced by Bill Veghte, who was brought into HP in May 2010 from Microsoft to run its software business, was tapped by Whitman a little more than a year ago to be the company's chief operating officer and to run its cross-divisional cloud computing initiatives. Veghte was also previously chief strategy officer at HP.

The irony, of course, is that Veghte was at Microsoft for two decades and rose through the ranks to eventually be put in charge of the Windows business. Microsoft promised Veghte a "leadership role" at the company after a reorganization, which never materialized and hence he left.

It could be that Donatelli stays at HP, or that he looks for a CEO position at another IT company. HP said in a statement that Donatelli would stay on at HP to "focus on identifying early-stage companies with new technologies, similar to HP Moonshot and HP StoreOnce, which he brought to market" and to help find acquisitions, such as 3PAR in storage and 3Com in networking.

Donatelli will be trolling the venture capital firms for possible acquisitions, and will continue to report to Whitman in his new role, which does not yet have a title. All that Whitman said on the call with Wall Street analysts to go over the financials for fiscal Q3 was that Donatelli would be on a "special assignment."

HP said it has no plans to name a COO in the wake of the changes.

"Bill's vision for the future of IT, his breadth of experience in the industry and at HP, and his deep enterprise experience, make him the ideal candidate to help HP navigate a rapidly changing market," Whitman said in a statement.

HP's server and storage businesses have been struggling under intense competition in recent quarters, so an executive change is not at all surprising. Dell has been kicking HP pretty hard in servers, and EMC has been doing the same with storage arrays – at the same time that the HP-UX server business, once large and profitable, has been decimated by a shift away from Unix boxes in general and those based on Itanium processors in particular.

The company also elevated long-time Friend of Meg, Henry Gomez, who among other things managed public relations for Whitman's failed run for the governorship of California, to the position of chief marketing officer.

Gomez was tapped to run public relations for HP back in January 2012, and now marketing and communications for HP are consolidated under Gomez. Marty Homlish, who was CMO, has been given the role of chief customer experience officer. Both report to Whitman directly. ®