Harrison’s notion was to build a system into which Z80-based boards could be used in place of PLCs, but the outcome for Shelton Instruments was a new multi-user microcomputer. Taking the PLC bus, putting it into a chassis and equipping it with processor, memory and IO modules, Shelton created what became known as the Shelton Sig/Net, a business-oriented machine running an OS compatible with Digital Research’s CP/M 2.2, back then the de facto standard for business micros. It was released in 1981.

The Sig/Net comprised a 4MHz Z80A with 64KB of RAM and one or more RS232 ports and two floppy drives. The processor and memory, disk controller, and IO were each implemented on separate boards slotted into the compact chassis. The clever part was the ribbon cable-connected bus which linked the on-board modules and also allowed this single-user unit to be hooked up to a ‘hub’ box containing a floppy drive, a hard disk of formatted capacities of 5.25MB to 21MB, and another 4MHz Z80A, again with 64KB of RAM. Connected to the hub, the standalone machines now became “satellite” units able to host screens and keyboards for up to three users, all of who could access the shared hard drive. Had more users than that? Then just hook up as many satellite units as you needed.

“It was not that one processor ran a number of dumb terminals - because multi-user systems were all terminal-based back then,” says Shelton, “it was that each user had their own computer in a box connected by our own proprietary, parallel bus to the other boxes. What started out as the solution to an industrial problem, we though we might offer as a commercial box.” 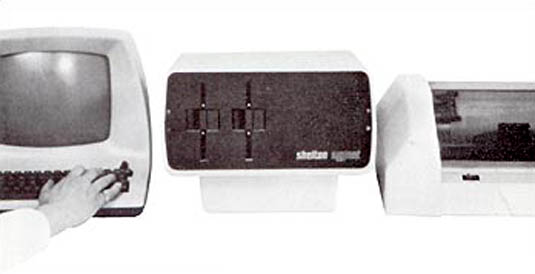 The bus cable had a maximum reach of less than a metre, so satellites had to stay in the same room as the hub. But, as Personal Computer World reviewer Terry Lang, writing in the magazine’s April 1983 issue, noted: screens and keyboards connected to the satellite by RS232 serial links, “and can thus be located wherever required (using line drivers or modems for the longer distances)”.

Users got a directory on the hard drive and up to 16 sub-directories, each with its own drive letter in a kind of virtual floppy array, though each had no specific allocation size - space was taken up on the hard drive as required.

Making all this happen was McNOS (Micro Network Operating System), a CP/M-like multi-user OS bought in by Shelton from Avocet, a software developer in the States - “it was just a lad on the East Coast” - because CP/M itself had yet to demonstrate it was up to the task. Shelton Instruments tweaked the code to help programs that made use of internal CP/M routines to run on McNOS. The OS also came with a file-buffering system utilising RAM in the hub unit, and a basic file-lock system to prevent users from simultaneously writing data to the same file. It provided programs with a pool of locks. A command language interpreter, KCL (Kevin’s Command Language), formed the main user interface.

“The Shelton Sig/Net system is based on good hardware and provides good value for money,” opined Land. “The system provides a convenient cost-effective growth path for the user who wants to start small but expects to expand to a multi-user system later... Much of the system is of British manufacture or assembly, which should help price stability. It should be emphasised that in addition to the prices quoted you would require an additional terminal for each user.”

Shelton later upgraded the system with a 6MHz Z80B processor and better 512 x 512 graphics, releasing the new machine as the Sig/Net 10025. A Sig/Net 3B machine came next. Extra modules provided new graphics resolutions, analog-to-digital converters, industrial IO ports and such. In an advert in the same April issue of PCW, SI claimed to have more than a thousand Sig/Net users in the UK. According to Shelton, the system found a home running small office databases, co-ordinating sales teams’ efforts to make sure the same widgets weren’t sold twice, and hosting multiple accountancy ledgers - essentially anywhere where a small group of office workers needed to access and share the same data.

It was, he says, very successful. Shelton Instruments recast itself as a computer maker, leaving its instrumentation heritage and its industrial consultancy behind, and pulled in venture capital funding to build the business.

And then he made a classic blunder, Shelton admits with a chuckle, and invoked the Osborne Effect. Like Adam Osborne before him, Shelton announced the arrival of a superior model some months before it was due and while the company still had stacks of stock yet to sell, all of it punched out in SI’s Islington HQ. The announcement killed demand for the current version, leaving Shelton Instruments and its dealer partners with kit they could not shift. Without the sales of the old machines, SI couldn’t afford to build the new one. It certainly couldn’t afford to junk all the old machines. The impact was devastating, and it led to the collapse of Shelton Instruments.

The Sig/Net itself was acquired by then recently revamped peripherals manufacturer Data Dynamics of Hayes, Middlesex. References to it offering the Sig/Net 3B extend into the late 1980s, but there the trail ends. It’s hard to see the CP/M machine, innovative though it was, surviving long into the 16-bit IBM PC era. Even Shelton admits the machine should have used a 16-bit processor from the start, but CP/M was the standard OS, and it took too long to move to 16 bits. Indeed, the shift to 16-bit prompted by the IBM PC is, says Shelton, one of things that helped do for the Sig/Net just as it did all the other manufacturers of business-centric 8-bit CP/M machines. Shelton had a 16-bit machine in the pipeline, though he can’t now recall what OS it might have run: CP/M, an updated version of McNOS or even MS-DOS.

Not that he found himself at a loose end when Shelton Instruments crashed. Sir Clive Sinclair, an old friend of Shelton’s, had a notion in the mid-1980s to create a cheaper, more competitive and British IBM clone - presumably after the QL has proved itself a failure. Sir Clive was convinced there must be a cheaper way to make one than simply buying in the components from Intel. He’d known Shelton for years, ever since Chris, as a student, had badgered him about errors in his technical writing. So he had Shelton consider what that ‘cheaper than Intel’ approach might be. Shelton did some research and soon had a proposal: to use UK memory and processor company Inmos’ new Transputer CPU to emulate a 4.77MHz IBM PC XT, then the business PC standard, entirely in software.

Sir Clive and Shelton began to plan out a desktop computer with high-resolution monochrome graphics and integrated fax, scanner and copier hardware - a leaf, in some ways, taken from Amstrad’s book. Tying it all together was a Mac-like GUI. It could, the two men thought, become a new standard in office automation, delivering greater capabilities than the IBM PC yet still be able to run all the PC software businesses had acquired.

Next page: Sir Clive Sinclair and the PgC7000
Page: