Swat the Not Spot

Scottish broadband remains an elusive dream for many, despite the money being poured into BT's coffers, but pigeonhole a Reg reporter and you might just get lucky.

That's what Ronny did. He grabbed your correspondent at a ward meeting where reps from Community Broadband Scotland were polling householders for their opinions – to be held in reserve until 2016, when the community broadband kickstarter fund could do something about them – while presenters and audience alike blamed Margaret Thatcher and your humble correspondent told everyone to get off their arses and build a solution, which is what Ronny wanted to do.

I'd been invited to speak about how I brought broadband to my own home, a process which involved digging up a sheep field, braving carnivorous plants, falling out with several neighbours and, eventually, maintaining the 5Mb/sec connection I enjoy today.

The Ward Forum, a community talking shop, had invited Community Broadband Scotland along to explain that, come 2016, CBS would be able to support community-driven efforts with £5m in government cash. It can't do anything yet, the reps explained, as BT is still deciding how to spend the hundreds of millions of pounds it has been awarded by the Scottish government, and one wouldn't want to overlap.

This being Scotland, speakers were repeatedly interrupted by demands that BT be re-nationalised, despite that probably being beyond the power of the quango. A later presenter, who has been busy polling local opinion as recommended, even had a slide explaining how it was all Thatcher's fault for selling off BT in the first place, to the delight of the assembled.

My own argument was that anyone determined to get broadband could get broadband, and not by writing letters to BT or polling local opinions. Satellite is a lot better than it used to be (£150 install, £25 a month for 20Mb/sec) if one can tolerate the latency, and in Wales Exwavia has been spending the Welsh Assembly's thousand-pound grants on cheap microwave gear to link up homes, so it can be done.

But in Scotland, and England, the money is largely being handed to BT, so anyone wanting broadband now will have to build it for themselves.

When is a huge warehouse filled with single malt actually a problem? Read on...

Ronny is a typical Highland not-spotter: he runs a bed and breakfast on the East coast and takes bookings over the internet, but to see those bookings he has to get into his car and drive seven miles (11km) to the nearest public library with its internet connection. Broadband isn't a luxury, it's an essential – which is why he approached me at the end of the meeting to see if line of sight was a possibility.

A few days later he turned up armed with a telescope and tripod to establish if we had visual contact. Sadly the Glenmorangie warehouse lies between us, blocking ground-level contact, but from the top of my roof (where tripod and telescope are of little use) there appeared to be a line to his chimney pot – and, Fresnel-zone permitting, a narrow line of sight is all that one needs.

The Fresnel Zone is a blimp-shaped region within which radio signals propagate. A microwave signal isn't straight like a laser beam but gets fat around the middle. Trees, buildings and other clutter can interfere even when line of sight exists, and this zone of possible interference is called the Fresnel Zone after the physicist who calculated it. 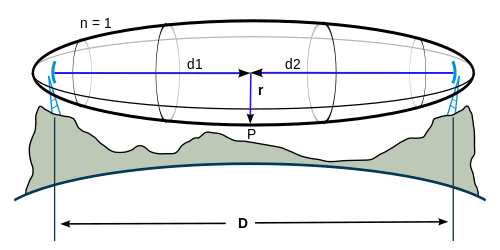 The Fresnel Zone, as shown by Wikipedia

Having said that, the microwave kit we're using tops out at 150Mb/sec, and the ADSL to which it eventually connects (at Claire's house) is only 5.5Mb/sec, so we can afford to lose most of the signal in transit.

The kit came from the nice chaps at WiFi-Stock who sell Ubiquiti AirGrid Airmax transceivers at £51.32 a pop. That's a very good price, though slightly less good when one adds the £35.01 for delivery (Highland surcharge) and the £5.51 for the privilege of paying with a credit card.

Chuck in the VAT and the whole bundle comes in at £171.79, but the kit itself is a joy to behold.

I've written about the AirMax before; how the lights on the side make alignment so much easier and the web interface lets even a complete idiot configure the radio link for optimal performance and regulatory compliance (if one wishes).

My Ofcom licence – £50 a year and required for my first microwave link to Claire's house – covers me for any number of points, so I just registered these new transceivers using Ofcom's website and everything is legal and above board. 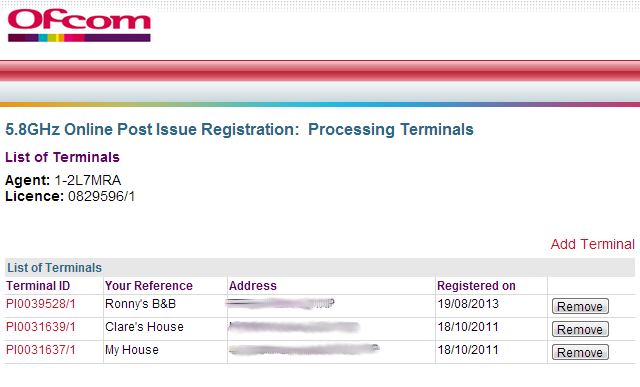 The AirMax radios use PoE (Power over Ethernet) and come with an injector and a mains adapter in a separate box. The radio now also comes with a USB injector, which turned out to be unexpectedly important.

First task was bolting another antenna to the outside of my house, on the opposite gable from the existing link, which proved easy enough. A cable from there runs into the loft though I did discover that the weatherproofing seal where the cable enters the antenna is blocked by one of the bolts, so some balancing atop a roof ladder with a Dremel could have been avoided with better planning. 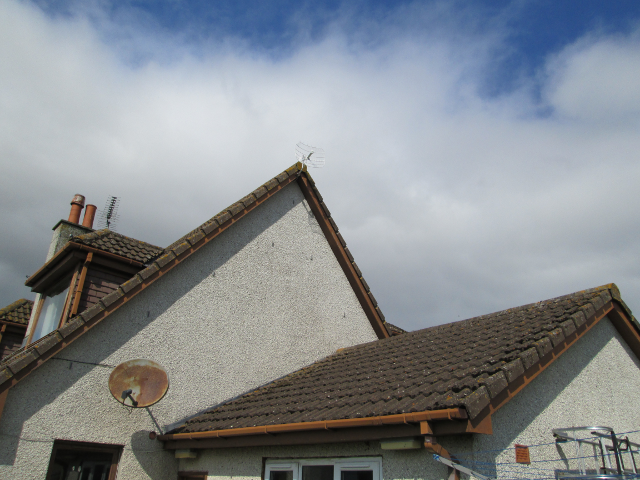 Equally, a glue gun was used to secure the sticking-up cable ties with which I hope to discourage birds perching. On the last antenna I strapped cable ties round and they worked great until the birds pushed them over, and since then the dish has been a welcome perch for our feathered friends and the radio is coated in guano.

So far this has had no impact on the signal, but I suspect it's no good thing and hope that a drop of glue on each cable tie will hold them in place. This too would have been much easier on the ground, but was done in the air (incredibly at both ends, as though I failed to learn the first time). 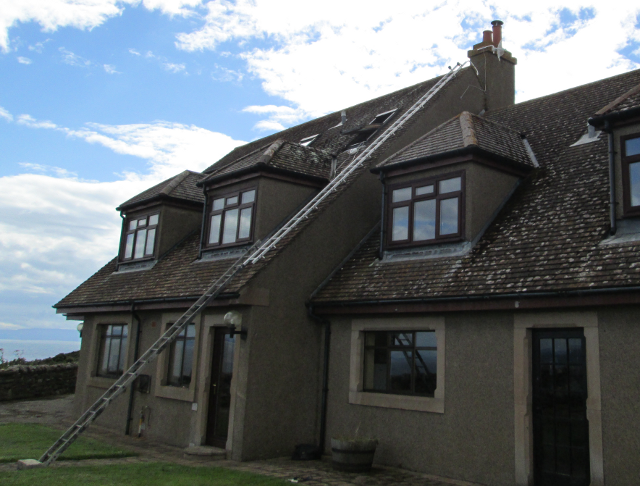