Curry and other Acorn staff were so confident because work on the broad design of the Electron was complete. By this point, the case and mechanical design had been done and so had the motherboard - they’re all stamped “Copyright 1982”, after all, as was the label on the base of the machine. But getting the ULA right continued to delay the machine’s release. 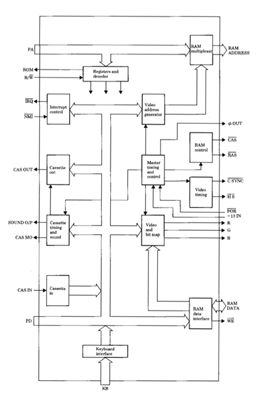 The delay was not induced, reveals Furber, by the complexity of a part integrating so much of the BBC Micro’s functionality, or of specific failings in ULA maker Ferranti’s production process, but rather trouble with the chip’s video circuitry. “On the BBC Micro we had problems with the video processor overheating, but we understood why that was the case in great detail,” he says. “So I was extremely careful when designing the Electron ULA to avoid a repeat of those problems. I completely redesigned how the high-speed end of the video worked to make sure everything was compatible with Ferranti’s ULA technology, and yet we still had problems with the high-resolution modes breaking up.”

Setting the Electron’s graphics to the two-colour 640 x 256 Mode 0 - a mode which took up 20KB of the computer’s 32KB memory, but was used by applications and games - caused pixels to twinkle: to change colour at random, essentially sprinkling the screen with noise. Back and forth between Acorn in Cambridge and Ferranti in Oldham went design tweaks and fresh sample ULAs as Furber and the Ferranti engineers attempted to pin down what was causing the problem.

“We had the usual kind of stand-off: Ferranti were convinced this was a design fault, and I was completely confident it wasn’t because we’d had all that trouble with the Beeb, and so I’d made sure everything was in spec. I don’t remember how many times we went around the loop. It was made a bit easier because Ferranti were in Oldham so we were not having to communicate half way round the world to tweak these problems but we did end up a bit of a technical disagreement between their engineers and our engineers, in particular me.

“In the end I convinced myself the voltage swing was too low on these ULA circuits and what we were seeing was on-chip noise being picked up. In the end, when we changed the voltage regulator on the ULA, increasing the voltage swing by about 50 per cent, the problem went away.”

Meanwhile, Acorn was busily talking up the new machine. Curry hinted that the upcoming Electron would not only help Acorn address the Sinclair end of the market, but allow it to pitch the BBC even more up-market than it had done so to date. “As the Electron comes in at the low-cost end of the market, so the BBC will move up with a range of business software and second processors.”

That was in February 1983. By now it was public knowledge that the Electron was on its way and that the new computer would run BBC Basic - no great surprise given the growing library of BASIC software and Acorn’s desire to sell the Electron on the coat tails of the premium machine. It was also known that it would lack the BBC’s graphics Mode 7, the Teletext mode demanded by BBC Engineering during the establishment of the BBC Microcomputer’s early specifications and which required a separate chip, the SAA5050 - this was dropped for cost reasons.

Acorn may thought that few punters cared about Mode 7, but the Telextext-compatible mode had one key advantage: it used only 1KB of the machine’s 32KB of memory, leaving more for the user than other BBC Micro graphics modes did. Without Mode 7, the Electron had to boot into Mode 6, which presented 40 x 24 characters and grabbed 8KB of RAM - a quarter of the amount installed in the machine. Other graphics modes, such as the 640 x 256 Mode 0 or the 320 x 256 - but more colourful - Mode 1 took up no less than 20KB, leaving very little left for the owner’s code.

Previously said to sport only a TV output and a cassette interface, the Electron was now known to incorporate a composite-video and monochrome monitor ports and an expansion bus edge connector. All the other BBC ports were gone, stripped out to save money and to preserve the exclusivity of the pricier machine, although Acorn planned to offer some of them as plug-on adaptors for the Electron’s expansion bus.

“Because of the way we have designed things it is particularly easy for us to bring out a machine for a particular market,” Curry told Practical Computing back in the day. “We can both spread them out and add more facilities, or we can prune them down dramatically to produce a much cheaper machine.”

Curry reiterated the price. “The standard 32KB model will cost £150 excluding VAT. There is no compromise on quality either - the keyboard, for example, is the same as the one on the BBC,” he told Popular Computing Weekly. 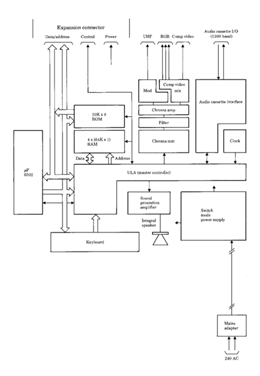 Curry and co. were certainly bullishly confident. During the spring of 1983, Sinclair fired a broadside against his nearest rivals - the Dragon, Oric, Camputers, Atari and Commodore - by lowering the prices of the ZX81 and the Spectrum: the 16KB Speccy could now be had for less than £100. Most of his competitors responded - Commodore, for instance, by boxing together its ageing Vic-20 and the machine’s proprietary tape deck. Curry, however, waved such changes away as fear of the imminent arrival of the Electron.

Except, of course, that he had stated the machine would launch in March, and it hadn’t. Instead, at the end of May, Acorn said the launch would take place at the end of August. A sensible timeframe, you might think: bypass the quiet summer, and focus on the upcoming crucial Christmas sales period. But back in 1983, the received wisdom had become one of ‘if you ship it, punters will buy it’, leading some observers to wonder what Acorn was up to.

In part, the company may have been attempting to run down stocks of the BBC Model A, a machine Acorn claimed it had now stopped making because “nearly all orders now are for the BBC Model B”, though it insisted the decision to end production had not been prompted by the imminent arrival of the Electron. Even so, Acorn didn’t formally discontinue the Model A, a machine not quite as good as the Model B, until 1 September, 1984.

Originally expected to be the most popular BBC micro because of the much higher price of the Model B, the Model A had in fact languished in comparison as well-heeled, aspirational buyers - or simply folk with sufficiently pushy offspring - opted to pay the extra cash for the functionally complete model. Yet the A still wasn’t cheap enough to compete with the Sinclair machines and other lower price rivals. That was the Electron’s planned role.

Next page: The launch
Page:
Corrections Send us news
113 Comments