A full year on from the release window Hermann Hauser had first let slip in June 1982, the Electron was launched, at the 1983 Acorn User Exhibition, held that year in London’s Cunard Hotel in Hammersmith on the 25 August. Potential Electron buyers would have been pleased to see many an add-on for the new machine on show too. What they saw from Acorn was a cream-coloured unit closer in looks, perhaps, to the Acorn Atom than the BBC Micro. The casing was styled by long-time Acorn collaborator and industrial designer Cambridge Product Design’s Allen Boothroyd, who had previously designed the Acorn Atom and the BBC Micro cases. Inside was a 6502A processor running at 2MHz (when accessing ROM, slower when touching RAM) and hooked up to the aforementioned four 64Kbit Ram chips, two 16KB ROMs and Steve Furber’s monumental ULA.

At the launch, Hauser boasted: “[The ULA] is by far the largest custom chip anyone has put in a micro, with over 2400 gates.” The chip would require 68 IO lines and measure 30 x 30mm. It would be the largest chip on the Electron’s motherboard, bigger even than the computer’s 6502 processor. 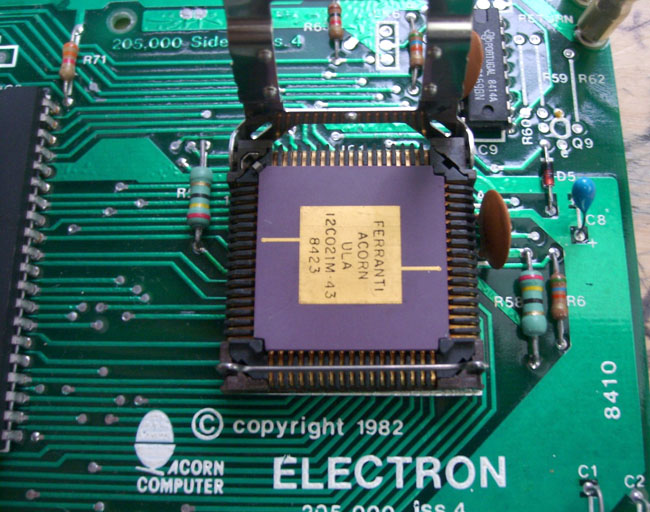 A secondary concern the ULA was able to address - or at least one Acorn executives seemed keen to talk up at the time - was piracy. During the early 1980s, a fair few knock-off Apple II machines appeared, almost all of them from the Far East. What made the Apple machine easy to clone was its big, clear motherboard layout and reliance on off-the-shelf chips. British micros had always been hard to copy because so much circuitry was hidden inside ULAs. “That is why Sinclair can be relatively safe with the ZX81,” Chris Curry said in 1982. “It is the perfect [computer] to copy in Taiwan, but for the fact it has ULAs in it.”

This was true too to a lesser extent of the BBC Micro, but Acorn seems to have been particularly keen to obscure as much of the Electron’s circuitry as possible. “I defy anyone to copy that chip,” Hauser said in August 1983.

No longer was the Electron set to ship for as little as £120 - it would now retail for £199. That was more than the 48KB Spectrum cost at launch and even more so now that Sinclair had cut its top-of-the range computer’s price to £129.95.

Thumbs-up from the pundits

Thanks to the Electron’s lack of Mode 7 and of many of the IO ports and slots found on the BBC, Acorn’s software arm, Acornsoft, said it was busily tweaking 12 of its most popular programs to make them fully compatible with the new machine. Acornsoft chief David Johnson-Davis said he expected it to be six months before the Electron’s software library was of a size to match that of the BBC. Johnson-Davis also made sure that two young programmers then quietly hard at work on a novel space trading game complete with fast 3D wireframe graphics were able to make their code run on the Electron as well as the BBC Micro. When Ian Bell and David Braben’s Elite went on sale the following year, on 21 September 1984, it ran on both machines.

By launch, Acorn had already begun seeding review machines with the press. The first write-ups appeared toward the end of August 1983, though these early evaluations were based on pre-production kit rather than shipping units, each machine with its own uniquely numbered - written on the top in marker pen - ULA chip. The major monthlies, with long lead times, didn’t get their reviews into print until September or October, but that wasn’t a problem as the Electron wasn’t going to go on sale until that time.

“We are told that the casing has withstood the rigours of the British Aerospace testing laboratories,” added Personal Computing Today without any hint of sarcasm or scepticism.

“Unlike certain other manufacturers, which let out a squawk and invalidate the guarantee if you even so much as think of reaching for a screwdriver, Acorn positively encourages users to delve about inside,” PCW’s Steve Mann noted gleefully. “The top of the case lifts off after removal of four screws and the ribbon cable that connects the keyboard simply unplugs... The board itself is beautifully laid out, with every component clearly labelled and plug-in connectors for the power lines and speaker leads.

“It would appear that Acorn has been playing around with the Electron design right up until the moment it was launched — other review machines have apparently contained a single ROM chip in place of the BBC Micro's two, and have shown evidence of the odd patch on the board; PCW’s version contained the full complement of ROMs and every component appeared to be in its final position with not a patch in sight.”

However, speed was an issue, reviewers found, especially those used to the BBC Micro. Steve Furber’s ULA may have caused all the delays, but it was the choice of cheap, high density DRAM and its impact on the Electron’s performance that drew the most fire. “A major quirk of the Electron is the way RAM is organised. In the interests of economy, four 64Kb RAM chips have been used, but as these can only be read four bits at a time, memory access time is virtually doubled so that the Electron is dramatically slower than the BBC,” wrote Keith and Steven Brain in Popular Computing Weekly. 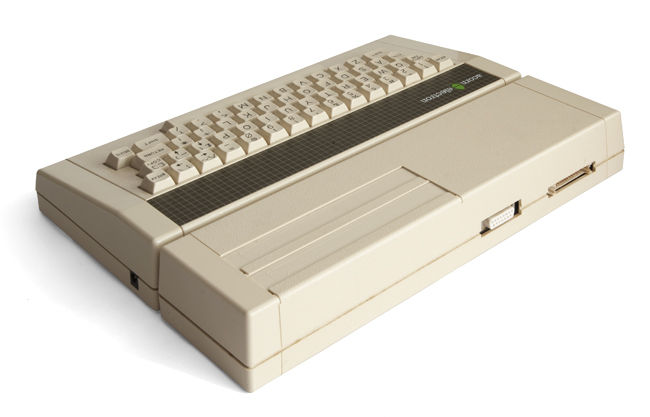 Putting the video sub-system into the ULA slowed down the graphics too “so that although many games designed for the BBC [Micro] will run on the Electron they proceed at less than half the speed, with very significant effects on their appeal” and thus “spoiling the ship for a ha’porth of tar”, the two Brains complained. Irritatingly for some game coders, the Electron’s ULA lacked the BBC’s ability to quickly scroll the screen sideways.

“In Modes 0, 1 and 2 the RAM access of the video part of the ULA is interleaved between the 6502A access. For 40μs out of 64 the processor is out of action,” explained Practical Computing’s Neville Maude. “In Mode 3 the processor is running full speed on alternate lines. In Modes 4, 5, and 6 [the CPU] runs at 1MHz all the time it accesses Ram. Hence a program taking ten seconds on the BBC in all modes can take on the Electron about 43 seconds in Modes 0, 1 and 2; about 34 seconds in Mode 3; and 20 seconds in Modes 4, 5 and 6.”

Integration of the sound chip functionality into the ULA limited the Electron to playing only a single sound and a single noise channel at a time, despite supporting multiple channels in its BASIC to maintain compatibility with BBC programs. “As with the Spectrum, the best that can be achieved is simple sound effects for games,” noted Steve Mann in PCW.