BILLION-TONNE BELCH emitted from Sun to hit Earth this weekend

It's a stormy forecast from the space met offices for this weekend, as those whose business it is to monitor these things say the Sun has coughed out a couple of hefty plasma belches in our direction and these can be expected to pelt the planet with particles in coming days. 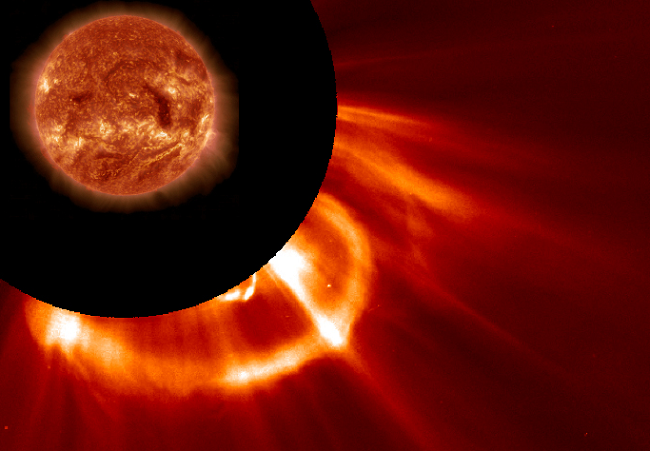 Better out than in

According to NASA, which felt that one of the Coronal Mass Ejections was worth its own announcement:

On August 21, 2013 at 1:24 am EDT, the sun erupted with an Earth-directed coronal mass ejection, or CME, a solar phenomenon that can send billions of tons of particles into space and reach Earth one to three days later. These particles cannot travel through the atmosphere to harm humans on Earth, but they can affect electronic systems in satellites and on the ground.

Experimental NASA research models, based on observations from NASA's Solar Terrestrial Relations Observatory show that the CME left the sun at speeds of around 380 miles per second, which is a fairly common speed for CMEs.

Earth-directed CMEs can cause a space weather phenomenon called a geomagnetic storm, which occurs when they funnel energy into Earth's magnetic envelope, the magnetosphere, for an extended period of time. The CME's magnetic fields peel back the outermost layers of Earth's fields changing their very shape. In the past, geomagnetic storms caused by CMEs of this strength have usually been mild.

The official US government space weather centre's latest forecast as this is written says there is a 55 per cent chance of a "severe" geomagnetic storm on the 24th, and a 25 per cent chance the storm will be only "minor". However that's for regions near the poles; most of us face only a 20 per cent chance of minor effects and just 5 per cent likelihood of severe ones.

Up and down in the high latitudes, however, they're probably looking at geomagnetic squalls scoring 7 or higher on the K scale. That could mean pesky fluctuations and alarms in power systems, loss or degradation to sat-nav and HF radio, and perhaps some spectacular aurorae, seen further south than normal.

The crew of the International Space Station will be paying attention, as they might cop a somewhat increased radiation dose and find their trusty habitat slowing down as it ploughs through the plasma rainstorm, perhaps to the point where it'll need an expensive extra blast or two on the rocket motors of attached supply podules to maintain orbit. It may pick up surface electrical charges, too. All these things are also likely to be an issue for people operating satellites in low orbit.

Supposing it's a real belter - which nobody's expecting - such storms can cause much more serious effects (see the official space Beaufort scale here). In general, though, for most of us they aren't much of an issue: but they are interesting. ®