HSA, Rogers promised, will be smart enough to know when to pass what data to what processor, be it CPU, GPU, or some other accelerator. Haar face detection, for example, works by running pixels of an image of a face through several passes called "cascades", some that benefit best from a CPU and some from a GPU, but which require both per cascade.

Processing of suffix array data structures, on the other hand, which are used for text and "big data" analytics, is a pipeline in which some stages work best on the GPU and some on the CPU. HSA will be smart enough to performing the compute-unit balancing in the Haar face detection and the stage-switching in the suffix data array processing.

It's not just performance that HSA is aimed at, however – it's also code complexity. "A huge motivation in the HSA architecture," Rogers said, "is ease of programming." 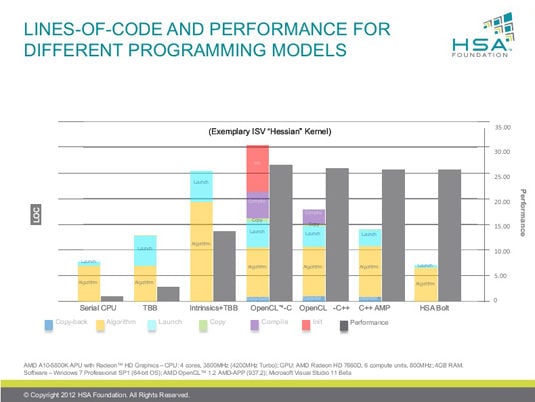 "The code complexity is going down," Rogers said, "which means that the number of applications will go up."

The final HSA specifications should be finished mid-2014 – but as Rogers cautioned, "Honestly, closing specifications in a foundation or consortium with a lot of members is an inexact science." ®

Conspicuous in their absence from the HSA Foundation membership list are Nvidia, promoter of its own CUDA parallel-processing platform, and Intel. "The HSA Foundation has invited both companies, and we would welcome either or both of them to join us," Rogers said when their absence was pointed out during the pre-briefing's Q&A session.

"I will say that over time it's my hope they will join in. Ultimately it's good for the industry, it's good for the application developer, it's good for end users when we get to open standards and the hardware companies compete based on performance, power, and extension features. Having multiple different but equivalent ways of doing the same thing really doesn't benefit anyone."