Feature In part one, the main focus was on MIDI’s myriad data forms and how it began chattering to synths and drum machines, but it was the sequencer that really demonstrated MIDI’s brilliance. In fact, so brilliant it was, that musicians even began to think they were brilliant too by association. Brilliant!

It’s early 1988 and it’s time for another Atari lesson. I’m in London at a private college learning all about sound engineering and music production, a bit of a rare subject then, which is why I’m having to pay for it. Rarer still for the times, were the lectures we’d get on digital recording systems. One of the tutors is touting his new book on the subject, it’s called The Art of Digital Audio. It’s still in print today and the author, John Watkinson, writes for me now occasionally, strangely enough. 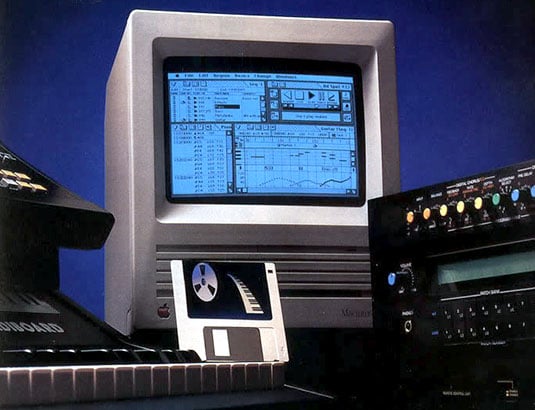 MOTU Performer was one of the earliest Mac MIDI sequencers

Today we’re in the programming suite and the lesson promises to take us beyond the fun-packed thrills of C-Lab’s Creator, as we’re old hands at that now. Instead, we’re looking at a companion product, the X-Alyzer. Besides being an editor/librarian that can store, sort and customise your synth sounds, it has a rather cool trick up its sleeve that takes advantage of SDS, a recent addition to the MIDI standard.

SDS? Wasn’t that a brain for Simmons electronic drum kit? Not on this occasion, as we’re talking about the Sample Dump Standard. Eseentially, it is sending audio-over-MIDI and just how cool that is... we shall see. At 31.25kbd, maybe it’s not such a good idea after all. More on this later.

MIDI sequencers were available as dedicated hardware or as software packages. The sequencer behaved like a musical word processor: it would record what you played, when you played it and also, more interestingly and expressively, how hard you played it.

Where the sequencer triumphed over simply playing parts in real-time was not just its ability to capture performances. You could do that easily enough by pressing record on a tape machine. The sequencer’s strength was in composition.

You might start off recording a sequence with a piano sound and then on playback try it out with a string sound. The MIDI recording was completely impartial, just like changing the font on a text document, you could use the note data anyway you liked. And if you couldn’t decide between piano or strings, then why not both together? With MIDI sequencing you could either duplicate the track and send it out to different devices or, in less sophisticated set-ups, you could have just one track and use two synths responding to the same MIDI channel.

So what’s the programming suite idea all about then? Not a multitrack tape deck in sight and there’s no desktop digital audio recording here for sure. It’s all about sequencing on the Atari with a bunch of synths and a beatbox. 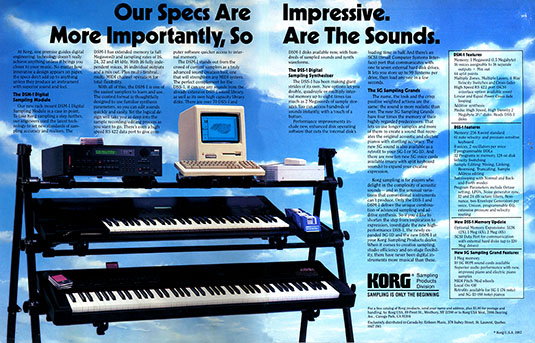 While the gear might change, the idea is essentially the same in studios of the time. Do all your MIDI sequencing in a cosy little room somewhere and then take the fruits of your labours to the main recording studio where these sequenced tracks can be recorded on tape to be adorned with vocals and non-MIDI instruments, guitars (remember them?) and other noisy stuff.

There are other ways around this too. In more sophisticated scenarios, the MIDI gear would play "live" into the mixer. It would be sync’d using a timecode track previously striped (recorded) on tape and this would free up the rest of the tape tracks for real instruments and vocals.

It all worked fine, but as you were sync’ing to a tape, it meant you would have to rewind it at some point – pretty much constantly when parts were being overdubbed. And those MIDI instruments would need to kick in at the right time too if they were being sync’d, so you’d need to wind back a bit further to be sure the sync box had a good enough run at things to read the timecode and get the sequencer rolling.

One way around it was to have a rough mix of the MIDI stuff and record it on tape – maybe just a stereo pair. But as you can see, when it comes to composition, you really don’t want to be tied to a tape machine, as it kills all the advantages of MIDI sequencing. After all, MIDI sequencing delivered instant playback from any point in the composition and cycled (looped) playback and recording options too. Who wants to wait for a tape to rewind? 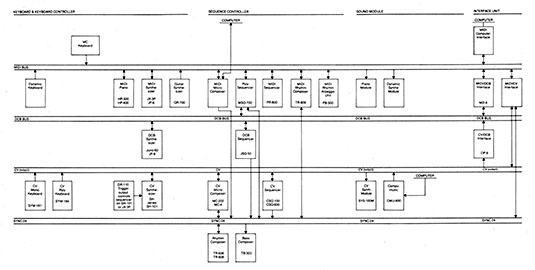 How MIDI achieved these feats goes beyond the joining of instruments discussed in part one. MIDI Clock was the answer in those early days and MIDI Timecode would follow, which was a vast improvement and a very different beast altogether.

MIDI Clock could be applied in a variety of ways. In a basic setup it would be a master and slave relationship. For instance, linking a hardware sequencer up with some drum patterns you’ve programmed on a drum machine. Both devices have their own internal MIDI Clock which is used as a reference for the recorded events.

To work both together and say, play some bass lines on an Ensoniq ESQ-1 sequencing keyboard accompanied by a Yamaha RX11 drum machine, you’d typically switch the RX11 from Internal Clock to MIDI Clock mode.

All you’d need to do with ESQ-1 is to plug in a MIDI cable from its MIDI out and plumb it into the RX11 MIDI in. Press play on the ESQ-1 sequencer and the slaved drum machine joins the party on cue and at whatever tempo the master sequencer is running at.

This scenario can work in the other direction too: with drum machine master, sequencer slave – as long as the slave is set to MIDI Clock and the master device is on Internal Clock. Oh, and on some devices you’d need to be sure the master device was set to transmit MIDI Clock.

The technical aspects of MIDI clock had some similarities to DIN Sync used on earlier gear, the idea being to follow what was effectively a high-speed metronome clicking away at 24 pulses per quarter note (PPQN). Record this DIN Sync track to tape and the slaved gear would follow this timing clock, which would run at different rates depending on the original tempo. And talking of tempo, once the DIN Sync track was recorded, this was effectively set in stone. One other aspect of this early sync’ing was that you always had to play the tape from the beginning each time. 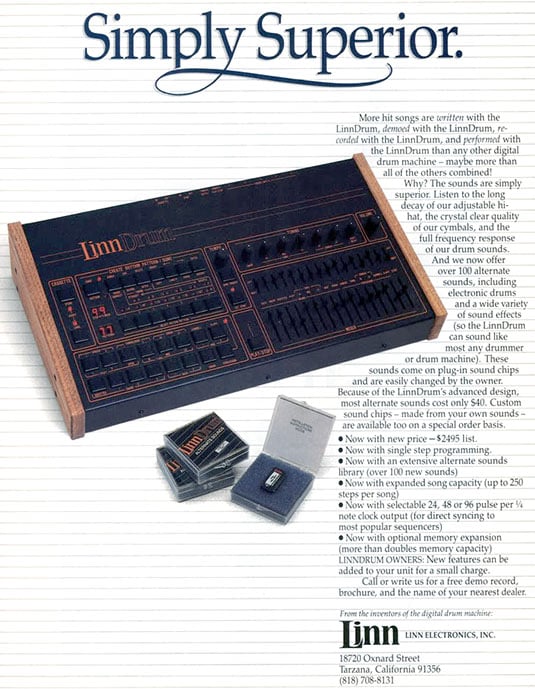 While MIDI used 24PPQN for its timing, the way it triumphed over DIN Sync and could play from anywhere was all due to the use of Song Position Pointers (SPP). In short, the intervals were calculated. So in a song with a 4/4 time signature*, from its beginning to the start of bar 5, would be 16 beats (4 bars x 4 quarter notes per bar) x 24PPQN = 384 pulses.

If you wanted to play from the beginning of bar nine, the sequencer would know it should play from 768 pulses into the sequence and transmit that information to any slaved devices too. The frequency of those pulses would, of course, depend on tempo, but it was the use of the number of pulses that were making the big difference here. These pulses were no longer simply teeth in a cog; they all served as a unique point of reference.

Now this was all happening within MIDI sequencers and drum machines. The MIDI Clock timing information wasn’t a code you could simply plug into a tape recorder and stripe a track with, you’d need a synchroniser for that. How these devices worked their magic is explained later in the box section on page 5: The missing sync.

* Four one-quarter notes per bar. In a time signature, the second number tells you what type of note (ie: the length of time it takes to play it) gets one beat. The first number tells you how many of these beats there should be in a bar (segment of time in musical notation). 6/8, for example, means that you should play six one-eighth note beats in every bar.

Next page: Got it taped
Page: