In the simple sequencer-with-drum machine scenario, as the work on the various sequences and drum patterns took shape, you’d want to chain these different parts together by using the Song modes on each device. It’s effectively a playlist of the patterns that amounts to an arrangement. Here, the Song Position Pointers come in very handy, so that when you jump to bar 33 to work on the chorus on the sequencer, the drum machine follows suit and plays the appropriate rhythm pattern. 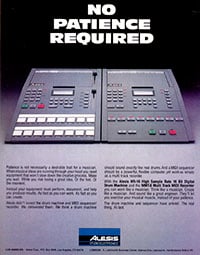 It’s all clever stuff and working this way enabled musicians to refine their compositions either on home set-ups or in programming suites that were going to be cheaper than clocking up studio time in a full-blown professional recording facility. You’d save that indulgence for when you were ready to commit to tape along with vocals and suchlike, only to find the studio had some new MIDI gear in it – a sampler perhaps – that you’d be smitten with and later wonder later where all the time went.

Still, thanks to Song Position Pointers and a decent synchroniser, you’d not have to wind the tape back to the very beginning to make changes when slaving a sequencer to tape.

Another useful aspect of sync’ing to tape was that if you didn’t have a great deal of MIDI gear or were dedicated to a particular synth, you could record a sequence to tape that featured a particular sound, then change the synth sound and record a different sequence part on a separate track.

While using Program Changes on the synth would be an option, for some arrangements this wouldn’t be sufficient. Also, using separate tape tracks would enable different EQ and effects to be applied more easily. For instance, from the same synth, you might want a bright horn section swimming in reverb, but a completely dry sound with a bolstered bottom end for bass. 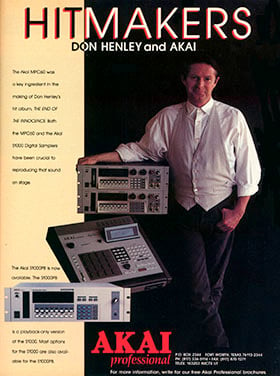 Multitimbral instruments did sort this problem out to some extent, but not all would feature multiple outputs or built-in effects. Using sync to offload different parts of the composition to tape to build up layers from a limited or preferred selection of MIDI gear, proved a very useful and practical application. Indeed, the samplers of the time had limited memory and this was an easy way to get the best out of them: recording multiple tracks with different sounds.

Hardware sequencers would come and go in various guises from dedicated keyboard such as the popular Korg M1 with its 8-track recording to Akai’s MPC60 – a drum machine inspired system with design input from Roger Linn. His revolutionary LM-1 Drum Computer pre-dates MIDI but was the first beatbox to use sampled sounds. A few years on and the buggy reputation of the Linn9000 led to the company’s demise. It had sampling, MIDI, a 32-track sequencer and the eye-watering price of $5000. The Akai MPC60 was its reincarnation. Its Swing function delivered a distinctive groove to sequences that contributed to its huge success.

Indeed, even though such features could be replicated in software sequencers as groove templates, there were no shortage of die-hard hardware fans who just didn’t want the fuss of a QWERTY keyboard, mouse and monitor, let alone the bother of floppy disks and an actual computer to maintain. The all-in-one box appeal continues to this day, but for those keen to explore MIDI’s capabilities beyond note-taking, the computer sequencer was where it was at.

MIDI on computers happened very early on in its development, with Yamaha adapting the MSX for music. The YIS-503 and the CX5M version (includes SFG-01 synth module) when hooked up to various accessories, provided synthesis and composition tools along with 4-track MIDI sequencer, available on different cartridges. 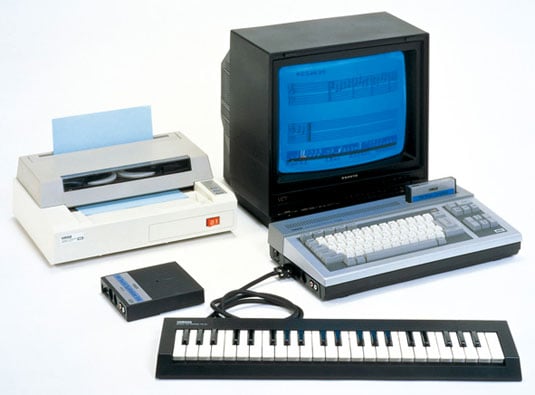 Yamaha YIS-503 based around the MSX PC

What made both scenarios a truly creative experience was that MIDI performances could be edited. Made a mistake? There’s no need to rewind the tape and record it all over again. MIDI recordings could be fixed, a note at a time, if necessary, which frequently it was. Drum machines too, had the facility to knock out duff notes, so duff playing – be it a brass line or a drum fill – could end up note-perfect. Yet to paraphrase Eric Morecambe, you could be playing the right notes but not necessarily at the right time.

Steinberg's Cubase Key edit: Grid match mode shows Quantized notes in red, those not in time are shown in other colours. A range of Quantize options appears on the left – click for a larger image

When you’re cycling (looping) around a sequence or building up a drum part, out-of-time playing is so obvious that just about anyone can spot it. It’s irksome. As any sequencer works to a particular resolution and timebase, the notes played into it can be altered in time too, just like correcting the pitch of a note. To take away the guesswork regarding how many "ticks" a note (or drum sound) needs to be shifted to be in time, a function called Quantize was implemented on all good sequencing gear, including drum machines.

In simple terms Quantize performed timing corrections, making everything snap into place and, regardless of musical prowess, it was a godsend. This quick-and-dirty fix had a few issues with it though. First of all, it could make performances sound robotic, which could be ideal for some genres, but it didn’t suit everyone. Also, Quantize at too low a resolution (say 8th notes) could end up "fixing" valid 16th notes. Sure, the bass drum and snare sound in sync, but the busy hi-hat pattern timing has suddenly halved.

To get the performance you wanted, Quantize needed to be applied with the appropriate note timing values and with an eye on the time signature. For instance, triplet values would need to be used for 3/4, 6/8 time and similar and the odd fancy drum fill could suffer here too. Sequencer developers would spend a fair few years designing different Quantize algorithms and Groove templates that knock the timing out slightly from the strict positioning to more musical and relaxed values.