Another early platform to gain popularity was the Commodore 64 which MIDI co-founder Dave Smith’s company Sequential Circuits produced the Model 64 sequencer for, plus interfacing hardware. A version from 1984 was on show at NAMM this year communicating with an AniMoog app on an iPad that used an IK Multimedia iRig MIDI interface.

No matter how old it is, MIDI just keeps on talking. 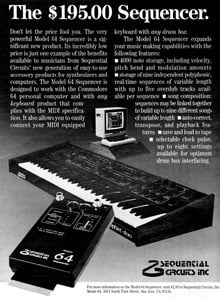 Roland’s CMU-800: Compu Music appeared in 1983, but it wasn’t MIDI. This software and hardware combo was designed to work on the C64 or Apple II. A year later though and Roland would began addressing the needs of computer users in with its MPU-401 (MIDI Processing Unit) interface hardware. Originally a breakout box, it became the standard MIDI interface card for PCs, shrinking to need just breakout cables for MIDI In/Out from the card – functions that would later be integrated into PC soundcards.

The attraction of computer music had software bundles cropping up everywhere, even Sinclair had a bash at it too, providing MIDI compatibility in the ZX 128 but on RS-232. You’d need to be a dab hand with a soldering iron to get this up and running – details on this hobbyist site here or go straight to the PDF here.

With a few notable exceptions, just about all of the mainstream hardware platforms required separate MIDI interface hardware. With the Apple Macintosh appearing not long after MIDI’s introduction, the platform was attractive to developers but you wouldn’t be finding a built-in MIDI interface on the Mac.

Apple Computer’s legal tussle with Apple Corps – the record label owned by The Beatles – prevented the Mac maker from producing any music equipment.

In due course, peripheral MIDI interfaces aplenty appeared, and in the US, things really took off for music and the Mac.

It was a different story in Europe. The high price of the Mac was the first hurdle. It was always expensive and Apple’s exchange-rate calculations have never been over-generous for its customers across the pond. On top of that there was the added cost of a MIDI interface and music software too.

Needless to say, musicians over here were keen to consider alternatives and the computer that, hands down, stole the show, was the Atari ST. Sure it was cheaper, but it used the same Motorola 68K chip found on the Mac and had its own user-friendly Mac-clone GUI called GEM. There was also one other very good reason why it sold to musicians: it had built-in MIDI ports. 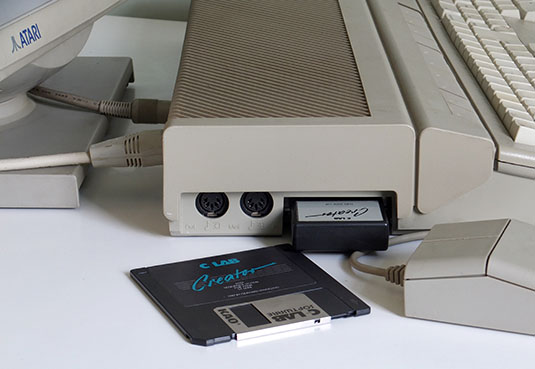 In the US, Mark of the Unicorn’s Performer was making an impression and the company also made Mac MIDI interfacing. This Mac hardware and software combination would heat up competition as functionality became better integrated. Two features, in particular, would expand MIDI’s potential for professionals. The most obvious improvement was to increase the number of MIDI ports available. This would allow instruments to be connected on dedicated ports and removed the need for daisychaining with MIDI cables.

MOTU’s MIDI Timepiece had 8 ports, enabling the Mac to address 128 MIDI channels (16 channels x 8 ports). Opcode’s Studio 4 did likewise and what both units could do was support daisychaining to another unit using the Mac’s serial interface cabling. As the Mac had both modem and printer serial ports, four 8-port interfaces could be linked up delivering 32 separate MIDI In and MIDI out ports for 512 MIDI channels in both directions.

And if that wasn’t enough for you, the big daddy of them all was Opcode’s Studio 5. A 2u rack beast with 15 MIDI ports – 240 MIDI channels in one box. Opcode claimed you could link six of these together for 90 MIDI ports, 1440 MIDI channels.

But what seems like excess was actually very practical. Studios would accrue MIDI rack gear, as a selling point – offering a range of synthesis, old and new – and having access to multiple devices without having to grub around the back to plumb it in was a welcome advance.

The predominance of the MIDI keyboard rather than other controllers is due in no small part to how easily it translates musical performances into MIDI data. The notes are already preassigned and the keys are simply on/off switches. MIDI drum pads and kits are another easy fit for similar reasons and there’s no major pitch concerns there, you just choose what will be played by assigning sounds to notes triggered by pads. 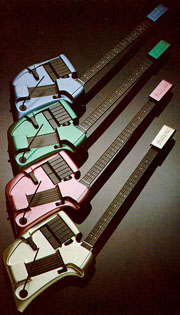 SynthAxe: MIDI guitars with a difference

By contrast, the MIDI guitar presented an entirely different challenge. With no preassigned notes, the MIDI guitar pickup has to determine the pitch of the string being plucked as it translates this event into Note On data. Roland’s GR-707 guitar was among the first to feature a MIDI out in its GR-700 footpedal brain section. The company has since developed a successful range of guitar "modelling" synthesisers and pickups.

I remember being awestruck by the futuristically designed SynthAxe in magazines, but its price was ultimately its downfall. Former employee, Alec Stansfield's site shows you what you’re missing. He's got one for sale too.

Yamaha had an early stab at the MIDI guitar too, with the G10. It’s novel shape wasn’t great for sit down strumming but the weirdest part was the strings. They were all the same gauge and tension – a design necessity, as an ultrasonic pickup for each string was used to sense where you were on the fretboard. Despite being very capable, this combination of quirks wasn’t well received.

Where Yamaha did succeed was with wind controllers. The WX7 was usually sold with a TX81Z FM synth module and had a professional action and a reed bender control. I recall these things would spew controller data as soon as you picked them up, which along with MIDI guitars, has always been a problem with more interactive controllers.

The MMA showcases of a unique variety of MIDI controllers available here.

The WX5 is the only wind controller Yamaha produces but it isn’t widely available. It was initially teamed up with the VL1m or VL70m acoustic modelling synths. Other makes include the Akai EWI series, which currently includes a USB model. Casio’s DH-100/200 ‘zanzithophones’ were MIDI but not exactly professional. Windsynth.net provides a wealth of information on wind controllers past and present.

The iPad Touchscreen is proving to be one area where alternative controller experimentation is rife. This isn’t just for musical instruments but for MIDI mixing tasks too.

It’s also turning out to be a product that showcases the capabilities of the Open Sound Controller (OSC), a communications protocol that can work independently of MIDI over networks of MIDI or translate its own messages including specific gestures to translate to MIDI messages. Hexler's TouchOSC is a good example and can load different gear templates – I've been using it with MOTU's Audio Express and it works like a charm.