Another edit window of great importance to many musicians was Score edit which provided the means to edit notes on staves** and even prepare the result for printing. Not every sequencer featured this, but Notator/Notator Logic was among the best in class in the late 1980s. Come the 1990s and, in the UK, Sibelius for the RISC-based Acorn Archimedes was favoured by professional score writers, as it was famed for its editing speed – with changes on lengthy scores performed in the blink of an eye. Sibelius remains popular in academia. It is now owned by Avid and is available on Mac and PC. 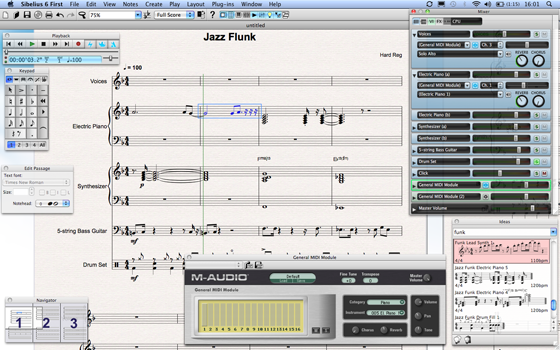 While these different ways of accessing MIDI data, be it note or controller, would allow corrections and additions, the other issue was how to string all these parts together. In most software sequencers, this is an Arrange window which will show recorded parts as blocks of varying sizes on a timeline, that could be copied, repeated, transposed, split up or deleted. You’d typically double-click on one of these blocks to edit the MIDI notes within. The original C-Lab Creator did things differently, by joining together sequences like a playlist. The playlist approach still exists in various forms to offer an alternative way of linking arrangements together.

Luckily, the arrival of Notator Logic did support the Creator files of old and for those switching platforms or just wanting to share their compositions, the arrival of Standard MIDI Files in July 1991 was the answer. By using Program Changes conforming to the General MIDI Standard that appeared a few months later, users could create the musical equivalent of an PDF file – something that would open on just about any platform and call up the right instruments at the chosen tempo so that playback would be close to the original. Editing would also be possible just as on any other MIDI recording.

Beyond musicians, the use of MIDI files has been popularised by gaming, on phone ringtones and of course, karaoke. The MIDI file spec has a few variations which are explained in more depth here. 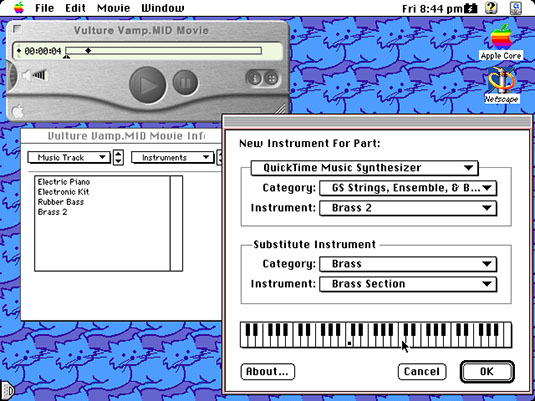 With MIDI instrument emulations now a given in music composition software, virtual knobs and sliders can alter even the most obscure synth functions and get recorded, and these edit windows can be used to smooth out those parameter changes and more besides.

Although audio-MIDI sequencing had existed for years with tape, given the computing power involved for audio, the marriage of MIDI with desktop digital recording, was not an overnight transformation with both sitting side-by-side on a music application.

To get close to that dream of seamless working with audio and MIDI, dedicated hard disk recorders did the heavy lifting. Instead of MIDI Clock, MIDI Timecode (MTC) was used for sync. Furthermore, MIDI Machine Control (MMC) issued the transport commands – the computer could control the recorder. The software sequencer and hardware digital audio recorder worked in tandem and back then, getting it to work for the first time – instantly locating and engaging tracks for record too – was as much fun as you could have with your clothes on.

** Or staffs, if you like. The five horizontal lines and four spaces, which, depending on where and how the notes are written, denote different pitches/various percussion instruments.

While there were several code options for synchronisation such as FSK*** or Smart FSK, the use of SMPTE/EBU (Society of Motion Picture and Television Engineers/European Broadcasting Union) timecode was the flavour professionals preferred. Initially used in video for edit decision lists, there were various frame rates available, but in Europe we’d opt for 25fps and the timecode would be recorded on tape at this rate before any sequencer synchronisation could begin. 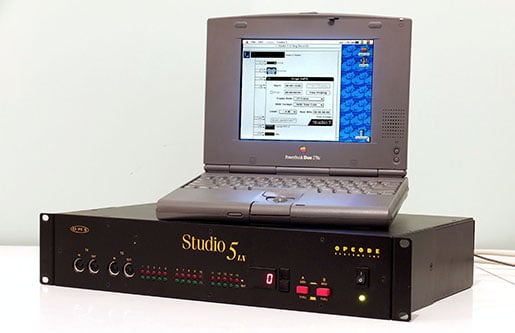 In the early days, the code would be read by the SMPTE/MIDI synchroniser to generate MIDI clock. You’d need to set up a cue point for this to start and also incorporate a pre-roll of a few bars on the sequencer so it had time to chase the code. As MIDI Clock was being generated, you also had to enter in the song tempo and time signature.

The synchroniser would then output that MIDI clock information and, as it was reading a proper timecode from tape (not just DIN Sync pulses), it could work out where it was in the song after rewind or fast forward, and output the correct Song Position Pointer to the sequencer. It worked, but there was room for improvement.

One of the problems of synchronising this way was that any tempo or time signature variations in a song had to be entered in manually as cue points within the synchroniser. The early models – I cut my teeth on a Bokse SM-9 – typically had unfriendly front panels with tiny displays and you’d have to work through these stages in 1/4 note steps.

It was also good practice to note the cue point, timecode rate and the tempo on the track sheet, and if this was lost it could cause a few headaches. I’d also write down the type of synchroniser used as there could be minute timing deviations between models.

With MIDI timecode, when working with tape, you still needed a SMPTE/MIDI synchroniser to read the recorded SMPTE timecode as before. Older MIDI clock sync boxes would have to be replaced, with Real Time Logic’s Event synchroniser becoming an early favourite for MTC in the UK. After MIDI clock, I thought it was amazing.

Now, instead of MIDI clock being generated by the SMPTE/MIDI box, it was MIDI timecode instead. These quarter frame MIDI messages would convey the tape timecode position to the sequencer, and you’d see it on the software as hours, minutes, seconds and frames. You’d still have to be mindful of the frame rate, but now you could set your own cue points from within the sequencer which would be saved with the song. And the biggest plus of all was that the song tempo and time signature information didn’t need to be entered into the synchroniser any more, the sequencer just ran itself, governed by MIDI timecode.

There was one consideration though, as MTC was a stream of MIDI System messages containing critical timing data, most would dedicate a MIDI port to it to avoid any bottlenecks with other MIDI data. In scenarios without tape machines, using MTC over a MIDI cable would enable supported gear to sync up and if used with MMC the transport controls could work together too.

*** Frequency-shift keying. The Smart FSK version could output Song Position Pointers, so the tape didn't need to be started from the beginning to sync.

Next page: Audio over MIDI, anyone?
Page: