Needless to say, the banks have been keen to bring these cases to a close and are duty-bound to contact a large proportion of these policyholders and send at least one letter. In theory, they should contact all policyholders but there is an agreement now to target policies from 2005 until 2011, when the selling of PPI products ceased.

“My task now is to look at the complaints we have already had to try to predict who are more likely to complain than others, and then focus on those policyholders to speed up the process, which would be in everyone’s interests.” 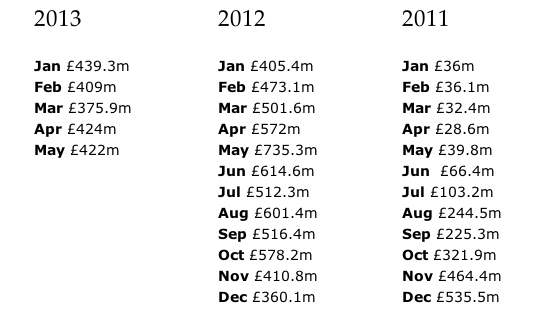 FCA figures for PPI payouts since January 2011: the total hit £10.5bn in May 2013. Mis-selling may have been rife, but the banks have had to make massive compensations, and the claims continue to this day.

Apparently there’s no deadline for these cases either. Even though the British Bankers Association appealed, the High Court ruling in April 2011 was against the banks. In the various court wranglings, the words "unfair relationship" and "mis-selling" have been used to describe the impact of some PPI policies on unsuspecting customers.

In a way, data mining is being used to calm nerves as it identifies groups of likely claimants, so now board members don’t lose sleep worrying over the losses if all the policyholders applied for refunds. After all, the task is not simply recording and reporting the structures you already know about – that’s just a matter of numbers going up and down. By contrast, data mining is about looking for patterns that you were not aware of or wouldn’t have thought of.

“You can look for correlations in all sorts of lifestyles such as the sale of goats' cheese and wine in a supermarket, but that doesn’t necessarily explain anything. One could be the function of the other or vice versa – or both of them could be a function of something completely different."

Confessions of a cash machine

Cole adds: "What I found is that customers with a deeper relationship with the bank are more likely to complain. For instance, customers that were using ATMs more – checking their account balance regularly – and those who have had more products over a lifetime (more active products), things like that. The ATM connection isn’t something you would have thought about up front but the data mining put the spotlight on this.”

These kinds of insights become apparent as data is handled in different ways to refine the results. “Data analysts tend not to have the greatest discipline when managing the data they use. I think it’s inherent in the way you work, as you need to be open to new ways of looking at things. It’s not called data mining for nothing,” says Cole. “It’s a good term because it illustrates that you don’t always know what you’re looking for.” He describes a typical scenario and how data mining insights are adopted by a company.

“So you have your data and you’ve identified pockets using a statistical algorithm. The next job is to try to profile it: what’s the age, gender, where do they live? If that’s what the marketing requirement is. If it’s a matter of risk then you’ll see what is their income, when did they last default on a loan?

"When we get to the application stage, there are often three areas. One is the direct application of your output, so whether it’s some sort of segmentation or credit score or ranking of customers likely to complain, that would go into the operational parts (and be used operationally by those doing the campaigns).

"Then there’s the commercial aspect of it. What’s the impact on the profit and loss, and the revenue? By how much could the bank reduce its burden of interest payments if it were to push forward a lot of complaints? And then there are the insights of gaining customer understanding.

"In this case, it’s to discover who are the complainers or who are the more risky people. When you get to this stage you need illustrative PowerPoint slides, of course, with a few data points and a few charts.”

For Cole, insights that come from data mining are not simply received on the nod. Presentations are made to internal stakeholders and, when you're dealing with a major High Street bank, acceptance of your findings involves numerous steps along the way.

“There’s often a lot of spin work to be done when you have created insights to actually get it into the organisation,” he concedes.

So after all that effort in the search for insights using big data derived from 20 million records – along with analytics and algorithms – at the end of the day, there’s still a person in a suit who decides if it’s actually of any significance to the company or not.

It’s a pity that we don’t have those people in banks any more to decide the merits of individual customer loan applications. Instead, data mining of your past will determine your future and, just as High Street banking has found out with the PPI mis-selling, these things can come back to haunt you. ®

* Our dear, dear grammar gurus: Yes, it's "industry-specific" terminology, which essentially specifies how much further back in time the data capture is compared to the present moment (which is also constantly shifting forward through time)... And while you could say "how recently it was captured" instead of saying "recency", it takes more words to do the former, and statisticians and analysts appreciate the brevity of the latter. Just accept it and move on. We have. – Sub Ed