If Congress will fund it, that is

Video NASA is pressing ahead with plans to capture an asteroid, pack it in an orbit around the Moon, and then send up a two-person crew to investigate and take samples, and it has released a video showing how it plans to achieve all this. 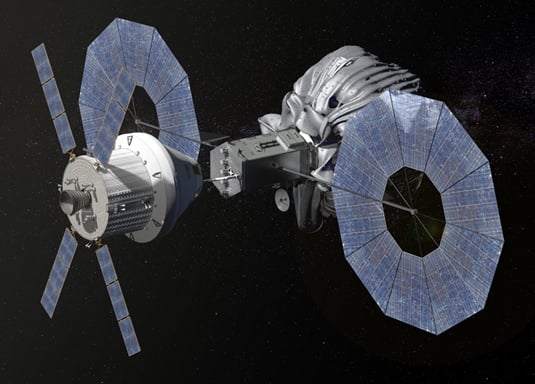 Over the last few months, NASA has been taking submissions for ideas on how to accomplish its goal of bringing an asteroid close to Earth for study – although not too close. Now it has released the plans for how it will go about bringing the shards of the Solar System in for inspection.

The space agency is planning a two-vehicle mission. The first launch will be an unmanned asteroid catcher, which will nuzzle up to a small asteroid and encase it in a "capture bag." Two solar-powered ion thrusters using xenon fuel will then maneuver the asteroid into a parking orbit around the Moon.

In the second stage of the mission, two astronauts in an Orion Multi-Purpose Crew Vehicle will be launched on the as-yet unbuilt Space Launch System (SLS) heavy-lift rocket to rendezvous with the space rock. The astronauts will head in towards the Moon and get a gravity assist from the planetoid, enabling them to reach the captured asteroid within nine days.

Once there, the astronauts will exit the Orion capsule and crawl up the outside of the capture craft and onto the asteroid bag, which will be rigged with handholds. After filming the rock's form, drilling into its core, and taking samples for six days, the crew will reboard the Orion for the ten-day trip home, again using a lunar flyby to gain speed without using fuel.

NASA has released a bunch of pretty pictures and a video showing how it will all be done, but it's going to take cold, hard, cash – and a lot of it – to make this mission a reality. Sadly Congress shows little willingness to pony up for it, with the House of Representatives threatening to kill funding for the mission.

That's not to say all is lost. If Elon Musk's predictions about the future Falcon Heavy rocket that SpaceX is developing prove correct, it has the potential to be much cheaper than NASA's SLS design. That could free up some capital, and the mission could possibly use Musk's Dragon capsule, as well. ®