No rude gestures, though, this is science

In an announcement that's going to be a boon to the tin-foil haberdashery business, scientists at the University of Washington (UW) have successfully built a non-invasive system to remotely control the actions of humans. 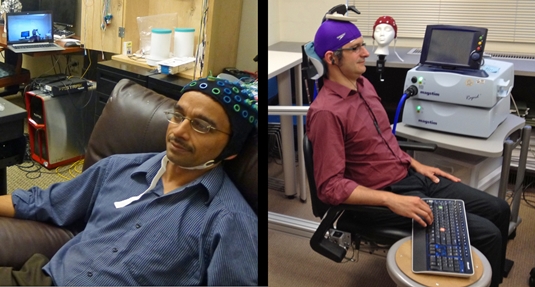 Mind control from the Ministry of Silly Hats

On August 12, Professor Rajesh Rao, wearing an black and green EEG skullcap set to monitor the left motor cortex of the brain, which coordinates hand movement, mentally moved a finger to fire a cannon in a video game. He made no physical movement; he just thought about the action.

The results were recorded and pinged across campus to the UW's Institute for Learning and Brain Sciences, where fellow researcher Andrea Stocco was wearing a rather fetching purple swimming cap containing a transcranial magnetic stimulation coil. Stocco wore earplugs to reduce outside stimuli and his hand rested on top of a standard keyboard.

The magnetic coil, operating at 69 per cent power, induced current in a spot on his brain that controls the wrist and fingers and caused a finger on Stucco's right hand to twitch and hit the keyboard, a movement the scientist described as like "a nervous tic".

"Brain-computer interface is something people have been talking about for a long, long time," said Professor Chantel Prat, Stocco's wife and research partner, who helped conduct the experiment. "We plugged a brain into the most complex computer anyone has ever studied, and that is another brain."

Four test sessions were carried out, with five to seven transmissions per session. Although the first try was abbreviated due to network connectivity issues, the team got the brain-to-brain control signal to work in over 90 per cent of the experiments.

That said, the team was keen to stress that the technology couldn't be used to force action against a person's will. While Stocco made the obligatory 'Vulcan mind meld" joke, Prat stressed that this was being managed by state-of-the-art equipment under strict laboratory conditions.

"I think some people will be unnerved by this because they will overestimate the technology," she said. "There's no possible way the technology that we have could be used on a person unknowingly or without their willing participation."

Mind-to-computer interfaces are nothing new, and UW has already had some success in implanting electronics directly into the brain to control epileptic seizures. But by transmitting brain-to-brain, the team thinks they can open up a whole new field of personal networking.

"It was both exciting and eerie to watch an imagined action from my brain get translated into actual action by another brain," Rao said. "This was basically a one-way flow of information from my brain to his. The next step is having a more equitable two-way conversation directly between the two brains." ®

Computers wired into our minds. What could go wrong?

Hang on, didn’t Firefox have this feature years ago?

Surprise! Wireless brain implants are not secure, and can be hijacked to kill you or steal thoughts

If you won't use your brain our machine will use it for you, Nissan tells drivers

No need to shave your head just yet, but poseur gamers might do it anyway