Microsoft Xbox One to be powered by ginormous system-on-chip

Why does a game console need billions more transistors than an Itanium?

Hot Chips Microsoft has revealed details of the chip powering its soon-to-be-released Xbox One – and it's one big ol' mofo. How big? Does a 363mm2 footprint – using a 28-nanometer process, no less – filled with five billion transistors impress you? 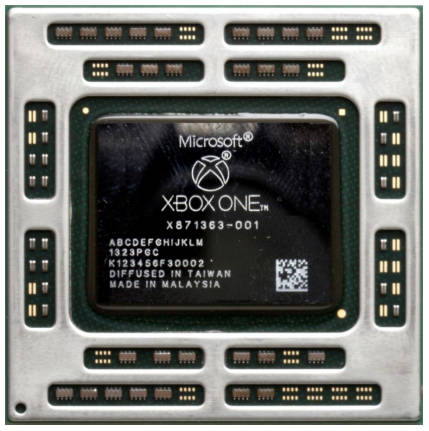 Perhaps Microsoft is planning to use this big boy for Halo: OverReach

By comparison, Intel's eight-core Itanium chip has around 3.1 billion transistors, and an Intel blog post from this March says that the most transistors the company considers practical to cram onto a die without the defect rate being astronomical is "around 5 billion" — which may also be the transistor count of Intel's Xeon Phi chip with 60+ cores.

Intel won't have to worry about the defect count in the Xbox One chip, however. In his presentation on the silicon behemoth at the Hot Chips conference at Stanford University on Monday, Xbox hardware man John Sell said that the chip will be fabbed by the Taiwan Semiconductor Manufacturing Company, more commonly known as TSMC.

Those five billion transistors are used to create a boatload of graphics and compute goodness inside the Xbox One chip – eight 64-bit compute cores based on AMD's "Jaguar" design, for example, which are kin to the Jaguar cores that will appear in the chip powering Sony's PlayStation 4. There's also an AMD-designed Radeon-class GPU that been tweaked by Microsoft to within an inch of its life.

"Almost every aspect has been customized," said Sell, "either a little or in some cases a lot."

Interestingly, the CPU and GPU cores will work together using shared memory, such as is being promoted by the HSA Foundation, which led a four-hour tutorial on heterogeneous system architecture earlier at Hot Chips, and which The Reg told you about in excruciating detail. We say "interestingly" because while AMD and Sony are HSA Foundation members, Microsoft is not.

In addition to those compute and graphics cores, the Xbox One chip also has 15 specialized processing cores, Sell said, to help with video, audio, display, and other chores, and to offload chunks of work from the CPU and GPU. Those 15 helpmeets also share the same memory as do the CPU and GPU.

There's also 47MB of cache and other on-die storage, which Sell said uses up "about half" of the chip's five billion transistors. By having this much storage on-die, he said, power requirements can be lessened, since the chip needn't hop off the die to gather data from either the Xbox One's 8GB of DRAM or 500GB hard drive.

Even when a consumer-level device is plugged into the wall these days, it appears that power savings remains top-of-mind. ®

A bit of trivia for the historically minded: the Xbox One's five billion transistors would be enough to populate about 2.2 million Intel 4004 processors.