A huge mega-canyon, nearly double the length of America's Grand Canyon, has been discovered beneath a mile of ice in Greenland. 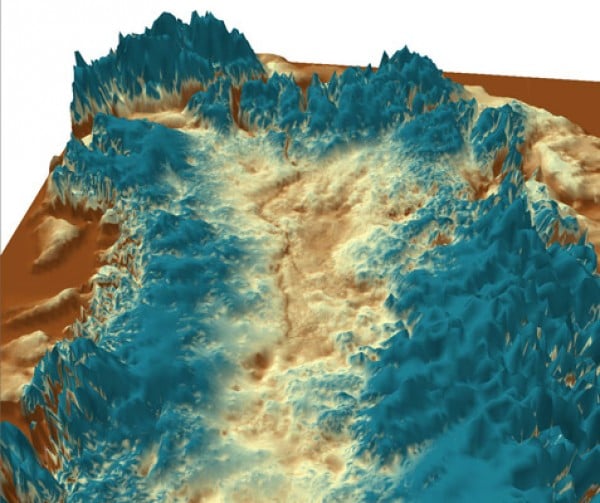 "One might assume that the landscape of the Earth has been fully explored and mapped," said Jonathan Bamber, professor of physical geography at the University of Bristol and lead author of the study. "Our research shows there's still a lot left to discover."

Boffins used thousands of kilometres of airborne radar data collected by NASA and researchers from the UK and Germany over several decades to map the landscape lying under Greenland's ice sheet. A large portion of the data came from the space agency's Operation Icebridge, a six-year mission that is the largest airborne survey of the Earth's polar ice ever flown.

Simple radio waves can map the bedrock by travelling at frequencies known to travel through ice. The amount of time it takes the waves to traverse the ice and then bounce back off the rock below tells the scientists how deep the canyon is.

"Two things helped lead to this discovery. It was the enormous amount of data collected by IceBridge and the work of combining it with other datasets into a Greenland-wide compilation of all existing data that makes this feature appear in front of our eyes," said Michael Studinger, Operation IceBridge project scientist at NASA Goddard Space Flight Center.

The newly discovered ravine could play an important part in transporting subglacial meltwater from the valley-bed to the edge of the ice sheet and ultimately back to the ocean. Professor David Vaughan of the EU programme ice2sea, which helped fund the research, said the find could help boffins understand the region better.

"This area’s ice sheet contributes to sea level rise and this work can help us put current changes in context," he said.

The full study, "Paleofluvial Mega-Canyon Beneath the Central Greenland Ice Sheet", was published in the journal Science. ®