North Korea's tubby tyrant Kim Jong-un reportedly had his ex-lover publicly executed by a machine-gun-toting firing squad after accusing her of making a group sex tape.

His former girlfriend Hyon Song-wol - also the hermit state's Unhasu Orchestra lead singer - was arrested along with orchestra boss Mun Kyong-jin and a group of other musicians for allegedly violating Nork laws against pornography.

They were all shot three days later, it is alleged.

Speaking to South Korean newspaper The Chosun Ilbo, a Chinese source claimed: "They were executed with machine guns while the key members of the Unhasu Orchestra, Wangjaesan Light Band and Moranbong Band as well as the families of the victims looked on."

The Seoul-based Ilbo reports that the group were accused of videotaping themselves having sex and selling the flicks in North Korea and China. In a strange twist, the musicians were also accused of having Bibles in their possession; seemingly a heinous crime in the anti-church communist paradise that still worships its dead "Eternal President" Kim Il-sung. 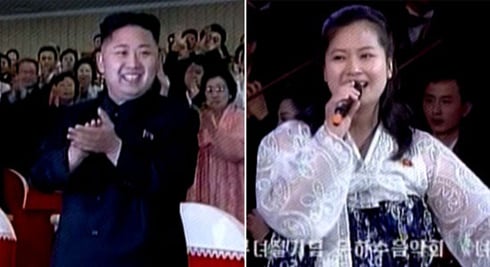 Kim Jong-un and Hyon Song-wol on Nork telly. Screencap via The Chosun Ilbo

After the execution, the victims' families were hauled off to the secretive nation's infamous prison camps, where an escaped prisoner recently reported that a mother was forced to drown her own newborn child on the orders of a sadistic camp guard.

Kim Jong-un's wife was also a member of the Unhasu Orchestra before marrying the chubby dictator. It is unclear whether she had any input into the execution of her husband's former squeeze, whom he stopped seeing about ten years ago - although the rotund megalomaniac only broke off the relationship after being ordered to by his father.

The South China Morning Post reports that Hyon – who went on to marry a soldier – was rumoured have remained more than friends with Kim. ®

Regular Reg readers will remember the state-sanctioned girl band we reported back in May. While the girls from that video weren't in the Unhasu Orchestra, it does appear that as members of the Moranbong Band they were ordered to attend the execution of their comrades.