Tencent offers 10TB of free cloud storage for all

Afraid of PRISM? China to the rescue!

Given the recent revelations about mass data slurping by the NSA, we were relieved to hear that a Chinese company has begun offering a whopping 10TB of free hosting to privacy-conscious punters.

After Chinese rivals Baidu and Qihoo 360 served up a terabyte of free cloud storage to punters, rival Tencent this week floated a 10TB giveaway, reports TheNextWeb.

The data bonanza requires users download an iOS or Android App, which gives them access to a terabyte of storage. As they use more data, Tencent will extend the amount of storage given away up to a whopping 10 terabytes.

This compares with a piddling 15GB freebie giveaway for Google Drive, up to 18GB for Dropbox, and 7GB for Microsoft's SkyDrive.

So, with that much storage, what could you actually keep in the Chinese cloud? Enter El Reg's patent-pending Ballmer scale. 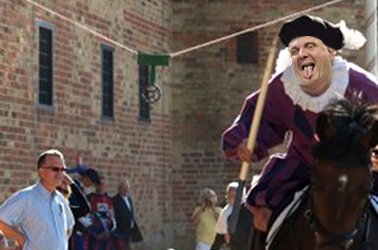 With Tencent's cloud, you need never run out of Ballmer-space

Why stick with just one image? Steve Ballmer is 57, which adds up to some 29 million minutes, or 1,798,743,600 seconds, so if we had trained a camera on Ballmer from birth we could use Tencent to store one image for every four seconds of the venerable CEO's life to date.

But what if we wanted to save not just Ballmer's likeness, but his essence? The human genome can feasibly be stored in as little as 1.5GB of data. Given that the person-to-person DNA variance is about 0.1 percent, then, the unique Steve Ballmer can be represented by around 1.53600 megabytes. Therefore, the Tencent cloud could store an impressive 6,708, 739 copies of Ballmer's DNA profile.

For the culture vultures among us, you could also store around half of the Library of Congress – but why would you want to do that when you could stuff Tencent with a virtual army of Steve Ballmers? ®

Could it be Beijing was right about games being bad for China?
Security28 Jun 2022 | 7