El Reg: Making everything smaller must have introduced some challenges initially. Were there any specific problems you recall with the prototypes?

Lou Ottens: “The EL 3585 had a capstan of 3mm diameter, but for a very small successor there was no room for the same size of flywheel. Therefore we chose  a 2mm capstan.

"For the test models we used 2mm stamping punches, which were beautifully straight and polished. But the music came out with a heavy flutter because of a microscopic triangularity inherent to the centreless grinding operation.”

El Reg: "The moving head array is a distinctive feature of Compact Cassette, how did this design come about?"

Lou Ottens: "The RCA cartridge had rather large recesses to accommodate room for the recording head and the erase head. That makes three holes where the tape is exposed when the cartridge is handled. We decided to minimize the tape exposure, so we didn’t want any big holes in the upper or lower surface of the cassette.

"As a result, the recording head, the erase head and the pressure roller had to move in. It is as simple as that. The patent people made it a patentable fact, stating that moving the heads into the cassette fixes the cassette into its position."

El Reg: "Did this arrangement have any impact on head wear?"

Lou Ottens: "We didn’t care about headwear, nor was the tape travel subject to scientific analysis. Headwear was not very likely, because the tape tension during winding and rewinding is very small in comparison with those in reel-to-reel machines."

El Reg: "The positioning of the retracting heads needed to be precise, yet could be successfully mass-produced, how much of an engineering effort did this involve?"

Lou Ottens: "I am not aware of special problems with the head array, apart from the fact that the draughtsman Jan Schoenmakers was a highly talented man on the drawing board, with a past as a toolmaker. That makes for reliable designs."

El Reg: "The Compact Cassette is a very pocketable size. Had you decided upon maximum dimensions to work to?"

Lou Ottens: "Because our aim was to make a pocket recorder, it should fit into the side pocket of my tweed jacket. I made a wood block that fitted in my pocket. That does not mean that carrying the actual recorder in my jacket was very comfortable or advisable." 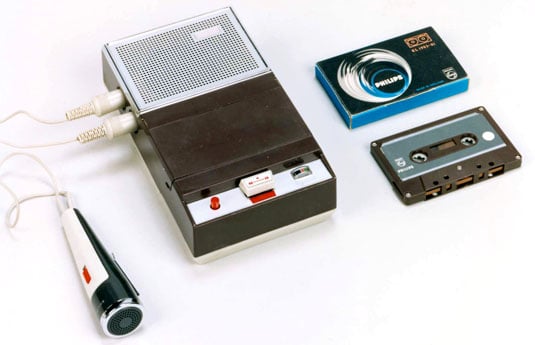 El Reg: "Was the size of the cassette determined by the chosen spool size and tape thickness?"

Lou Ottens: "The size of the spool had nothing to do with the size of the recorder. We had the size of the cassette, the size of the 2.5in loudspeaker, the volume of five batteries (to have 7.5 volts), and the room for the electronics and two connectors [DIN for audio and remote]. All those things had to fit into the block size. Not easy, I remember."

El Reg:" The hub of the cassette could have varied in size considerably and would effectively change the 'gearing' of the transport mechanism. How was this decided?"

Lou Ottens: "Making a very small hub does not help much, because it does not gain much tape space. It only adds problems in the gearing and extra winding time. It is not too difficult to reach an optimum."

El Reg: "In my experience, the C-120 tape was frequently unreliable, with the take-up reel often slowing down and tape gathering by the capstan. Was the specification designed to take these heavier cassette reels with thinner tape or did they come later?"

Lou Ottens: "Originally, we planned only the C60 and the C90, if I remember well. At the time of the original design we did not know much of the future tapes and their behaviour. Philips was not an important or even knowledgeable tape manufacturer. BASF, 3M, Agfa, Sony, etc were the names."

El Reg: "With these companies working on tape formulations, did the arrival of CrO2 and metal tapes come as a surprise?"

Lou Ottens: "Metal and CrO2 came as welcome surprises, if I remember well. They were hectic times."

Not 1/8in after all, but wider

El Reg: "Cassette tape is not 1/8in (3.2mm or 0.125in) as most presume, but bigger 3/20in (3.81mm or 0.15in). Did this choice of width present any problems for mass production to accommodate the specification and cassette tape thickness?"

Lou Ottens: "The width was originated by CBS, as 0.15in and we thought it wise to take over something that had been supplied to a big name as CBS [manufactured by 3M]. Actually, we had some initial jamming problems with the cassettes, which we at first had blamed on static charging. But it might also have had some connection with fraying due to difficulties in the cutting wheels that were not adjusted optimally, or ground securely, because later on the difficulties disappeared."