Finally it happens: MAN BITES DOG - after stabbing himself

A man who squared up to cops after a domestic disturbance stabbed himself in the chest three times before biting the officers' dog, according to reports from the US.

The incident began at about 7.45pm when a deputy sheriff responded to a report of a domestic dispute in the Californian city of San Jose.

The police officer said he had arrived to find “a man in his 30s standing outside, holding a kitchen knife, which he began waving at the deputy before charging him while he was still in his patrol car”, according to local news station KTVU.

A police spokesman said the man then went “beserk”, smashing the windows of the patrol car and slashing a tyre. Unnerved, the trapped copper desperately radioed for backup, which arrived in the form of a K-9 unit.

During the standoff after the reinforcements arrived, the suspect is said to have stabbed himself three times, inflicting “non-life threatening” injuries.

Deputies then unleashed Ski, their doggy deputy, who charged at the man – only to be met with an alleged bite from the suspect, who police say also punched and throttled the hapless hound. He was disarmed and arrested during his scuffle with the dog. 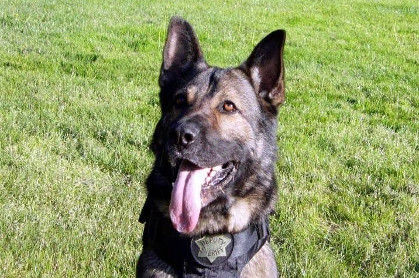 Ski the police hound, pictured before the alleged bite

Officers believe the man – who as of Wednesday had not been identified – was under the influence of drugs or alcohol.

Ski “had some minor bumps and bruises” after the incident, but was “expected to return to work soon” according to the Santa Clara County Sheriff's Office Facebook page ®.

Choose your fighter! March Mammal Madness pits poor, innocent critters against each other in mortal combat

Not literally and all in the name of education

Exec, two officers, one other charged

Um, almost the entire Scots Wikipedia was written by someone with no idea of the language – 10,000s of articles

None of you trained an AI on this data set, right? Right?

Pop quiz: You've got a roomful of electrical equipment. How do you put out a fire?

Who, Me? Careful with that rack, Eugene

Zoom records another bumper quarter as pandemic rumbles on, but Wall Street types quiz execs on how long it can last