Give us a break: Next Android version to be called 'KitKat'

Updated Google has announced that the next version of its Android operating system will be codenamed "KitKat", after the iconic chocolate-covered wafer candy bar. 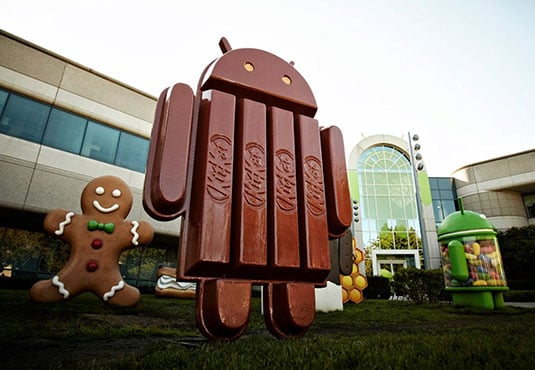 The Chocolate Factory needs a break from 'Jelly Bean', it seems

Previously, the leading speculation among the Android community was that the next Android version would be known as "Key Lime Pie", though that name was never officially confirmed by Mountain View.

Google assigns codenames to new Android releases in alphabetical order, and so far they have all been named for dessert confections, beginning with Android 1.5 "Cupcake" in 2009. The three most recent releases, versions 4.1 through 4.3, have all borne the "Jelly Bean" moniker.

The Android team reportedly settled on KitKat for the next version sometime in late 2012 – not that they told anybody outside the company about it.

The new release will be Android 4.4, rather than 5.0 as had widely been expected, according to the official Android website.

No details were given as to its launch date, which devices it will support, what will be the first device to ship with it, or how it will differ from its predecessors.

In keeping with its habit, however, Google marked the announcement of the forthcoming release by erecting a new lawn statue in front of building 44 of the Mountain View Chocolate Factory. This time, naturally enough, it's a version of the Android mascot made entirely out of KitKat fingers.

In an interview with the BBC, Google's director of Android global partnerships John Lagerling said that the decision to name the release after the candy was "not a money-changing-hands kind of deal" but an attempt to do something "fun and unexpected."

"We realised that very few people actually know the taste of a key lime pie," Lagerling said. "One of the snacks that we keep in our kitchen for late-night coding are KitKats. And someone said: 'Hey, why don't we call the release KitKat?'"

A phone call to Nestlé – which markets KitKat all over the world, except for in the US – resulted in the candy maker reportedly giving Google the thumbs-up in less than 48 hours, no doubt sensing a massive marketing coup.

In the US, however, KitKat is manufactured and sold by the Hershey Company, a Nestlé competitor. The chocolate was originally created by Rowntree Mackintosh of York, England, which licensed the brand to Hershey in the 1970s. When Nestlé bought Rowntree in 1988, that licensing arrangement remained in place – and it is to the Hershey KitKat website that the Android site now links. 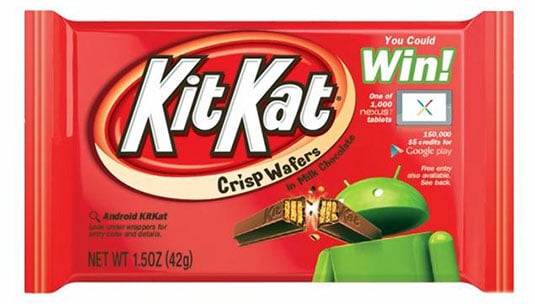 According to a post on the Android group's Google+ page, Hershey will also launch a contest promotion in the US, in which purchasers of specially marked KitKat bars will have a chance to win one of 1,500 Nexus 7 tablets or 150,000 $5 credits for the Google Play store.

As for what will be included in the new Android version itself, we have no idea – other than that Google says it aims "to make an amazing Android experience available for everybody" – but you can sign up on the Android KitKat website to receive updates as they appear. An email El Reg received back explained that Google "will send you information about the features of the release when it goes live." ®

As of Tuesday afternoon, Nestlé's KitKat website – the homepage for everyone in the world except the US – has been updated to display a parody of the Android announcement.

"The future of confectionery has arrived," the site proclaims. "Under its sleek exterior we've ensured maximum breakability in KITKAT 4.4. This is due to the refined praline software, crisp waferware and its unique chocolate unibody. Just unwrap, break, snap and enjoy."

There's plenty more, but why don't you just head on over and see for yourself?