Oh NO, we don't have money to pay you! Bow-chicka- EDIT *bzzzzt* 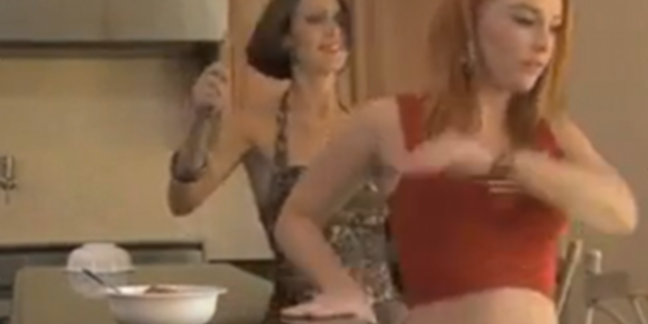 SFW Smut-lovers across the UK will be able to beat Cameron's censorship ban and watch grumble movies - as long as they don't mind all the rude bits being cut out.

A new website is now offering fully Tory-proof filth by taking pornographic films and then slicing away all the naughty moments, leaving only the appallingly scripted dialogue and delivery man-related sexual tension.

We watched a few of them in the name of research – a phrase which actually rings true for once, for there's little to enjoy about rude films without any rudeness.

Many feature tales of young plumbers and delivery men getting more than they bargained for when arriving at a job.

"So what will I have to do when he gets here?" one mega-permed lady asks of a chum in one of the films.

"Give him a touch here and a touch there. Bingo, you've got a large pepperoni," the friend replies, before the film cuts out as the ladies launch themselves at the pizza purveyor.

Another vignette depicts seven people of small stature peeking as Snow White tosses and turns in her sleep, waking with a large blush on her face. The film then, mercifully, ends. A rather creepy piece named A Pleasant Stick Up shows what happens when roleplay rudeness goes wrong (spoiler: not a lot) and in Mum Joins The Party, a mother is shown trying to encourage her daughter to make her party a little wilder.

"This isn't the seventies, Mom," the blonde, pneumatic teen tells her blonder, even more pneumatic parent.

The minxy mother then promises to "refresh your guests' punch", leaving the rest of the scene to unfold in the viewers' imaginations. Please don't tell us what happens next. ®