WD has taken the wraps off its first 2.5-inch hard drive designed for network storage roles, NAS nuts in need of a more compact connected storage box – and, crucially, teensy drives to put in it – will be pleased to hear.

Part of WD’s NAS-centric Red series, the notebook form-factor drives come in 750GB and 1TB capacities. Both of these are pre-loaded with the company’s NASware 2.0 firmware - code which it claims makes the drive better able to dance to the tune of any RAID controller it is connected to. 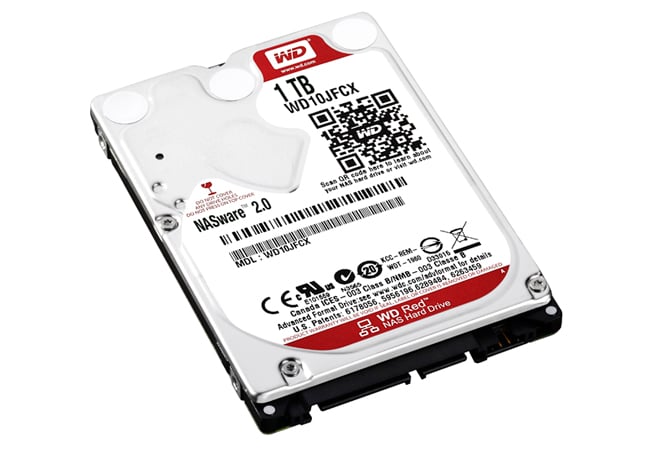 For instance, availability requests from RAID controllers won’t be ignored during start-up self-test routines, as they often are on desktop- and laptop-centric drives. The NASware 2.0 Red drive will pause the test to tell the controller when it will be ready for use, so the controller doesn’t assume it's broken, as it does when its requests are ignored or answered too late, said WD UK Country Manager, Jermaine Campbell.

WD reckons its Red hard drives – which now also include a 4TB 3.5-incher with 64MB of cache – are sufficiently resilient that the vendor can afford to bundle a three-year warranty against component failures and manufacturing faults, though you’ll note that data loss caused by these events is not covered.

The company claimed NASware 2.0's tweaks in this area give the drives “a 35 per cent mean time between failures improvement over standard desktop drives”.

You also get gratis 24 x 7 phone support, which also covers any hardware into which you slot your Red drives, WD said today.

If you opt for 2.5in drives, many big-name two-bay-plus NAS boxes can take them using 3.5-inch adaptors. They will be more quiet than 3.5-inch drives, but less capacious and of lower performance. Boxes designed to take 2.5-inch drives specifically are much more rare, but they do exist, particularly from lesser-known names. A case in point: Addonics’ Mini NAS.