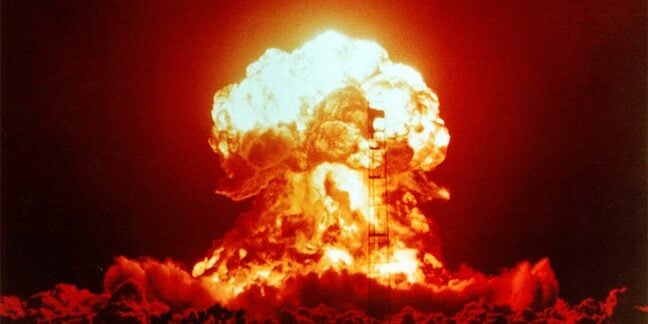 Pics Fears that an explosive fire at SK Hynix's Chinese fabs in Wuxi will cause a spike in chip prices are unfounded, says the company.

"Currently, there is no material damage to the fab equipment in the clean room, thus we expect to resume operations in a short time period so that overall production and supply volume would not be materially affected," company representative Seongae Park told Reuters. "In addition, we expect that the majority of damage will be covered through insurance."

According to local media, a chemical explosion ignited a fire in fabs one and two at the Hynix plant in Wuxi during a refit. Hynix has been repurposing the fabs for NAND production instead of DRAM, and reports say the explosion occurred when new equipment was being installed.

Despite some apocalyptic photos from people on the scene, Hynix says the fire was put out in just over two hours and only one person was injured. No date has been given for when production will restart, but analysts are still predicting a spike in prices.

"While the estimated start up of this China fab is unknown, we estimate it could contribute 15-20% of the worldwide DRAM capacity," wrote Piper Jaffray analyst Jagadish Iyer. "We expect this incident to have a favorable near-term impact on DRAM pricing which has been down anywhere from 5-15% for this quarter (ytd is up > 70%)."

That "favorable near-term impact" means higher prices for OEMs and consumers, and there were reports that other chip manufacturers such as Hynix rival Micron were shutting down sales until a full damage assessment was made public. Micron told El Reg the reports were incorrect.

The incident brought back memories of the 1995 fire at the Sumitomo Chemical Company's Japanese plant, which destroyed half the world's supply of the resin used in memory chip manufacture. RAM prices went through the roof until new facilities could be brought online and OEMs that hadn't buffered supply chains were hit hard.

More recently, torrential rains and flooding in Thailand knocked out Western Digital's hard disk drive plant near Bangkok, causing hard disk prices to double in two weeks, and then rise still further. This was good news for the competition but bad news for buyers.

While Micron's stock price is up over 6 per cent on news of the fire, it doesn’t seem as though OEMs have much to worry about this time. Hynix may be the second biggest memory chip firm in the business, but it seems that there's enough slack in the market to cope – based on Hynix's report, at least. ®

DRAM, bam, thank you Sam: Like a Flashbolt from the blue, Samsung flaunts its fastest RAM