I was pleased that the CD player lived up to its billing and handled non-CD audio discs without complaint. It will also replay MP3 and .WAV files on disc. I tried out an MP3 compilation which featured over 140 tracks. The remote control comes in handy here to type in track numbers for playback. You can also see track names and artist and dive into different folders both the remote and the front panel. 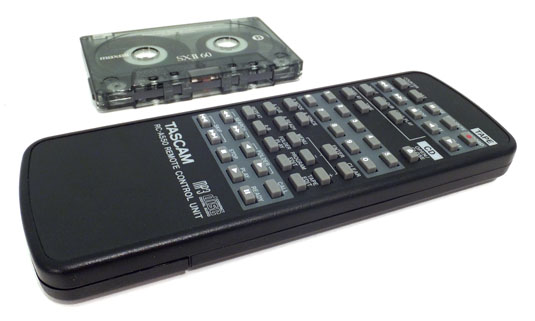 A neat feature adorning both the CD player and the tape deck are their separate pitch control (varispeed) knobs. You can vary the CD playback by ±12.5% and the cassette playback by ±10%. I had hoped I could get a super slow playback effect by setting the CD to its lowest speed and recording with the tape deck set to its highest speed. Afterwards, normal playback on the cassette deck would then sound slower still. However, it seems that varispeed tape recording is not permitted, perhaps with good reason.

That aside, varispeed is useful for tuning purposes and, in non-pitch critical situations, enables playback duration to be tailored to fit. Got an archived sermon tape to get through for a restless congregation? The varispeed could be a godsend.

The Tascam CD-A750 remote has a number of other features for cueing, repeat playback and even a continuous playback alternating between the CD player and the tape deck. A dubbing mode automates CD recording and sets a default level which can be adjusted too. The remote is absolutely littered with buttons and destined to become a constant companion. 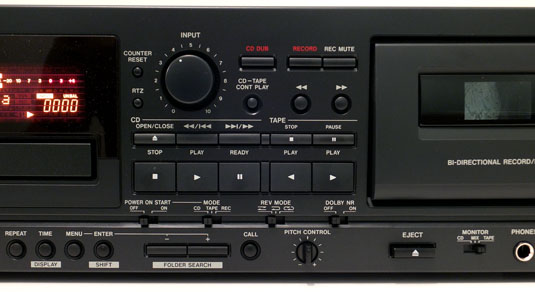 I say this because the biggest jolt when using the tape deck was the layout of the transport controls. The tiny fast-forward and rewind buttons defied logic and I was frequently tapping the forward and reverse play buttons by mistake. The remote makes it all a lot clearer.

Overall, the CD-A750 acquitted itself well and it has a number of useful features that you’ll be hard pressed to find elsewhere. I wondered if Tascam had any bespoke apps or suggestions for the RS-232 and parallel interfacing but the best it could come back with was that “it should work with any third-party controllers via the RS232 port.” Well that was an insightful response, thanks guys. Those Crestron and Extron links earlier give an idea of what can be done, iPad control is probably an option through various means.

Sellers' market? With so few alternatives, there's a price premium on these Tascam and Teac offerings

It's probably fair to say that Tascam's main focus is on other products that are more of the moment. Its tape deck portfolio sales are no doubt rather niche these days, which may well explain the price. The CD-A750 costs £699, which seems extremely high given that this is no audiophile tape deck and the CD unit is a player only.

If you’re happy to forego the balanced XLR interfacing and the serial and parallel connections, the CD-A550 is the otherwise identical alternative for £525. And if the CD isn’t important either, then the double deck 202 mkV is probably your best bet at £415.

Whatever your preference or intended purpose, there’s not a lot out there to choose from regarding alternative manufacturers. So if you’re after new compact cassette equipment that’s more than a toy, then it seems Tascam and Teac have got it taped. ®