Enterprise storage: A history of paper, rust and flash silicon

Has anything really changed since the punch card era?

The story of data storage is one of ever decreasing circles. What started as holes punched into cards, then into tape, became hard disks, floppy disks, then hard shiny disks, until eventually circles are no longer involved at all.

It is also the story of transitions from one medium to another as the IT industry searched for ways to hold data and deliver access to it fast enough to keep processors busy.

Here's a rough timeline, showing the overlap between key technologies.

Storage is required by a computer because its memory loses all its data when it's switched off; DRAM is volatile. When a computer is first switched on its memory is empty and both code, which tells the computer what to do, and data, the information that is processed, needs loading into memory from a persistent - non-volatile - store.

Punched cards, the original computer storage device, were first introduced around the 1930s and survived right through to the 1980s. They were rectangular cards with 80 columns and 12 rows. Each column represented one digital signal or character formed from the presence or absence of a hole. IBM used 10 rows for data while the upper two rows per column were zone rows for holding other information. The cards were passed through a reader which shone lights at each column. If there was a hole, the light passed through and was detected.

The 711's control panel wiring was used to read the punched card data into electrostatic memory. Typically a reader or readers would be attached to a host system such as a System/360 mainframe.

Various coding schemes were created, such as 6-bit BCDIC (Binary Coded Decimal Interchange Code) and EBCDIC (Extended BCDIC), so that groups of holes in a column could represent signed digits and then alphabet characters.

IBM's card code formats were adopted by the other mainframe computer suppliers of the era.

As computers grew in capacity, storing the cards themselves and the speed at which they could be read and written to became an issue, not to mention the problem of dropping the boxes that held them and even spilling coffee on them. Paper tape reels became an alternative, especially for the first minicomputers such as Digital Equipment's PDP-8.

Paper tape has a continuous sequence of rows and columns along its length, with the presence or absence of punched circular holes at each row/column intersection signalling a binary value. Paper tape came to minicomputers from its use in teleprinters, with data encoded using the ASCII scheme - American Standard Code for Information Interchange.

It was stored on reels or in fanfold form in boxes, streamed through optical readers and written with tape punch machines. When the storage medium is streamed through a reader the system has to know where it is on the paper tape so that it knows what it's reading. That means the tape has to move precisely under the head so that it reads the data tracks and doesn't miss anything. Sprocket holes made sure the tape was always in the right place. 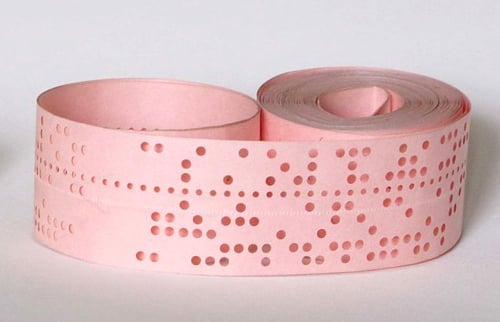 A Digital Equipment DEC Type PC09C paper tape reader read in data at 300 characters per second, roughly equivalent to 18KBytes/minute, compared with the punched card speed above of 108Kbits/minute,

Paper tape was smaller and more convenient than punched cards but it could rip. And as minicomputers grew in capacity, more tape was needed to store bigger programmes and more data - PDP-8 giving way to 16-bit PDP-12, which gave way to the 32-bit VAX in Digital's product range.

Each increase in the bit-size increased the computer's addressing capability, meaning bigger computer programs and more data could fit into the system's memory. The first VAX, the 11/780 system, had a 4GB address range, much larger than the PDP 11's 64KB. The 12-bit PDP-8 has a 4KB main memory size.

Paper tape speed was inadequate for these larger memory computers and a newer, faster technology was needed - and so digital magnetic tape was born.

Invented as a sound-recording medium by the German Fritz Pfleumer in 1928, magnetic tape was first used as a digital storage medium on the UNIVAC 1 computer in 1951.

Magnetic tape still has a continuous set of rows along its length, now called tracks, with a sequence of intersecting columns. Digital (binary) signals are still located at row/column intersections but are now recorded using a magnetic field's direction; north or south; plus or minus; one or zero. The recording density is vastly superior to paper tape and punched cards; 128 characters per inch using eight tracks on the UNIVAC 1.

The tape was stored on circular reels and read by a head as it was passed from one reel to another. 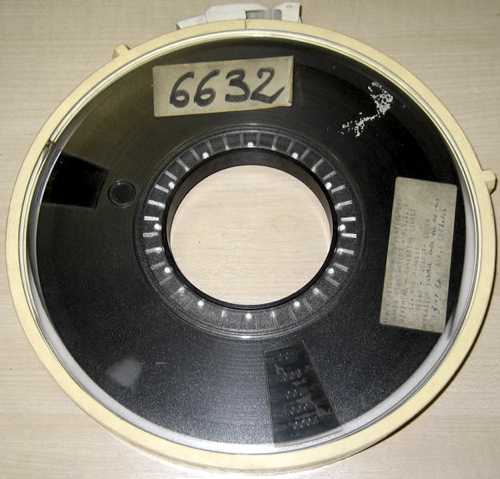 Magnetic tape provided important new features. As the size of the stored signals, bits, was progressively reduced, more data could be stored in the same area to give increased areal density. What is more, magnetic tape could pass through the read-heads quicker than paper tape, thereby increasing data access speed.

Next page: Disk sends storage into a spin
Page: