Anniversary feature Today marks the 80th anniversary of the first patent filing for a magnetic tape recording medium, though the tech I worked with was a bit more recent than that. Still, it has been quite some time since I last went shopping for tape.

I recall the last time as being a deal on a load of JVC miniDV cassettes that I still haven't worked my way through. So my browsing for analogue reels from a bygone era was surprisingly saddening. Like a stroll down a small town high street, where were those names that I used to know?

Ampex, BASF, 3M, to name a few, were once essential ingredients in music making. You want the best 16 or 24-track recording quality? Haul a 2-inch tape onto the deck, lace up and away you go.

If only it were so simple... as an assistant recording engineer (sounds slightly more sophisticated than a tape op) my mornings would begin with lining up the studio multitrack. I learned on a Soundcraft SCM 760 – which meant grubbing around on the floor with a trimmer and more often than not having to replace trimpots that had suffered from too much tweaking. I preferred Studers myself – all the controls for bias, gain and frequency were at eye level alongside the metering. They were big beasts, but built to last. 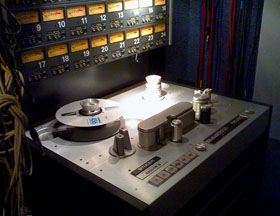 So after cleaning and demagnetising the tape heads, out came the line-up tape. This selection of low-, mid- and high-frequency tones was a reliable measurement of magnetic flux (specified in nanoWebers per metre, or nWb/m) used as reference. After some tweaking, you'd set up the record side, which involved recording your own test tones and – because recorders had two heads – one sync and playback – you'd make adjustments to the record head gain, while reading it from the playback head.

(I'm writing this all from memory... it's been 20 years since I last had to do this, as digital recording started to take hold)

Anyway, the idea of the line-up was to ensure that the recorder was optimised for the tape you were using. Not only could the tape formulation be different, but the recorder itself being analogue, it would drift a little and suffer wear too. Tape heads would eventually fall foul of friction and an uneven surface would need compensations long before the expense of a new headstock was considered.

I began my working life at GCHQ - Government Communications Headquarters – involved in experiments on one-inch tape under the auspices of recording boffin Roy Pagel. The research into The Abrasivity of Magnetic Tape in Varying Conditions of Humidity and Temperature was designed to address the problem of tape head wear in different environments – for “environments” read “countries”. Tape formulations varied from manufacturer to manufacturer, so maybe an Ampex tape would wear better in Hong Kong and BASF might run smoother in Belgrade.

It should come as no surprise that GCHQ would want to record telecommunications broadcasts – the clue’s in the name, after all. Back in the day I was running tests on SE Labs 14-track analogue instrumentation recorders. They could run at up to 240 inches per second - that's 20 feet spooling in front of you every second, 400 yards a minute, or close to 14mph. By comparison, a cassette tape at 1⅞ ips crawls along at 0.1mph: 2.4 miles per day.

The tests I was involved in ran at more moderate speeds and utilised a dummy head – its wear being measured by gradual changes in electrical resistance. The recorder itself was housed in a makeshift environmental chamber. The results are lost in the fog of memory, and you'd probably need to put in an FOI request to view them, so why am I wandering off on this tangent?

What I’m endeavouring to highlight are the shortcomings of analogue tape recorders both in terms of the medium and its impact on the components. It’s a problem that has dogged magnetic recording from its earliest days. The advent of digital recording – used for data, audio and video – has seen these issues minimised in a number of ways that will be looked at later.

One of the earliest attempts at audio capture goes all the way back to the smoke-etched recordings of Edouard-Leon Scott de Martinville in 1860, whose work enabled the first visual analysis of sound, although the possibility of developing a playback device evidently hadn’t occurred to him. However, playback of these early experiments has been made possible recently and can be heard on the historic audio site, First Sounds. 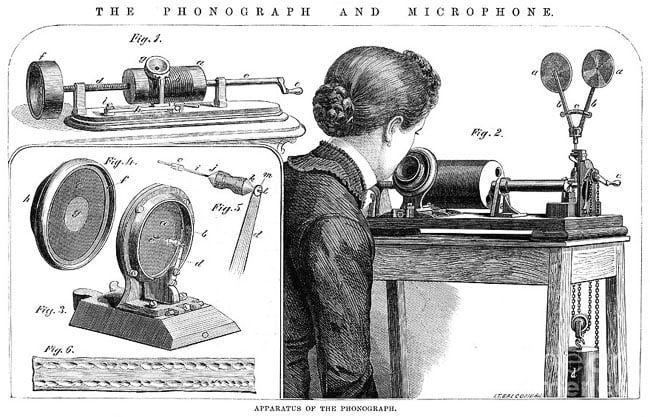 Edison cottoned on to the idea of recording and his method was to use a pin mounted on a sonically sensitive diaphragm to capture sonic undulations. The pin made impressions in a rotating tinfoil cylinder and the grooves created could then be played back from the same device – thus was the phonograph born. With a few refinements and format changes along the way (cylinder to disc, mono to stereo - even quad), we find sound reproduction from vinyl records produced today works in much the same way.

Next page: Drums and wires
Page: