Numerous variations on the theme of stylus and groove appeared as the 20th Century drew near, but all in all these were WORM devices - write once, read many. Commercial cylinder and disc production began in earnest with the major preoccupation being experiments in materials used that could withstand wear and minimise surface noise. Edison continued to refine the cylinder until giving in to the flat disc in 1913. While his format may have failed, his work did bring about the use of a diamond stylus.

The first Volta Labs recording was deposited at the Smithsonian Institute by its makers at the time.
Non-invasive sound recovery techniques allow it to be heard today

The disc came about from the experimental efforts of Charles Sumner Tainter at the Volta Lab in 1881 – he made a disc recording but couldn’t play it. Emile Berliner worked on producing discs, initially for toys, and formed Berliner Gramophone. The quality didn’t match Edison’s cylinders but he is credited with the format’s development. Eldridge R Johnson worked for Berliner and tackled the problem of creating a constant speed turntable. Johnson went on to form the Victor Talking Machine Company and later acquire Berliner Gramophone.

While various techniques have evolved, the idea of pressing a record – stamping the grooves into a disc – had now been established to deliver mass production of sound recordings. All well and good, but for content creators and consumers alike, this music on demand arrangement was a one way street. In these early days, beyond the master recording, the only thing you could do with the record was play it. It couldn’t be edited, let alone erased and re-recorded.

It was American engineer Oberlin Smith who, in the summer of 1878, first put forward the idea that magnetic media could be used to capture audio content. He’d met with Edison some six months earlier and was perturbed by the scratchy noises accompanying cylinder recordings. His initial idea was to use metal wire and indent it in a mechanical fashion akin to the grooves on cylinder recordings. When the audible scratchy noises appeared with this method too, he hit upon the idea of using magnetism to deliver the change of state that existed in undulating grooves. It was another 10 years before Smith’s ideas became known when he wrote an article in 1888 for Electrical World magazine – PDF here.

Smith suggested using a cotton or silk thread with steel dust or small fragments embedded in it that would be magnetised utilising the electrical output derived from a microphone. The use of small particles in this approach dealt with Smith’s misgivings regarding the use of steel wire which he had considered. He wrote:

“Another imaginable form of C [recording media] would be simply a hard steel wire, but it is scarcely possible that it would divide itself up properly into a number of short magnets. The magnetic influence would probably be distributed along the wire in a most totally depraved way, with nodal points just where they were not wanted. If it could be made to work it would obviously be the simplest thing yet suggested.”

Smith considered a range of options that included magnets on chains, but his conclusions were focused on practicality as he evidently favoured the rusty string idea:

“The cotton thread... would seem to be preferable to anything else on account of its cheapness, lightness and flexibility.”

Furthermore, Smith, a consummate technical author, brilliantly outlines the fundamentals to be observed for magnetic recording in his 1888 article.

“When in operation with undulatory current from the telephone A passing through the helix, the cord C becomes, so to speak, a series of short magnets grouped into alternate swelling and attenuations of magnetism. The actual lengths of these groups depends upon the speed of their motion, but their relative lengths depend upon the relative lengths of the sound wave; and their relative intensities depend upon the relative amplitudes of these waves.” 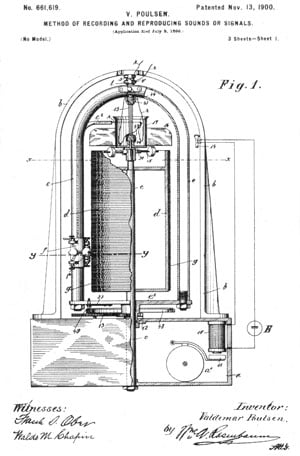 Given his patent in 1898, Danish inventor Valdemar Poulsen is often credited with being the founding father of magnetic recording, emphasised by virtue of the fact that he actually built a working device and Smith did not.

Poulsen's Telegraphone steel wire recorder made its debut at the Paris Exposition in 1900. Speculation varies as to whether Poulsen ever saw Smith’s Electrical World article – even in Europe it was to become required reading in academic circles – or the Memorandum and Caveat he filed with the US Patent Office in 1878 detailing his work. As Poulsen gained recognition as an inventor, Smith set about putting the record straight. Although Smith did succeed to some degree, Poulsen cast a long shadow over Smith's place in the sun. Yet somewhat fittingly, in 1913 Emile Berliner publicly stated that Oberlin Smith was real inventor of magnetic sound recording.

While Smith had misgivings about the "depraved" way magnetism would propagate along solid wire, Poulsen believed that the use of hard steel might enable varying levels of magnetism to be carried along its length. His invention bore some similarities to Edison’s phonograph as it also used a cylinder but rather than being coated with tinfoil, Poulsen’s Telegraphone had wire wrapped around its brass core. Instead of a stylus embossing metal film, a current running through the microphone to an electromagnet did the job invisibly. The variations in the magnetic field were captured in the wire as the drum rotated.

For playback, the electromagnet was deactivated and the microphone detached and replaced with a telephone earpiece driven by the magnetism from the spinning wire drum, as there was no amplification. What made the Telegraphone even more impressive was that the magnetic media could be erased and new recordings made. At the time, it was assumed the Telegraphone could replay recordings several hundred times, yet it turned out that the media was far more robust, clocking up playback over hundreds of thousands of times without significant degradation. Despite its sonic superiority – no clicks and scratches and a more natural sound – the louder, cheaper and more reliable phonograph gained popularity.