Steel tape was heavy, metal wire could tangle and neither were exactly cheap. Increased speeds did improve quality but it was the work of Austrian Fritz Pfleumer, who in cooperation with AEG, developed magnetic tape – a concept that although refined, is essentially unchanged in 80 years since his 9th September 1933 patent – DRP 649 408 Magnetogrammträger (Magnetogram carrier). 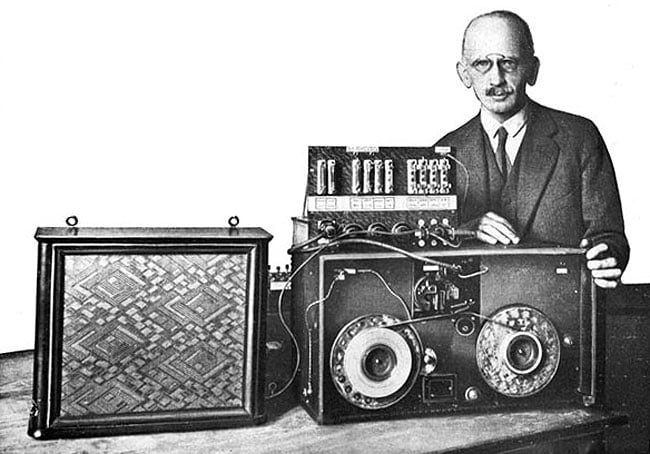 Initially, Pfleumer’s inspiration was drawn from his work at cigarette manufacturer Universelle. The company had tried unsuccessfully to apply thin metal bands around filter tips. Gold was too pricey and the bronze powder that was used instead would come off on the smoker’s lips. It was up to Pfleumer to develop a superior coating technique that, all in all, involved finer bronze particles and developing improved adhesion using a lacquer on the cigarette paper.

The story goes that he was on a business trip in Paris in 1927 when the thought occurred to him of adapting those shiny butts for recording purposes by using steel powder instead. His early experiments utilised sugar or molasses to formulate a soft caramelised magnetic coating of steel particles on a non-magnetic paper backing tape. Besides being more economical than the solid metal alternatives of the time, Pfleumer’s tape was easier to manage too. Not only was it lighter, but could be cut and stuck together again with the minimal of fuss.

In 1928 Pfleumer, an audiophile since his teens, built his own sound recorder and hawked it around various newspapers in Berlin. His audience also included technical experts and despite impressing them with the sound quality, long recording times and easy editing, there were no takers. Evidently convinced of the merits of his endeavour, he kept up his work, visiting companies and publications in other German cities for another three years.

During that time, he began discussions with AEG, Siemens and chemical firms too. On 8th June 1932, AEG took out an option on Pfleumer’s work for six months which was later renewed for a further 18 years. With various rights and licenses in the bag, the research at AEG began in earnest.

As the company celebrated its first 50 years in the autumn of 1933, the first fully functioning “Magnetophon” prototype was unveiled to staff spooling tapes made to Pfleumer’s specification and developed in AEG’s labs. In 1935 the company would publicly present the K1 at IFA. However, tape production on an industrial scale was beyond AEG’s comfort zone and IG Farben was tasked with manufacture. For some time, the IG Farben Ludwigshafen plant had been supplying AEG with carbonyl iron for Pupin coils used in telecommunications, and this material replaced steel powder for the tape formulation.

Eventually, iron oxides would supersede this magnetic material and in 1933 Pfleumer patented use of the black Fe3O4 and by 1935 moving to the more familiar reddish-brown gamma Ferric Oxide Fe2O3 that has endured for use on analogue tape to this day. The latter oxide also benefited from having smaller particles that made erasure easier from the permanent magnets utilised for this purpose. It took until the early 1970s for chrome dioxide tapes to appear and deliver a noticeable improvement. 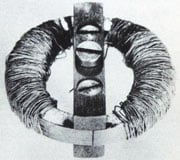 At IG Farben, Friedrich Matthias was working on a complete manufacturing process to deliver a durable base tape that was to be coated with magnetic material. Paper was prone to tearing and so an acetate base was developed that was 30µm thick with a 20µm coating – not far off what became the manufacturing norm. It was created in 60cm wide sheets spread over a 28m long belt that helped facilitate drying of this layer of liquid cellulose acetate, which was then treated with a binding solution of acetone, cellulose acetate and, in those early days, carbonyl iron. After rolling onto a drum the tape was sliced into 6.5mm wide strips. One source says 1000m of tape running at 1m/s would deliver eighty-four 16 minute tapes, although the figures suggest 64 tapes of around 15mins 37secs would result.

All in all, this production process took around 6 hours, speeding up in modern times to 1000m per minute. Cellulose acetate-based tape production continued into the 1960s, and despite being vulnerable to humidity and prone to breaking, remained popular as the breaks were clean and easy to repair. The tape didn’t stretch either, unlike some PVC alternatives introduced in the 1940s. Yet after a very good innings, polyester (Mylar) based tapes from the 1950s eventually usurped acetate’s reign.

The AES provides an excellent overview of Germany’s tape production. The move to the Agfa plant in 1943 was due to an explosion at the IG Farben facility which afterwards began using PVC as backing tape. The BASF name appears as it was an original founder of IG Farben following a merger in 1925. The company was refounded in the post-war years following the dissolving of IG Farben for its war crimes – producing Zyklon B for the Nazi gas chambers. 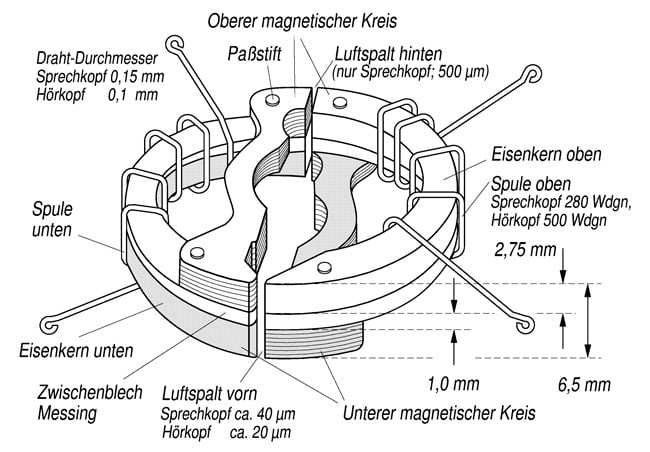 Also at AEG was Eduard Schüller, whose ring design recording head was patented in 1933 and formed the basis of analogue tape heads used to this day. Pfleumer had a similar head in mind too, which was patented a couple of years earlier. Both ideas focus on the use of a gap in the head between two poles in a magnetic circuit.

Schüller’s more elegant design was ideally suited to tape media and he had the idea to develop dual aligned heads too, which would enable stereo recording. The AEG team was working hard to find ways to minimise noise and improve the overall response of the Magnetophon, yet it was Walter Weber who delivered this breakthrough. Weber was a talented engineer at the Reichsrundfunkgesellschaft (RRG, German Broadcast Company) and had experimented with the dual heads to feed them different frequencies, in effect bass and treble. The idea being to overcome noise and improve the overall frequency response by separating the content this way.