Tape's NOT dead. WHOMP: This 8.5TB Oracle drive proves it

Oracle has introduced the world's highest capacity tape drive, all raw 8.5TB of it, and the fastest too.

The T10000D cartridge, which uses the same media as the previous T10000C format, stores 54 per cent more data than the T10000C. That means you can transfer your data from T10000C media to the "D" media and free up great big chunks of tape cartridge capacity.

A Streamline SL8500 library can hold more than 68 exabytes of data using the "D" cartridge, surely the cheapest and densest archival storage facility ever.

It might even be able to store all the hacks' notebooks used in El Reg's worldwide offices. 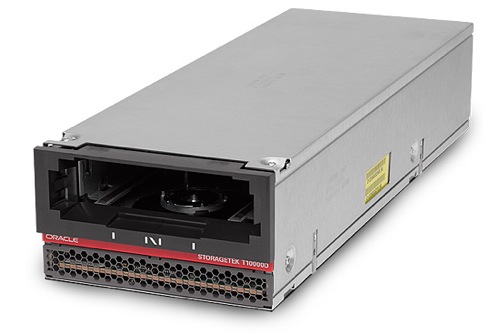 The new "D" format is, Oracle claims, "19 per cent faster than the IBM TS1140, while storing more than twice the data per cartridge".

A Data Integrity Validation (DIV) feature as tape cartridge validity can be checked without going back to the application that wrote the data. The T10000D drive is is backward-read compatible with all three previous generation T10000 tapes.

Oracle says it provides "a simple, low cost, open format interface for sharing data on tape between users and between applications" and enables users to find files in the host tape library "by eliminating the need to re-mount tape cartridges to retrieve index data or cartridge information such as volume information, file type, file size and creation date".

Tom Coughlin, founder and president of storage consultants Coughlin Associates said: "LTFS implemented at the library level is a significant step forward for the LTFS industry initiative and we expect it will dramatically increase the use cases for LTFS and open up new opportunities for tape storage. In particular, I expect the media and entertainment industry, already an early adopter of LTFS at the drive level, to quickly embrace LTFS implemented at the tape library level."

Hey, tape is not dead. In fact it's creeping steadily back into favour as big data spreads.

Both new products can be seen at the IBC2013 conference in Amsterdam in the Oracle exhibit, Hall 9, Exhibit 9, D15. No word on pricing and availability. ®