Crooks are using the NSA's notorious global web surveillance scandal in new ransomware: punters visiting booby-trapped websites are falsely accused of downloading illegal material, told their PCs are now locked from use, and ordered to hand over a cash "fine" to unlock their computers.

Cloud security firm Zscaler has spotted 20 hijacked domains hosting malicious web pages that attempt to trick naive web surfers into installing virus-killing scareware (because it's claimed their computer is supposedly riddled with malware) or handing over money to unlock PCs that have supposedly been used to download images of child abuse.

Marks are either confronted with a warning that malware has supposedly been detected on their computer, or a bogus NSA PRISM-themed alert. In both cases, the goal is to scare the target into paying the attacker to "fix" their computer.

The campaign started off by pushing fake antivirus software (aka scareware) on the pretext that viruses had supposedly been detected on a mark's computer and money had to be paid out to have the nasties removed. 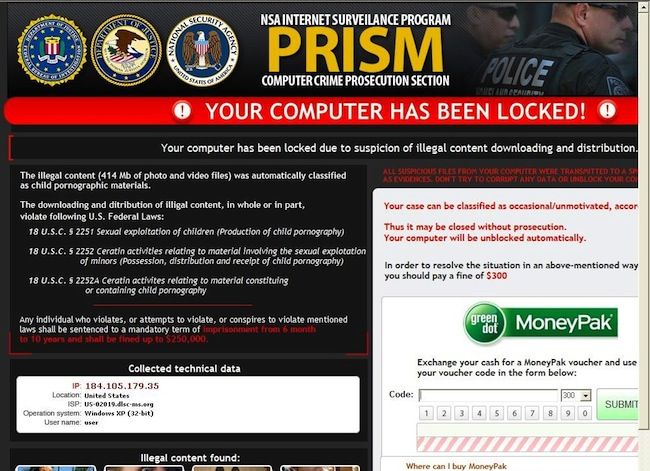 Accused ... how the ransomware appears in the web browser (click to enlarge)

"The attacker uses the recent news about PRISM to claim that the victim's computer has been blocked because it accessed illegal pornographic content," a blog post by Zscaler ThreatLabZ researcher Julien Sobrier explains.

"The victim has to pay $300 through MoneyPak, a prepaid card service."