'Forbes 400' combined wealth double that of a decade ago, now totaling ... guess 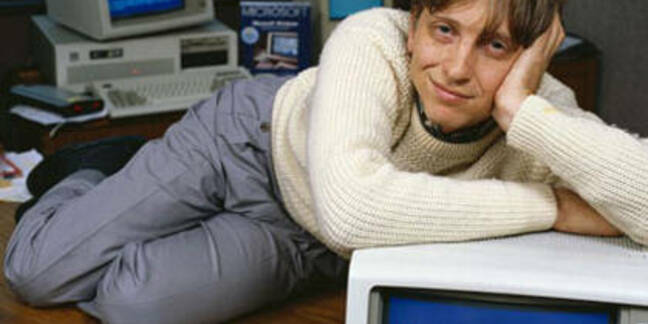 Bill Gates has regained his title as World's Richest Human, and has also been named the US's wealthiest person for the 20th consecutive year.

According to Forbes' annual survey of the 400 top members of the silk-stockinged class, Gates elbowed Mexican telecom magnate Carlos Slim off the summit of Mt. Moola, posting a net worth of a cool $72bn.

If the old saw, "The rich get richer and the poor get poorer" * comes to mind as you read this, your observation is well substantiated by Forbes' survey. According to their findings, those 400 swells are worth a combined $2.02 trillion smackeroos, $300bn more than last year and more than double their combined steaming heap of filthy lucre just one decade ago.

Pause for a moment to let that $2.02 trillion total sink in a bit. According to Forbes that figure is roughly equivalent to the gross domestic product of Russia, and according to our calculations those 400 upper-crustaceans could together provide every earthling with a check for around three hundred bucks.

And don't even think of rounding it to $2 trillion – that $0.02, remember, is a whopping $20bn. As US statesman Everett Dirksen once explained, "A billion here, a billion there, and pretty soon you're talking about real money."

Among other tech types, struggling yachtsman and Oracle CEO Larry Ellison's $41bn slots him in at #3 behind The Oracle of Omaha Warren Buffet's $58.5bn. Buffet's #2 position was ensured by a particularly good year that saw his net worth grow by $12.5bn, a level of monetary mushrooming that I daresay outperformed your portfolio, dear reader.

Right behind Zuckerberg – and filed firmly under "irony" – is Microsoft's soon-to-be-ex-CEO Steve Ballmer, whose fortune soared to $18bn due to the stock market's irrational exuberance when he announced his imminent departure from Redmond's corner suite.

But at a mere $18bn, Ballmer's hoard is a mere one-fourth that of his comrade in arms, William Henry Gates III. Gates, however, who has pledged to give away 95 per cent of his wealth to charity, is of the opinion that once you've earned a few million, increasing your simoleon stockpile doesn't make that much difference in your life.

"I can understand wanting to have millions of dollars, there's a certain freedom, meaningful freedom, that comes with that. But once you get much beyond that, I have to tell you, it's the same hamburger," he told a student questioner in 2011. "Dick's has not raised their prices enough," he said, referring to a chain of fast-food joints near Microsoft's Redmond headquarters.

But another celebrity sage, Sophie Tucker, once succinctly described wealth in a more direct fashion. "I've been rich and I've been poor," she said. "Rich is better."