As it was Apple stuck with the larger form-factor established by the original MessagePad. That device was replaced by the $499 MessagePad 100 in March 1994. The 100 was identical to its predecessor but for the more up-to-date Rom it contained. Alongside it debuted the $599 MessagePad 110, an even larger device – to accommodate longer-running AA batteries – with more 1MB of memory rather than 640KB and a 240 x 320 screen, slightly larger than the original one.

The following October, Apple introduced the MessagePad 120, which upped the memory to 2MB – a cheaper version had 1MB – but, more importantly, featured Newton OS 2.0 with its better character recognition. March 1996 saw the arrival of the MessagePad 130, a 120 with a backlit screen, 8MB of ROM and 2.5MB of RAM.

A year later, Apple introduced the MessagePad 2000, which featured a bigger, 320 x 480 greyscale display, 5MB of memory – 1MB of RAM and 4MB of Flash – a second PCMCIA slot and a new peripheral connector, the InterConnect port. It was bigger even than the 110, and was the most expensive MessagePad yet: it retailed for $799. It was “what the Newton should have been in the first place”, CEO Gil Amelio would say after his ousting from Apple, but it wasn’t the star of the launch. 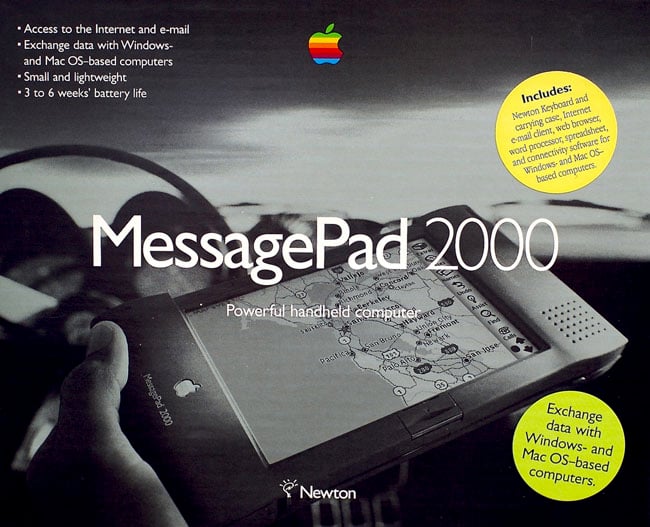 The eMate 300 outshone the 2000. This was a Newton laptop, a 2.2kg clamshell unit with the same screen as 2000 but arranged in landscape orientation above a physical keyboard. The 2000 ran on a 162MHz StrongARM 110 chip, but the education-oriented eMate had to make do with a 25MHz ARM 710a.

It was “the first of a new class of affordable mobile computer”, as Apple put it, and it’s arguably the first true netbook – particularly if equipped with the optional PCMCIA modem Apple offered. Never a serious productivity machine, it was nonetheless a great writer’s portable, able to upload work to a desktop Mac or PC.

The 300 shipped early in 1997, but its arrival was overshadowed by Steve Jobs’ triumphant return to Apple as “advisor” to then CEO Gil Amelio. The following July, Amelio was out and soon Jobs was back in control, albeit as “interim CEO”. He would eventually drop the "interim" but from July 1997 he ran the company right up until January 2011, the start of his final leave of absence on medical grounds. He died the following October.

The death of Newton

Newton died – as an Apple product, at least – on 27 February 1998, the result of Jobs’ aggressive pruning following his return to Apple’s helm. Apple released the MessagePad 2100 in November 1997, but everyone expected Jobs to axe Newton sooner or later. Unlike the Mac, they said, Newton had not been developed under Jobs’ watch.

That may well have reinforced Jobs’ thinking, but killing Newton was first a pragmatic decision. Apple had failed to license the platform far and wide as Sculley wanted to, though he’d been ousted before such an effort could really begin.

His successor, Michael Spindler, didn’t pursue it aggressively - he was keener to license the Mac OS instead - and considered shutting the Newton operation down on the recommendation of McKinsey, a consultancy.

After Spindler, Gil Amelio, who initially considered ditching Newton - which was costing the company $15 million a quarter, he later said - too but rejected the notion, attempted to make more of the platform, sensing its value as "not Mac", and that led to both the eMate and a plan to spin off Newton as a separate company, Newton, Inc. It almost happened, but Jobs pulled it back, perhaps feeling that a company in need of major revivification didn’t need the distraction of a spin-off process.

He soon realised that without major endeavour Newton wasn’t going to become the widely supported platform Sculley had dreamed of, and in its current state Apple couldn’t afford to do that – not if it wanted to revamp the Mac OS as Mac OS X. The Mac was the reason why Jobs’ company NeXT and its NeXTStep OS had been acquired by Apple in December 1996.

And even with more money: could Newton had cut it in the face of competition from Microsoft’s Windows CE, the precursor to Windows Mobile; the Palm OS; and the emerging Symbian platform? Probably not. 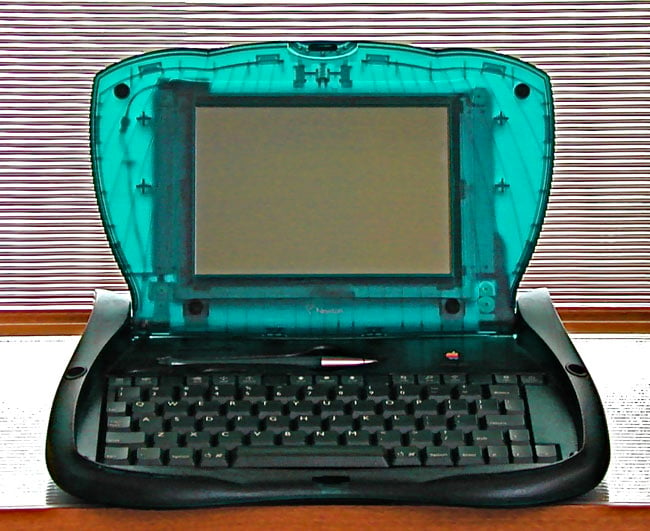 The eMate 300: designed for kids, loved by writers on the move
Source: raneko

Had Jobs kept Newton, perhaps the OS would have matured and, when the CEO eventually turned to the mobile market, found a home in the iPhone, as many Newton fans hoped when rumours of Apple tablets and such began to leak out in the mid-2000s. I think basing the iPhone on Newton OS (as it was) would have prevented Apple enjoying the success it did. Newton was too firmly rooted in the old world of pen computing, as were Windows Mobile and even Symbian, which is one reason why iOS was able to leap ahead.

iOS is based on Mac OS X, and thus came with a toolchain familiar to all Mac developers, not just the small number who’d also embraced the Newton OS.

But Newton has its place as one of the great "might-have-beens" of Apple and, indeed, mobile technology history. It still has its adherents, and for the early 1990s – despite the many, many gags – was impressive technology.

But it was too early. Even had Apple integrated cellular communications – as Motorola did with with Newton hardware, and as IBM showed in November 1993 with the BellSouth Simon, though that wasn’t based on Newton – it would have raised the price beyond the point where most businesses, let alone individuals, could justify the expenditure. ®