It's Grand Theft Auto 5 day: Any of you kids remember GTA the First?

Antique Code Show Grand Theft Auto 5 – one of the most keenly anticipated video games ever – was officially released today, although a few people apparently got their packages a few days ago.

The preview videos show it to be stunningly accomplished, and no doubt it will sell phenomenally well. Yet many of the young adults who make an excited purchase of GTA5 won’t realise that the title’s foundations were laid back 16 years ago in 1997, when DMA Design released the inaugural title of this groundbreaking but always controversial series. 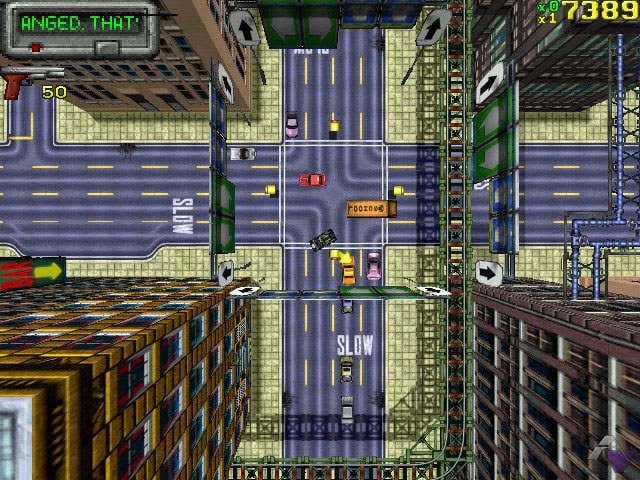 Utilising the more limited PC capabilities of the time, GTA went for a top-down view of the criminal action, with people and Matchbox-style cars represented as rotating bitmaps. The impact of arcade originals such as Bally Midway’s Spy Hunter (1983) and Atari’s police-themed APB (1987) was obvious.

Buildings were simplistic polygon structures covered in bitmap textures, so scaling and movement retained a good degree of 3D realism – though full polygon use would have to wait until GTA3. While the graphics were impressive enough, with silky smooth scrolling accompanying the fast-paced, multi-sprite action, GTA was always more about style rather than pushing the boundaries of cutting-edge visuals.

Plenty of Grand Theft Auto gameplay staples were introduced. Your chosen gangster gleans his criminal jobs from public payphones, or a jacked car may come with its own sub-job to keep you busy. Sometimes a fast and furious approach is best, sometimes creeping around back streets to avoid the cops is better. 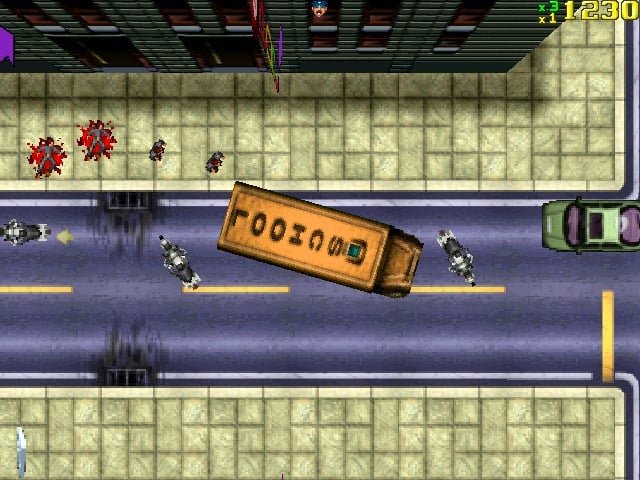 Steal a school bus if you dare

When the cops do get a sniff of you, dealing with them leads to more decisions: do you run away so the heat disperses, or gun them down – even run them over – before they radio for backup?

Cult flick Death Race 2000 was clearly inspirational, for just like Carmageddon, also released in '97, GTA encouraged players to win points for road kill, criminal damage and immoral activity generally. Your aim is to gain enough points – money, basically – to reach the next level, though you may wish to part with some cash for a spray-paint job on your latest get-away vehicle – which will also fool the cops.

Or how about added munitions? Pistol, machine gun, rocket-launcher or flame-thrower – each has its own pros and cons – with the humble fist quite practical for short-term knockouts. There was even a hidden burp and fart option befitting the humorous, cartoon-grossness found throughout. 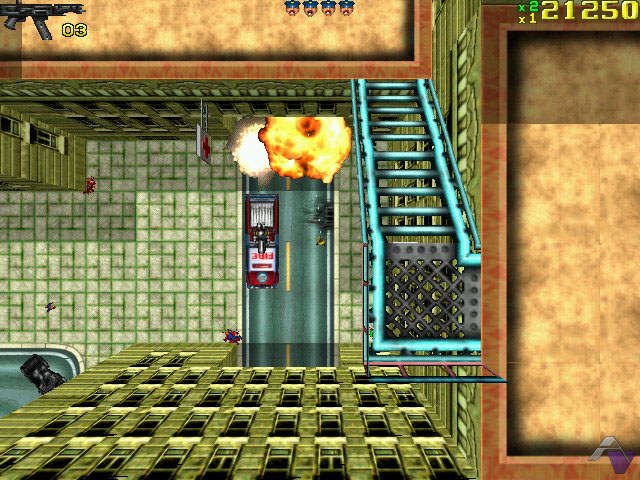 Even fire engines are fair game

The inclusion of wide-ranging player choices made GTA a key forerunner to today’s "sandbox" free-reign gaming experiences. On first playing, the temptation to experiment by running people down – or car-jacking the most outrageous vehicle possible – seemed so gloriously immoral that it just had to be done.

Even when back on criminal track, the three distinct, sizeable cities you could explore contained such a wealth of fascinating back streets and sub-plots that at times you lost confidence in the concept of being on the right road for gangster success.

No matter: the backbone of the major jobs would bring you back in line eventually. No doubt console role-playing and PC god games had been inspirational, but it was still a fantastic way to structure the action. It’s no surprise that GTA5 takes the idea of an explorable world many levels higher than the original, but the beginnings were certainly there in GTA. 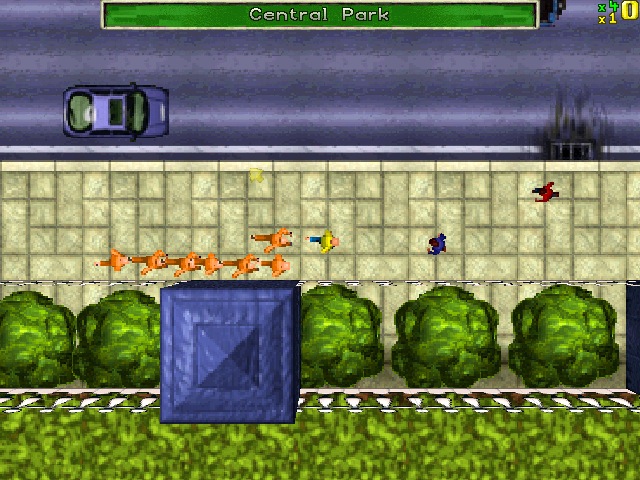 GTA’s network support was a worthwhile feature, albeit over a LAN or using a null-modem cable to link two machines together. You had to wait for GTA2 before you could play internet-linked games. Again, the chance to maliciously interfere or double-cross a friend’s game progress was such a temptation it was pretty much a given that it would occur. Smiles all round indeed.

Next page: Will someone think of the children?
Page:
Corrections Send us news
72 Comments