Quantum computing watchers are familiar with the idea of entanglement – the “spooky action at a distance” that gives rise to quantum teleportation. Now, a team led by the University of Queensland is claiming a different kind of first: quantum teleportation between two spots on a single chip.

That might seem unnecessary, since on-chip communications can be accomplished easily enough using electricity, but as Dr Arkady Fedorov of the university's ARC Centre of Excellence for Engineered Quantum Systems explained it's an important step to creating usable quantum computers.

“This was a proof-of-principle experiment,” Dr Fedorov told The Register. Its aim was to demonstrate that an entirely solid-state device could be created that allowed entanglement of macro-scale structures, and that microwaves could be used on the chip to mediate the entanglement interactions. 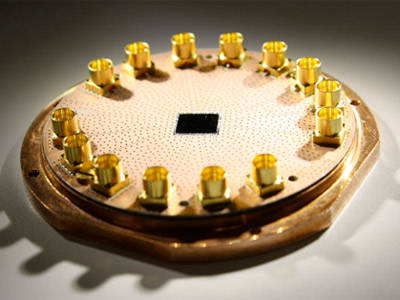 (And yes: what look like microwave coax connectors are just that.

The microwaves measure the qubits.

The device consists of aluminium structures forming the qubits, a superconducting microwave cavity on-chip acting as a “quantum bus”, and resonators to trap the electromagnetic field so that the qubits' state can be mediated and observed.

Instead of single atoms, Dr Fedorov said, the team created 0.2 mm aluminium structures that they were able to treat as “artificial atoms” – qubits that could be put into entangled states. To communicate the qubits' state, the researchers created superconducting waveguides on the chip, with microwave rather than optical photons to mediate the quantum interactions.

Those waveguides also acted as the “classical-quantum interface”, since they can be measured and controlled using electrical signals.

“Our 'artificial atoms' … at the moment they're the world's most advanced solid state quantum objects,” Dr Fedorov said.

The solid-state system is also a lot more deterministic than photon-based entanglements, he explained. “In optics, you might have to send a million photons through a crystal before you get one entanglement … which means you discard a lot of measurements.

“We can create entanglement with much more certainty,” he said.

By extending the system to communicate entanglement across multiple chips, he said, the experiment could help contribute to the development of quantum computing and quantum communications schemes.

Already, he explained, researchers are working on suitable microwave-to-optical (and vice versa) interfaces. This would (in theory) allow entanglement to be created across fibre-optic distances rather than in the short distances demonstrated in this experiment.

The work has been published in Nature, abstract here. ®