If we're all filthy rich, why haven't we become immortal? 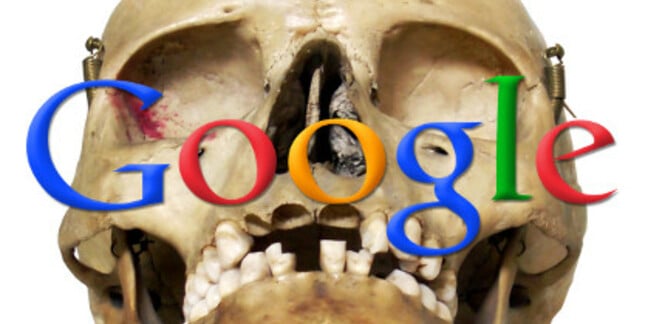 Google has helped found a company that will focus on life extension technologies, presumably because if you die, then you can't click on ads.

The death-defeating company "Calico" was announced by Google chief Larry Page in an insubstantial blog post on Wednesday, along with a PR-puffed article in Time magazine.

Calico's chief exec will be Arthur Levinson, who chairs both ​Genentech and Apple and who will continue on in both roles while running the company.

"With some longer term, moonshot thinking around healthcare and biotechnology, I believe we can improve millions of lives. It's impossible to imagine anyone better than Art – one of the leading scientists, entrepreneurs and CEOs of our generation – to take this new venture forward," Page said in a canned quote.

The only fact about Calico to squeak through the plasticized fact wall created by Google's PR team is that the company will "use its core data-handling skills to shed new light on familiar age-related maladies," according to a Time magazine article on the company.

"Art and I are excited about tackling aging and illness. These issues affect us all – from the decreased mobility and mental agility that comes with age, to life-threatening diseases that exact a terrible physical and emotional toll on individuals and families," Page wrote in a post to Google+. "While this is clearly a longer-term bet, we believe we can make good progress within reasonable timescales with the right goals and the right people."

With Calico, Google is hoping to tackle something that has a dramatic effect on its core business of advertising – namely the tendency for its richer, older users to die and deprive the Chocolate Factory of ad revenue. ®