The two lawmen who fired up the Secure Our Smartphones Initiative – an effort to get smartphone makers to install kill switches in their handsets – have kind words for Activation Lock, the feature of Apple's iOS 7 that allows users to remotely wipe their iDevices, and which requires their owners' Apple ID and password to be entered before the device can be reactivated.

"After months of pressure from a global coalition of elected officials and law enforcement agencies, we are pleased that Apple is set to release a new mobile operating system that includes a theft deterrent feature called Activation Lock," wrote San Francisco district attorney George Gascón and New York attorney general Eric Schneiderman in a joint statement. "This is an important first step towards ending the global epidemic of smartphone theft."

Gascón and Schneiderman, however, stopped short of calling the feature the end-all and be-all of smartphone and tablet security. "While it is too early to tell if Activation Lock will be a comprehensive solution to the epidemic of 'Apple Picking' crimes that have victimized iPhone and iPad owners around the world," they write, "we believe it is a step forward and strongly urge iPhone users to download iOS 7, and most importantly, ensure they utilize both an Apple ID and Find My iPhone."

Activation Lock requires that the user have an Apple iCloud account – the basic service is free – and that they enable its Find My iPhone feature. If your iDevice is lost or stolen, iCloud will display its location on a map; you can then choose to play a sound, lock it down, or wipe it clean.

Should you choose the nuclear option, your device will no longer be able to be tracked or located, but you can enter a message in iCloud that will be continue to be displayed on it, an option also available in the less-destructive "Lost Mode". To reactivate the device, you – or the miscreant who lifted it – will need to enter your Apple ID and password.

Needless to say, for this scheme to deter "Apple Picking", the word needs to get out to the thieving community that snatching an iPhone won't be remunerative – and that could take time, Gascón and Schneiderman admit.

"Even if Activation Lock proves effective," their statement continues, "thieves will not react overnight. Accordingly, it is vital that consumers are aware of their surroundings at all times, especially when using their smartphones in public places." Reasonable.

Schneiderman began his kill-switch crusade this May, and was soon joined by Gascón. The two launched the "Secure Our Smartphones" initiative in June, described by them as "a groundbreaking coalition of state Attorneys General, major city Mayors, District Attorneys, major city Police Chiefs, state and city Comptrollers, public safety activists and consumer advocates from around the world." 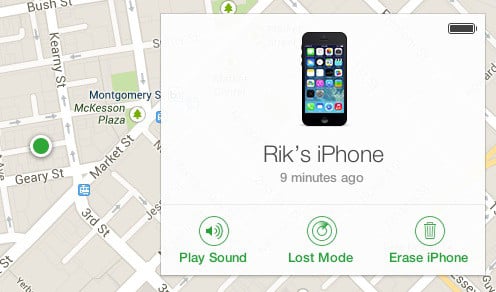 'Ah, I seem to have left my iPhone on my desk at Vulture Annex'

After Apple announced Activation Lock during its iOS 7 rollout at their Worldwide Developers Conference, also in June, Gascón and Schneiderman were initially cautious about endorsing it, taking instead a wait-and-see attitude – a completely reasonable position at the time, seeing as how Apple's software headman Craig Federighi provided precious few details of its capabilities during his iOS 7 presentation.

With Wednesday's release of iOS 7 and Thursday's statement now on the books, it appears that Gascón and Schneiderman like what they see – at least as a "first step." ®