Office 365 goes to work on an Android

Hands on Unlike the video editing or CAD workstation beasts that are still utterly reliant on Windows, Android is slowly evolving into a workable platform for basic productivity.

Browsers are becoming passable. Onboard applications are decent and there are an ever-growing number of applications designed for both touch input and mouse.

Yes, our little Android is growing up – that is, of course, if we ignore the total lack of a usable productivity suite.

Android is sneaking up on five years of general availability and it still doesn't even have a word processor that can compete with Microsoft Word 2.0 running on Windows 3.1.

If you want to paw at your screen like a primitive, there are plenty of applications to let you consume content others have made. There are even a few applications that will let you edit a word document or enter some numbers into a spreadsheet. Slowly.

Touch input has severe limitations. The first is a maddening upper limit on input speed and accuracy defined by trying to hit touch targets that are significantly smaller than your fingers and offer no tactile response whatsoever. Editing, formatting and related tasks are byzantine in a touch-screen world. 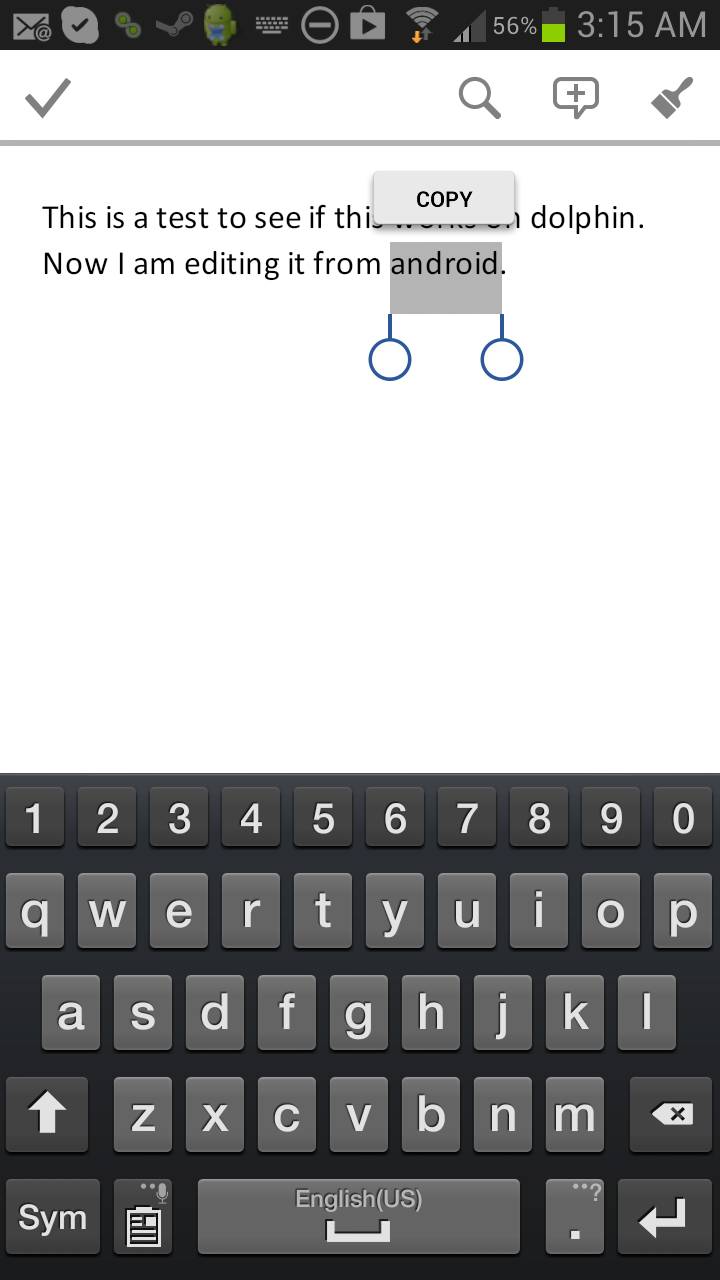 Consider the humble task of highlighting a block of text. On a touch screen you have to stab exactly the right spot, hope the device recognises the great big blob that is your finger, press, hold and then wait for the selector widgets to pop up.

After that you drag them around until you have highlighted the relevant text, go find a touch target that says "cut" or "copy" and then do something with that text.

In the time it has taken a touch-screen user to do that, I have already moved the text where it needed to go and written another four paragraphs of useful text. Touch screens are simply terrible for real work.

One man and his mouse

Despite this, I keep getting users who want me to make their Android devices into all-purpose endpoints. They have an Android phone with four cores and more RAM than that Acer Aspire from the mid-2000s that is wheezing its last.

They have a Nexus 7 or an Asus Transformer that they carry everywhere and they don't want to haul around some ageing notebook that gets the digital equivalent of three miles to the gallon and doesn't make it through a full-day conference.

Android is not going away, so how do we get something usable on there? The answer depends entirely on the device you have, the version and all the other irritating little things that make Android ecosystem fragmentation such a topic of legitimate complaint from developers.

In my opinion, the best option currently available for a productivity app running directly on an Android device is Office 365's web app. The latest version is amazing. It beats Google's efforts and is so far ahead of everyone else that at this point trying to catch up would be a depressing endeavour. 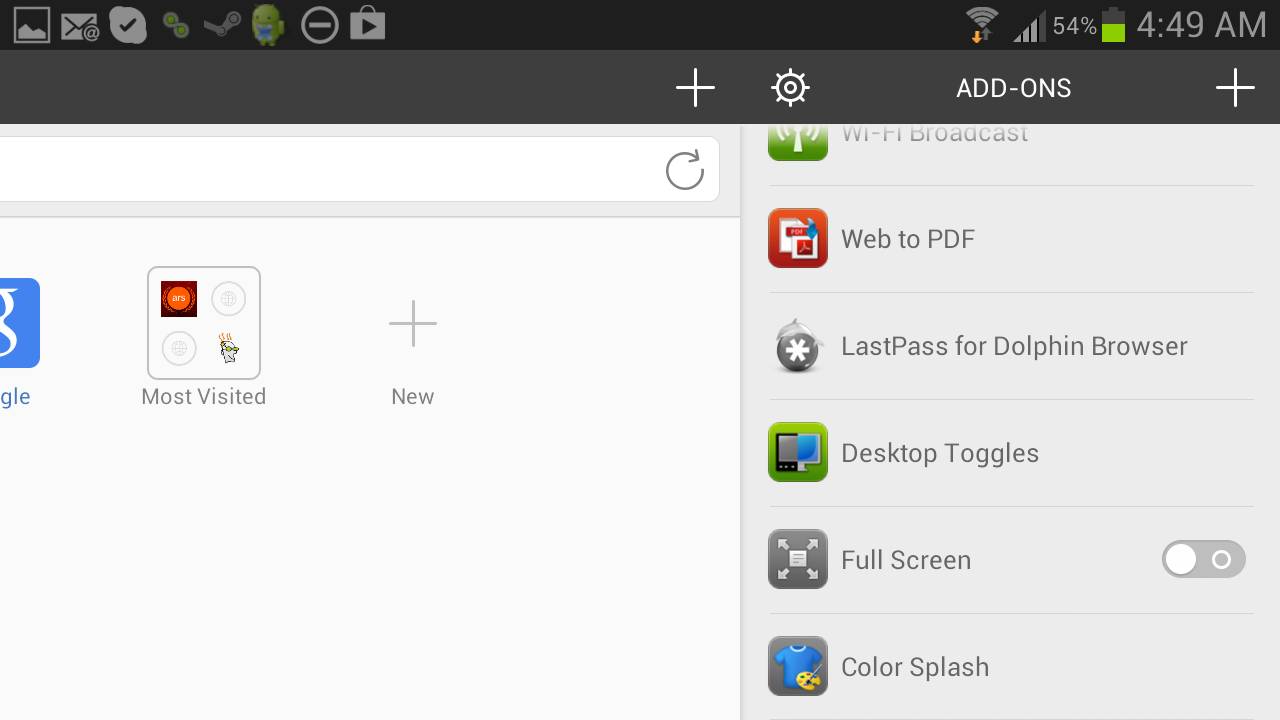 To get the Office 365 web app working on an Android device – assuming you have a subscription – you need to set your browser to request the desktop site.

Chrome can do this out of the box. Dolphin can do it by enabling the "desktop toggles" extension. Unlike Chrome, when you turn the extension on in Dolphin it stays on and passes desktop headers to all future sites. 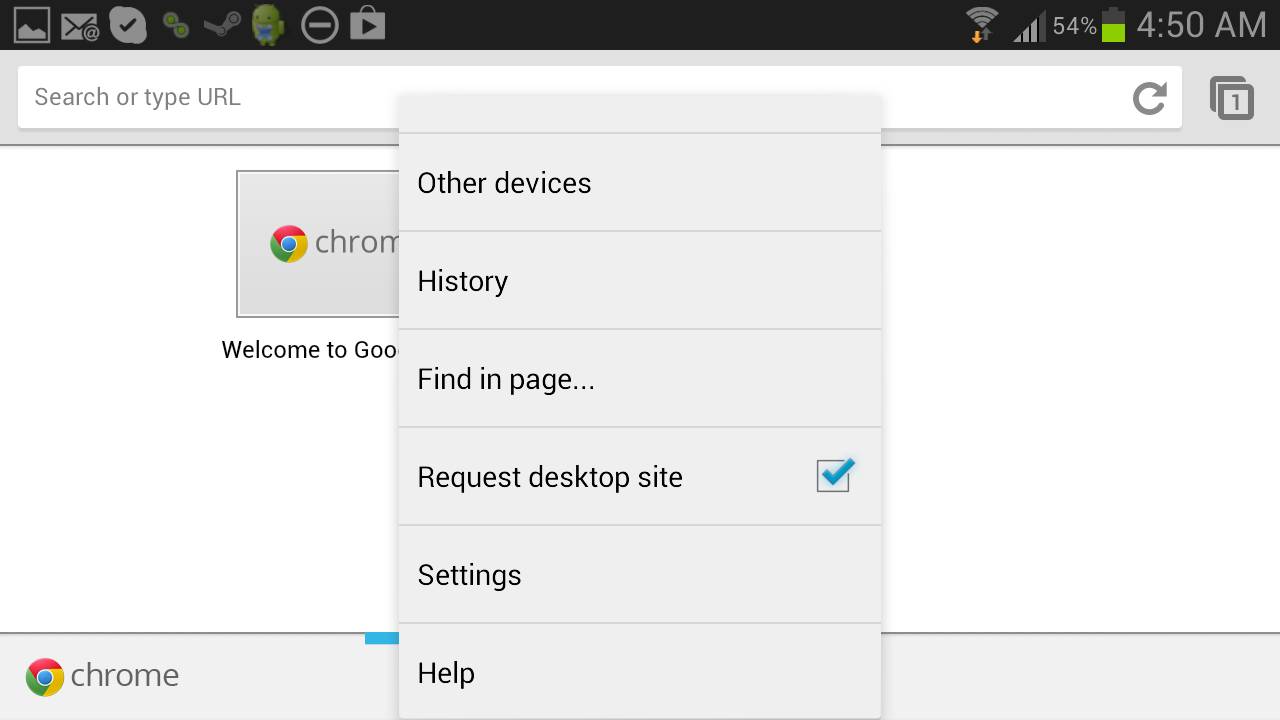 The problem is that the Office 365 web app simply doesn't work on most Android devices. Chrome flatly refuses to treat the mouse like a mouse. You can't highlight things like an adult and forget right-click context menus.

Dolphin is somewhat better. It doesn't understand the concept of multiple buttons on a mouse and thus you can't get your right-click context menus, but at least it passes the primary mouse button back to the Office 365 application so we have highlighting, dragging and dropping.

Office 365 is actually rather well designed for single mouse button scenarios, so although the lack of a context menu slows me down, it is not a show stopper. 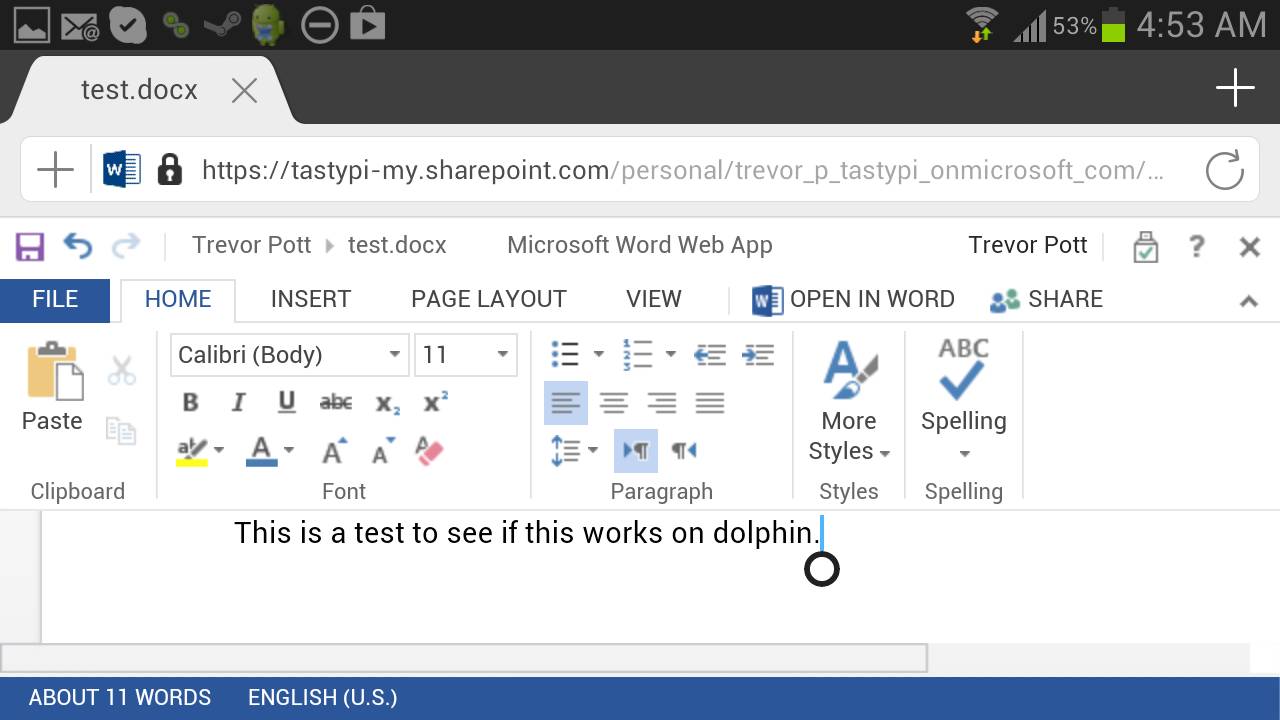 Hardware definitely limits possibilities. My first-gen Asus Transformer's 1GB of RAM simply isn't enough. The anaemic Tegra 2 struggles to keep up, and frankly the whole thing is a mess.

The quad core and 2GB of RAM in my Galaxy Note 2, however, seems to do the trick. Dolphin has no trouble here. Off I go writing articles.

Microsoft has created a downloadable Office 365 app for Android phones. That naturally lasted about eight seconds after the announcement of availability and you have to be deaf, dumb and blind not to be able to find the .apk file if you go looking for it.

At first, I was rather irked with Microsoft. I figured it was doing something irritating like protecting its office monopoly by restricting the Office 365 app to phones.

But the rationale is far more mundane. In truth, the app is exactly right for a phone and useless for a tablet.

You won't be writing articles on a phone. Not even a Note 2. (I have tried. It causes all of the sads.) You might open a document, make a few token changes and save it… and that is all the Office 365 app is good for, though you can create documents and spreadsheets if you wish. 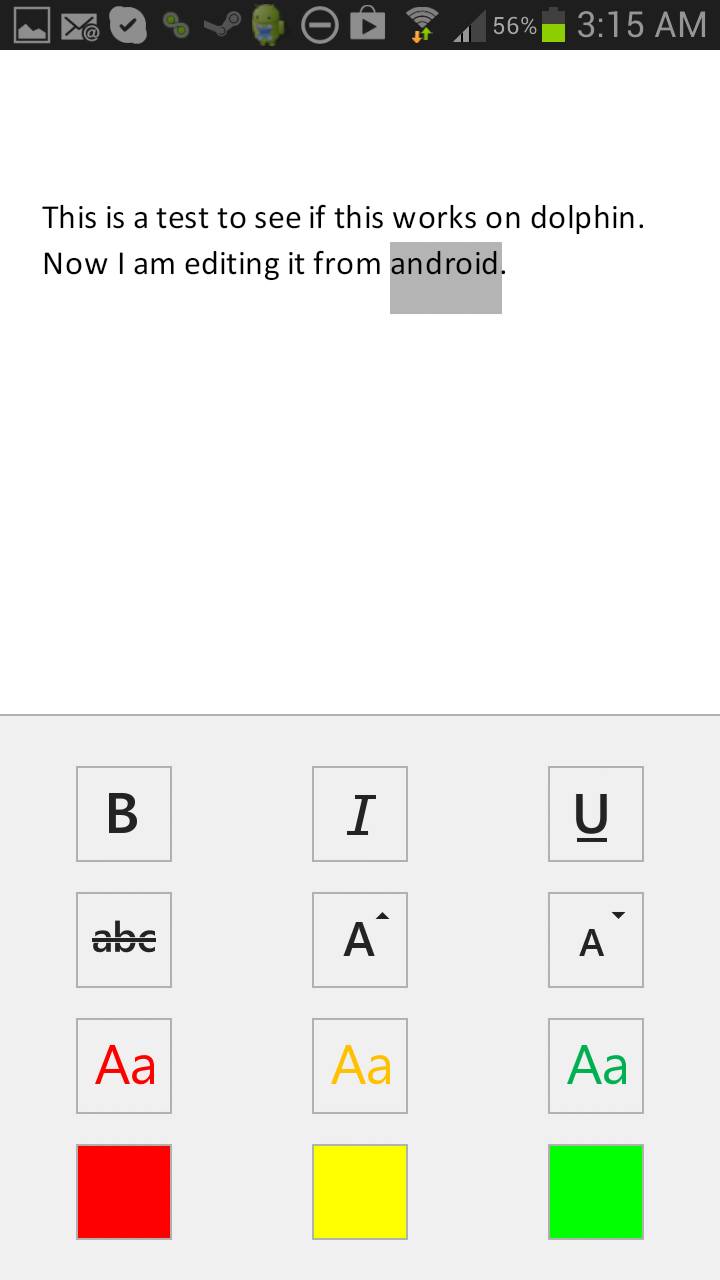 Microsoft's efforts with the Office 365 app are in line with the previous yeoman's work done on the OneNote and Lync apps. They are absolutely top-quality applications for the intended target market.

I expect Microsoft will have to write a separate Office 365 app for Android tablets, assuming we can convince it that there is enough of a target market there to care about.

The more important question for Android users is why would Microsoft be interested in jump-starting the Android tablet market?

Anyone who starts using Android tablets for productivity won't be coming over from Apple. They would be choosing Android instead of Windows and there is not much profit in that for Microsoft.

In almost every technical aspect¸ Windows RT is a better operating system. The problem is that Microsoft blew the launch and missed a very narrow window.

The tablet market is still very much up in the air

Microsoft completely miscalculated the price people would be willing to pay, didn't include Outlook, had no app ecosystem to speak of and artificially restricts developers and end-users from turning Windows RT into a full-blown productivity device.

Despite this, the tablet market – and dominance of the next generation of endpoints – is still very much up in the air. Google constantly machine guns its own feet with exactly the same sort of short-sighted protectionist nonsense that has been hindering Microsoft for years.

The allergy to mice in Chrome for Android is one example: Google sees mice in Android as a massive threat. Android is local-application based.

If people could use a keyboard and mouse with Android properly, then they would have no reason to move away from the local-application model. Google's future is bet on SaaS applications and tied to Chrome OS.

Under no circumstances does Google want Windows to be replaced by Android. Android could fork and suddenly Amazon is somehow a player. Google wants you in the browser where it can own you. 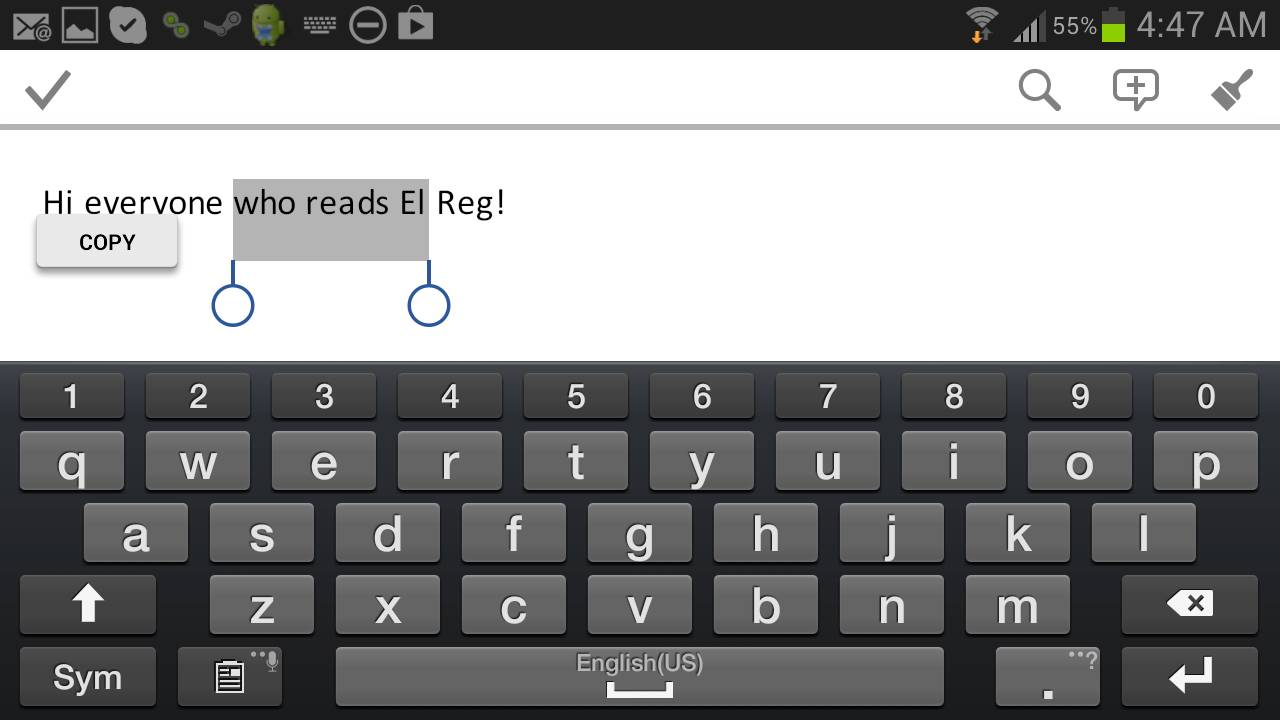 When push comes to shove, however, what people actually want is Microsoft Office on their Android devices. We can get it on our phones. The lucky few can get a mostly working version in their browsers. The rest of us will work around the limitations and wait.

The redefinition of the endpoint brought about by the mobile revolution is still underway. With the release of a working Office app for Android phones – something once considered an outright fantasy – all bets are off.

What are your thoughts on how it will turn out? Answers in the comments please.

Full set-up instructions for Office on Android are here. ®

Zoom adds email and calendar to its apps, to relieve the crushing burden of ALT-TAB