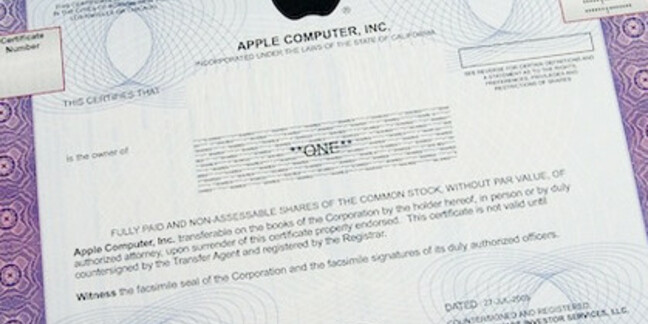 In a filing with the US Securities and Exchange Commission, Apple has announced that it now expects its revenue to come in at the high end of the range it projected when it announced its financial results for its third fiscal quarter of 2013 this July.

In the filing this Monday, Apple CFO Peter Oppenheimer cited the sale of nine million iPhone 5s and iPhone 5c units in the three days since their release last Friday.

Expectation-management is everything when dealing with Wall Street, and such tools as SEC filings can be used to put a rosy gloss on the figures that analysts will concoct in the run up to Apple's financial report for its current quarter, which ends this Saturday.

Apple has not yet said when those numbers will be released, but last year's report for Cupertino's final quarter of its fiscal year was published on October 25, 2012. In that quarter, Apple's revenues were $36bn, and gross margins were 40 per cent.

As of Monday, Yahoo! Finance's poll of 47 analysts prognosticates revenues for Apple's current quarter to come in at an average of $36.1bn, with a low estimate of $34.5bn and a high of $38.13bn. It remains to be seen whether Oppenheimer's SEC filing will inspire any change in those numbers.